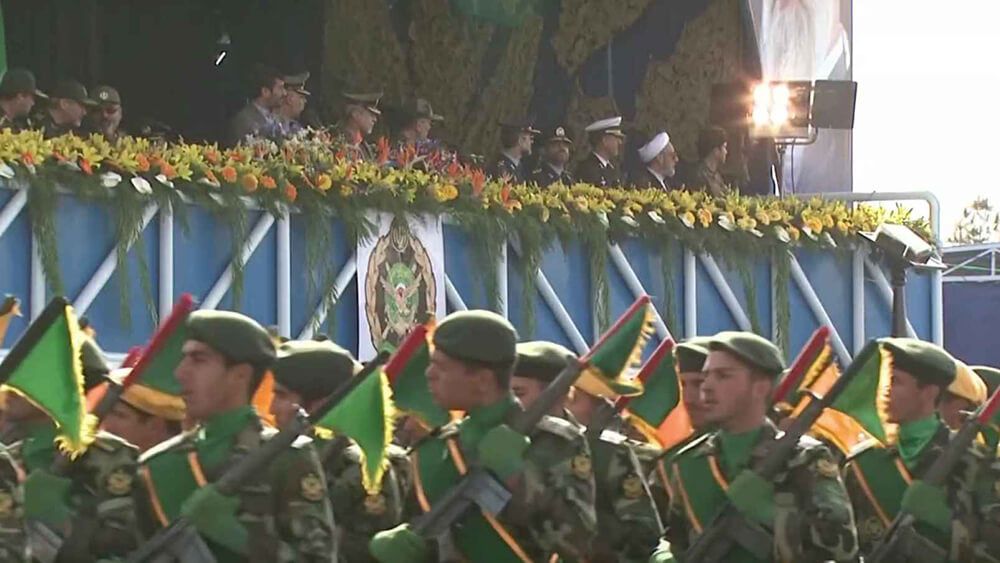 President Trump has decided to designate the Iranian regime’s Islamic Revolutionary Guard Corps (IRGC) as a Foreign Terrorist Organization (FTO) to counter Iran’s global campaign of terrorism. “This unprecedented step, led by the Department of State, recognizes the reality that Iran is not only a State Sponsor of Terrorism, but that the IRGC actively participates in, finances, and promotes terrorism as a tool of statecraft,” President Donald Trump said in a statement Monday morning. “This designation will be the first time that the United States has ever named a part of another government as a FTO.” The designation takes effect on April 15th.

The Iranian regime lives and breathes Islamic extremism, which it seeks to export through its global jihad terrorist network. The IRGC sits at the center of that terrorist network. It provides funding, equipment, training, and logistical support to terrorist proxy groups, including most notably Hezbollah in Lebanon and Syria. The IRGC has American blood on its hands, going as far back as bombings in Beirut at the Marine barracks in 1983 and at the U.S. Embassy annex in 1984. The IRGC also caused casualties to U.S soldiers in Iraq by providing roadside bombs to its proxies.

As Special Representative for Iran and Senior Adviser to the Secretary of State Brian Hook explained on Monday, “The IRGC has been threatening American troops almost since its inception. And whenever we impose sanctions on Iran, it’s usually followed by a range of threats. What endangers American troops in the Middle East is an IRGC that operates with impunity and never has its ambitions checked in the Middle East. We’re taking an entirely new approach to this of significant sort of sustained maximum economic pressure to deny the IRGC and the Iranian regime of the revenue that it needs to conduct its foreign policy.”

The IRGC has sustained itself financially over the years through its deep penetration into virtually all major facets of Iran’s economy, including its black markets. Countries, companies and individuals that do business with the IRGC and the many enterprises it controls are supporting what Mohsen Sazegara, a founding member of the Islamic Revolutionary Guard Corps and now a U.S.-based dissident described, according to the Council on Foreign Relations, as “something like the Communist Party, the KGB, a business complex, and the Mafia.” Add to that sinister profile a well-funded global terrorist enterprise.

President Trump’s decision to designate the IRGC as a whole as an FTO builds on previous steps taken against the IRGC. In 2007, the IRGC’s “elite” paramilitary Quds Force was subjected to terrorism-related Treasury sanctions for providing material support to the Taliban, Hezbollah, Hamas, Palestinian Islamic Jihad, and the Popular Front for the Liberation of Palestine-General Command. The Quds Force has been the leading arm of the IRGC used to export the Iranian regime’s brand of Islamic extremism and to support terrorist groups to that end.

However, while the Quds Force is the tip of the IRGC’s spear, it is far from being the entire spear. The IRGC has five branches (Ground Forces, Air Force, Navy, Basij militia, and Quds Force special operations) in addition to a counterintelligence directorate and representatives of the regime’s Supreme Leader. The IRGC oversees the Iranian regime’s ballistic missile program. In October 2017, the U.S. Treasury labeled the IRGC itself as a Specially Designated Global Terrorist for its activities “in support of the IRGC-Qods Force (IRGC-QF) … for providing support to a number of terrorist groups, including Hizballah and Hamas, as well as to the Taliban.”

President Trump has now upped the ante further by designating the IRGC altogether as a Foreign Terrorist Organization in its own right, based on the finding that the IRGC meets the legal criteria of engaging “in terrorist activity or terrorism” which “threatens the security of United States nationals or the national security of the United States.”

The IRGC has moved from being treated as a supporting actor in providing backing for terrorism that its proxies undertake to an organization branded as directly engaging in terrorism itself. As Secretary of State Mike Pompeo put it in his remarks to the press on Monday, “The IRGC will take its rightful place on the same list as terror groups its supports: Lebanese Hizballah, Palestinian Islamic Jihad, Hamas, Kata’ib Hizballah, among others, all of which are already designated as foreign terrorist organizations.”

The IRGC’s designation as a Foreign Terrorist Organization triggers the provisions of a law making it a federal criminal offense punishable by up to 20 years in prison for any person in the United States or subject to the jurisdiction of the United States to knowingly provide material support or resources to a designated Foreign Terrorist Organization. Material support or resources include any property or service, money, financial services, lodging, training, expert advice or assistance, safehouses, false documentation or identification, communications equipment, facilities, weapons, lethal substances, explosives, personnel or transportation.

The prohibition against providing material support or resources to the IRGC as a designated Foreign Terrorist Organization would appear to preclude any individual or company subject to U.S. jurisdiction from doing business with any individuals or entities affiliated with any part of the IRGC and/or the vast pieces of the Iranian economy it controls. Secretary of State Pompeo offered some direct advice that Iran’s friends in Europe should heed: “If you’re the general counsel for a European financial institution today, there is more risk. I think this will require more diligence be done by every business that is considering doing things that are even now second and third orders removed from what you might think of as a traditional connection to the Iranian economy.”

President Trump’s latest move adds even more economic pressure on the Iranian regime and its principal arm for the spread of terror in the name of jihad. It has further isolated this arm, the Islamic Revolutionary Guard Corps, placing it in the same rogues’ gallery of designated Foreign Terrorist Organizations as ISIS and al Qaeda. The designation strips away any pretense that the IRGC serves any legitimate governmental function whatsoever or that it will not hesitate to use its control of vast sectors of the Iranian economy to feed the terrorist monster it has created and nurtured.

President Trump is forcing other countries to make a choice. Either join the United States in combating the increasing danger that the Iranian regime poses to peace and security through maximum economic pressure or the United States will be willing to go it alone as the leader of the free world. Anyone who gets in the way will do so at their own peril.