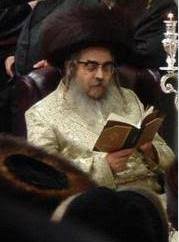 After accepting an invitation to meet with Prime Minister Benjamin Netanyahu, the Vizhnitzer Rebbe came under fire from his brother-in-law, the Satmar Rebbe for participating in the meeting on ideological grounds.

HaRav Yisroel Hager, shlita,  (the Vizhnitzer Rebbe), from Bnei Brak met with the prime minister met on Lag Ba’Omer evening in a rare meeting at his official residence in Balfour.

The purpose of the meeting was to ensure the maintenance of the status quo on religious and army recruitment matters prior to the signing of a coalition agreement with Yahadut Hatorah, according to a report on the Matzav.com web site.

Because this was a high profile meeting, details were kept under wraps until the meeting concluded.

The 45 minute meeting was at the invitation of Netanyahu and the Vizhnitzer Rebbe, shlita traveled from Chatzor Haglilit (where he has been residing during the coronavirus lockdown) to the prime minister’s  residence on Balfour Street in Jerusalem.

Matzav reported that the Rebbe thanked Netanyahu for what he has done and is doing for Israel, emphasizing his efforts in the fight against corona.

HaModia reported that the Rebbe said, “We see that in Eretz Yisrael we have a special siyata Dishamaya, protection from Above,”  noting the small number of fatalities compared to other countries.

The details of the discussion between the two have not been made public but the Rebbe said he was “on a mission for the people of Israel.”

Netanyahu recalled his grandparents lineage and told the Rebbe that they had come from Volozhin.   Netanyahu’s grandfather was Rav Nosson Melikovsky, according to the HaModia report.

After hearing of the meeting, it was reported by VIN News that the Satmar Rebbe, shlita spoke at a special Le’Chaim tish (celebration) for a small number of his associates marking the Yahrzeit of Rabbi Nachum of Chernobyl, one of the early Chasidic rebbes and a disciple of the Baal Shem Tov.

HaRav Aharon Teitelbaum (the Satmar Rebbe) was reported to have lambasted his brother-in-law for even participating in a meeting with a secular leader of the Jewish state.

According to the VIN report, Rabbi Aharon was visibly anguished upon learning of the meeting and allegedly said that it was foolhardy to meet under the circumstances that have been presented by the virus.

He said: ”After months of isolation far away from the chasidim, with no public prayers, no tish, no reception of chasidim for private meetings, no sandek (holding the baby at a circumcision) honors, all due to the fear of not being in the same house with a person sick with coronavirus and being infected, after all this he went to the house of the head of the unbelievers, the person who spreads the belief in “our might and power”, the person who has no derech eretz (courtesy) and no respect for G-d? Wasn’t he afraid to sit in his house together with him where he could be infected with spiritual diseases?”

VIN reported that Rav Aharon added: “I don’t understand him. Today is the yahrzeit of our grandfather, the Magid of Chernobyl. It is well known that ‘cherna’ means black in Russian and ‘bila’ means white. One should know how to distinguish between black and white and it is forbidden to mix between them.”

The chasidim said that the Rebbe kept saying: “how low can they stoop, those who go to elections and participate in the government.”

VIN reported that the Vizhnitz chasidim responded on the Bechadrei Chareidim site, stating that: “The Satmar rebbe must not know his brother-in-law properly, the rebbe would be willing to pay him the airfare and give him his Beis Midrash so that he can protest against him. Our rebbe is performing his method of Avodas Hashem (service of G-d) and he does not care for his honor the slightest bit, nor is he concerned what people will say.”