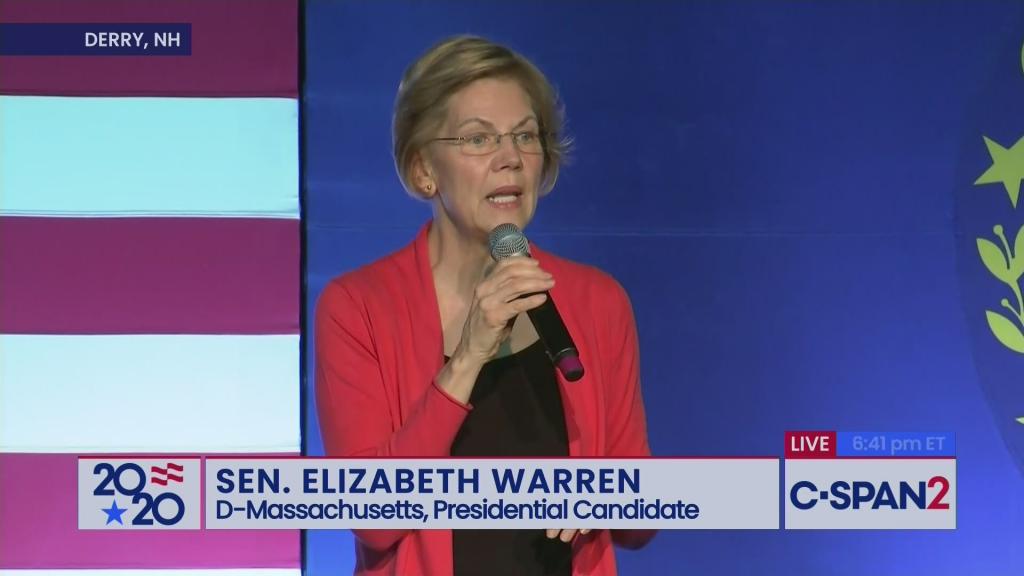 Sen. Elizabeth Warren indicated she would skip the pro-Israel lobby AIPAC’s conference next month by saying "yeah" to the questioner and did not push back against assertions made about the lobby. Photo Credit: C-SPAN

While campaigning in Derry, New Hampshire, Senator Elizabeth Warren (D-MA)was asked a question by a young woman who identified herself as an American Jew, earlier this week. The woman claimed that AIPAC, the nation’s largest and most influential Israel lobby group, is  “forming alliances” with “Islamophobes, anti-Semites and white nationalists,” and asked Warren if she would be willing to forego attending the upcoming AIPAC conference as she had done last year. The woman also wanted Warren to advise other Democratic candidates for the White House in 2020 to turn down invitations to AIPAC conferences.

“I’m an American Jew, and I’m terrified by the unholy alliance that AIPAC is forming with Islamophobes and antisemites and white nationalists,” the audience member began.

Adding that “no Democrat should legitimize that bigotry by attending their annual policy conference,” the questioner told Warren that she had been “really grateful” for the candidate’s decision to miss AIPAC’s 2019 forum.

“Will you join me in committing to skip the AIPAC policy conference this March?” the questioner asked.

Sen. Elizabeth Warren indicated she would skip the pro-Israel lobby AIPAC’s conference next month by saying “yeah” to the questioner and did not push back against assertions made about the lobby, according to a JTA report. Algemeiner reported that her follow-up remarks did not mention AIPAC, and were confined to an endorsement of a political solution to the Israeli-Palestinian conflict that would ensure the Jewish state’s “protection” as well as provide “self-determination and dignity” for the Palestinians.

The Jewish anti-occupation group IfNotNow said that the questioner, identified as Sarah O’Connor, was acting on its behalf, according to the JTA report.

Algemeiner reported that among those criticizing Warren for not challenging the questioner about her erroneous claims that AIPAC was affiliated with racists was the American Jewish Committee (AJC).

In a tweet addressed to Warren, AJC pointed out that AIPAC was a “pro-Israel voice that agrees with you about the need for a two-state solution negotiated by both sides.”

The tweet continued: “We hope you find an opportunity to clarify that you do not agree with the questioner’s baseless and offensive characterization of the organization.”

Other commenters similarly criticized Warren — among them former Trump administration adviser Jason Greenblatt, according to the Algemeiner report.

JTA reported that that in a joint statement released Friday with three other “progressive” groups — Indivisible, MoveOn, and the Working Families Party — IfNotNow echoed the language O’Connor used with Warren and said it was launching a campaign, #SkipAIPAC, to pressure other candidates not to attend the conference.

“Israel’s decades-long occupation has eroded the bipartisan consensus on Israel and AIPAC, in a last-ditch effort to maintain influence, now anchors an unholy alliance with anti-Semites, Islamophobes and white nationalists,” IfNotNow co-founder Emily Mayer claimed. “This unholy alliance shields the Israeli government from any consequences for its actions and pushes for a blank check that has had disastrous effects for both Palestinians and Israelis. No Democrat should give AIPAC political cover with their presence.”

Warren said that she is committed to a two-state solution and to being a “good ally” to both Israel and the “Palestinians,” as was reported by the JTA.

“We’re not doing that if we keep standing with one party and saying, ‘We’re on your side, we’re going to give all the things you asked for,’ for all kinds of political reasons domestically here and domestically in Israel,” she said.

AIPAC traditionally invites presidential candidates to address its annual March gathering in election years. A boycott of the conference by Democratic candidates would signal how toxic the group has become among the party’s progressives, for whom Warren is a flag bearer. So far no other candidate has yet committed either way, but Vermont Senator Bernie Sanders, Warren’s rival to lead the party’s progressive wing, has said he has “no objection” to going, according to the JTA report.

“As the 2020 Dems get more & more anti-Israel, will any of them stand up and condemn comments like these?” Sen. Ted Cruz, R-Texas, said on Twitter. “Directly? Or are they too scared of the angry anti-Semitic Left?”