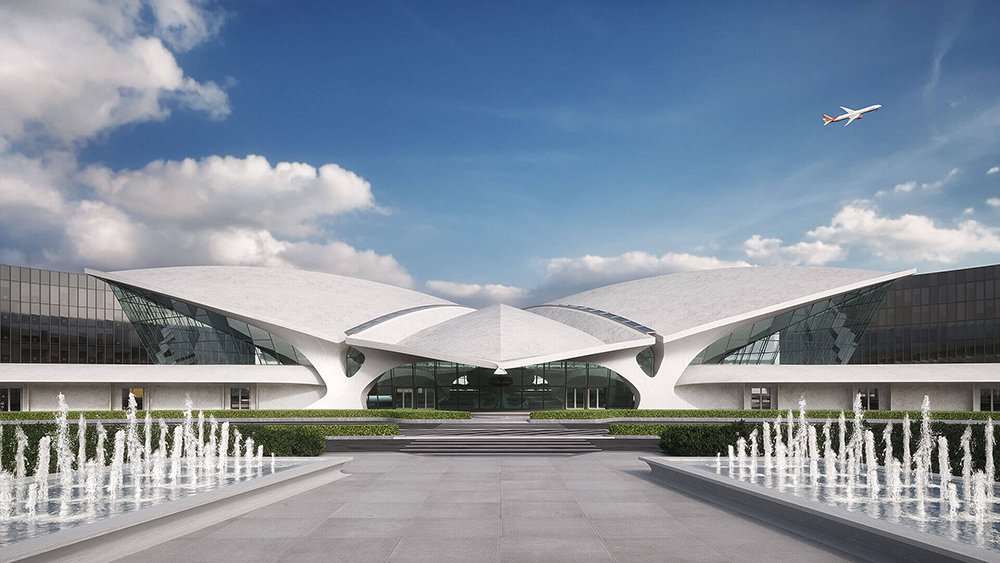 TWA Hotel is a hotel at John F. Kennedy International Airport in Queens, New York, United States, that opened on May 15, 2019. It utilizes the headhouse of the TWA Flight Center airline terminal, designed in 1962 by the architect Eero Saarinen. The TWA Hotel project added two buildings on either side of the existing headhouse.

The TWA terminal closed in October of 2001 following continued financial deterioration during the 1990s and the eventual sale of its assets to American Airlines, it was previously declared a city landmark by the New York City Landmarks Preservation Commission, which prevented its demolition. In 2005, the National Park Service listed it on the National Register of Historic Place.

The two buildings contain a total of 512 rooms between them,] as well as conference space, six to eight restaurants, and an aviation history museum. There is a rooftop infinity swimming pool and an observation deck with 10,000 square feet (930 m2) of floor space. The developers have a 75-year lease with the state. Many of the TWA Flight Center’s original details, such as the custom ceramic floor tiles and the 486 variously-shaped window panels, were replaced with replicas of the originals. These details were intended to give the hotel a 1960s-era vibe, and include brass lighting, walnut-accented furnishings, and rotary phones.

At the end of November, the TWA hotel opened its own ice skating rink, making it an even more interesting attraction.

The new amenity, deemed the Runway Rink, will be located on the tarmac near the hotel’s Connie cocktail lounge (located in a decommissioned Lockheed Constellation airplane), and will open on November 30. In addition to skating sessions, the rink will host shows inspired by Connie’s history, NY Curbed reported.

We’re creating the Rockefeller Center of Queens,” Tyler Morse, CEO and managing partner of MCR/MORSE Development, said in a statement.

Admission to the wintry attraction isn’t all that pricey compared to other NYC ice skating rinks: It’s $15 for adults, $10 for children under 12 years old. Ice skates will also be available to rent for $10 and $8 for children under 12. It’ll be open seven days a week until the end of February.

Other recipients of this year’s preservation awards besides the TWA Hotel at JFK Airport are the Innisfree public garden in rural Dutchess County and the Colored Musicians Club in Buffalo, AM NY reported.

Nominees to the state and national registers include the Broadway Historic District in Monticello, the Forsyth-Warren Farm in Niagara County and the None Such Mincemeat Factory in Syracuse, according to AM NY.