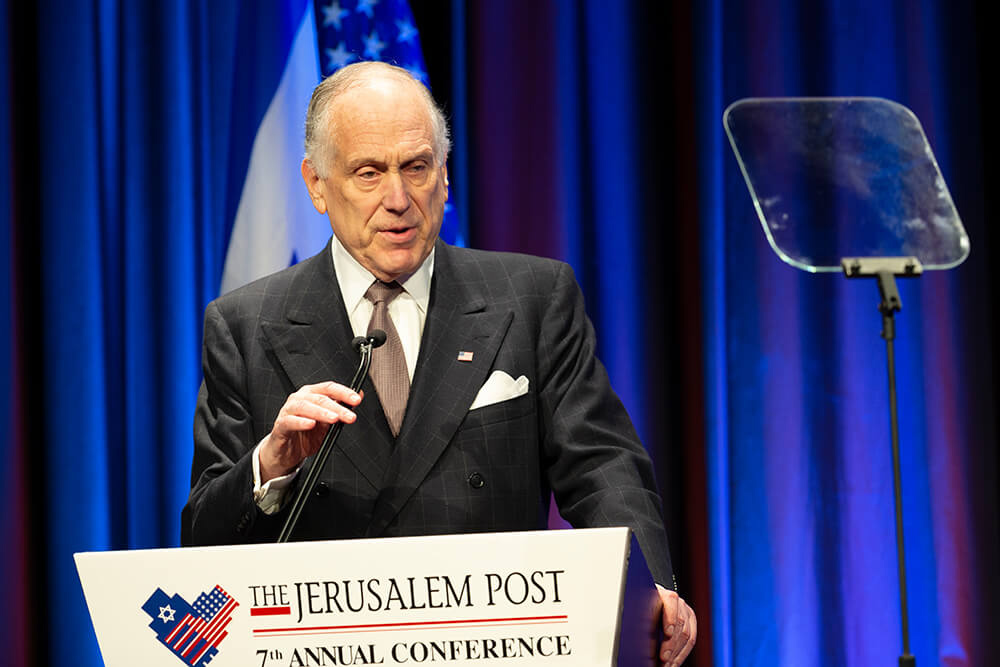 WJC’s Ron Lauder Joins Campaign to Have Kanye West’s Music Removed from Streaming Services
Edited by: Fern Sidman
Condemnation of disgraced rapper Kanye West have been exploding since he began his campaign to denigrate Jews began with a seminal interview on the Fox News Tucker Carlson program weeks ago. Then there was the now infamous meeting with former President Donald Trump when West brought White supremacist pal Nick Fuentes with him as he continued to spew forth more anti-Semitic remarks.

In addition to the Adidas sportswear company dropping Ye and his product line due to the vile Jew hatred that the rapper was promulgating, it was reported that the high end fashion house Balenciaga also severed tired to Ye. Now, it would appear that people are calling for West’s music to be removed from such streaming services as Spotify and Apple.
On Wednesday, the New York Post reported that Ronald Lauder, the president of the World Jewish Congress has joined in on that call, saying that the rapper is “espousing Nazism” and must be deplatformed.

On Tuesday, JNS.org reported that the Change.org petition launched by Nathan Goergen had 65,480 signatures. The petition was set up on Friday following the litany of odious anti-Semitic comments expressed by the rapper on a fairly incessant basis. That included sharing a platform with Fuentes and being interviewed by conspiracy theorist Alex Jones, JNS.org reported.

“I like Hitler,” Ye announced during his recent interview with Jones. JNS also reported that when Jones attempted to say that Ye did not really believe this, the rapper cut him off and insisted that he stood by his statement. Ye’s rhetoric comes as anti-Semitic incidents in the U.S. have hit an all-time high, according to the Anti-Defamation League, as was reported by JNS.

“Our society has no place for people who spread that kind of hate to be making millions off of their work,” Goergen states in the petition while addressing Amazon CEO Andy Jassy. “I call on Apple Music, Spotify, Amazon Music and other streaming platforms to immediately remove all of Kanye West’s solo albums and singles from their platforms.”

In a letter exclusively obtained by the Post and sent to Apple CEO Tim Cook and Spotify CEO Daniel Ek on Wednesday, Lauder called it “unacceptable that neither Apple Music, nor Spotify have removed Mr. West’s music” as the rapper now known as Ye continues to espouse virulent anti-Semitism.

“Kanye West’s anti-Semitic tirades go beyond trafficking in conspiracy theories. He is espousing Nazism in its purest, most hateful form, and is perhaps the singular embodiment of the alarming rise of Jew hatred in America,” the cosmetics heir and Jewish rights advocate said in a statement, as was reported by the Post.

“As long as his hateful voice is carried on Apple and Spotify’s music streaming platforms, they are in league with those who wish harm to Jews the world over,” Lauder added.
Lauder, who was also known as being on good terms with former President Donald Trump also said that by continuing to host West on their platforms, the Apple and Spotify are “profiting off of Jewish hate,” the Post reported.

In October, West announced that he was going on “death con 3” on the Jewish people. It was then that he first expressed his love and admiration for Hitler during an interview with Jones on his InfoWars show.

Many have speculated that West suffers from some form of mental illness as he comes across as totally unhinged in interviews that took place on media outlets way before the anti-Semitic tirades commenced.

The Post reported that West has consistently repeated untrue conspiracy theories about Jewish people, continually associated himself with known racists and his behavior has been viewed as normalizing anti-Semitism.

In terms of the campaign to cut off the lucrative revenue that West generates, the Post reported that Lauder wrote he is “relieved” Adidas ended their partnership with West, but thought “their delay in making what should have been a clear-cut decision to rid their halls of such a dangerous voice is unacceptable.”

The NYPD recorded 45 anti-Semitic hate crimes in November 2022. In November 2021, it recorded 20. According to the data, Jewish New Yorkers were the most targeted group, accounting for 60 percent of all hate crimes that occurred, the Algemeiner reported.
There were several incidents of note in November, including a series of anti-Semitic and racist notes sent to several restaurants in the City Island neighborhood of the Bronx, the shooting of Hasidic Jews with a gel gun, and the uncovering of a plot to attack synagogues in Manhattan, according to the report on the Algemeiner.com web site.

In April, the Anti-Defamation League announced that its annual tally of anti-Semitic incidents reached a record high last year. The AP reported that the organization counted 2,717 incidents of assault, harassment and vandalism in 2021, a 34% increase over the previous year and the highest number since the ADL began tracking the events in 1979.
The Post reported that the World Jewish Congress, founded in 1936, calls itself the “diplomatic arm of the Jewish people” and advocates for Jewish people around the world.