Kanye West: Hitler’s Bad Reputation Was ‘Made by Jewish People’ Who ‘Control the Majority of the Media’ - The Jewish Voice

Kanye West: Hitler’s Bad Reputation Was ‘Made by Jewish People’ Who ‘Control the Majority of the Media’ 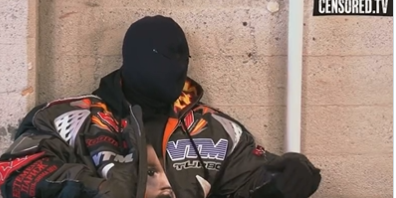 Kanye West continued his antisemitic media tour on Monday with an appearance on Gavin McInnes’ Censored.TV, claiming that Adolf Hitler’s bad reputation was “made by Jewish people ” who “control the majority of the media.”

He also urged Jewish people to “forgive” Hitler. “Let it go. Let it go. And stop trying to force it on other people,” he said.

The latest interview comes as West has doubled and even tripled-down on his antisemitic beliefs by publicly proclaiming his admiration for Hitler and his denial that millions of Jews were killed in the Holocaust.

On Monday, West spoke to McInnes about his recent embrace of antisemitism. During the interview, West wore what appeared to be a Balenciaga hood that covered his entire head and completely obscured his face.

McInnes appeared to try to get West to distance himself from Hitler, saying he has a “pretty bad reputation.”

“Well, who made that reputation?” West replied. “That was made by Jewish people.”

Kanye doubles down on his Holocaust denial and says Hitler has been smeared by the history books and the media because the Jews own the media. pic.twitter.com/Cl88Dr4wSQ

McInnes brought up the millions of Jews killed in the Holocaust but West wasn’t convinced.

“But some of it’s incorrect. Also, the Holocaust is not the only Holocaust,” he said. “We have abortion right now. That’s eugenics. That’s genocide. That’s a Holocaust that we’re dealing with right now.”

West continued:  “So because Jewish people control the majority of the media along with banks, along with real estate, along with malls, they can control the narrative. History is written by the winners.”

Later in the interview, West told Jews to forgive Hitler.

“You can’t force your pain on everyone else,” he said. “Jewish people — forgive Hitler today. Let it go. Let it go. And stop trying to force it on other people.”

New Kanye interview just dropped. In this one he tells Jewish people to forgive Hitler. pic.twitter.com/sANcWwgFDF

As Breitbart News reported, Kanye West appeared last week on the Alex Jones Show where he praised Hitler and continued his attack on Jews. Elon Musk’s Twitter recently suspended West for posting an image of a swastika merged with the Star of David.