(JNS) A declaration of friendship and cooperation was signed in Israel this week at a festive ceremony between the mayor of Great Neck, New York, Dr. Pedram Bral, and Israel Ganz, the head of the Binyamin Regional Council, north of Jerusalem.

A similar signing kicked off the relationship between the two communities in the village of Great Neck, on New York’s Long Island, in August.

The latest declaration calls for the parties to “strengthen the friendly and cooperative relations between the two municipalities…on the basis of mutual respect, equality and mutual benefit.” The two communities also declared themselves as “Sister Cities.”

The collaboration between communities thousands of miles away was the brainchild of the Heartland Initiative, an organization based in Israel whose mission is to: “Build bridges and relationships through public diplomacy on a grassroots level between international mayors, philanthropists, business people, and other professionals to their counterparts within all the regions of Israel.” 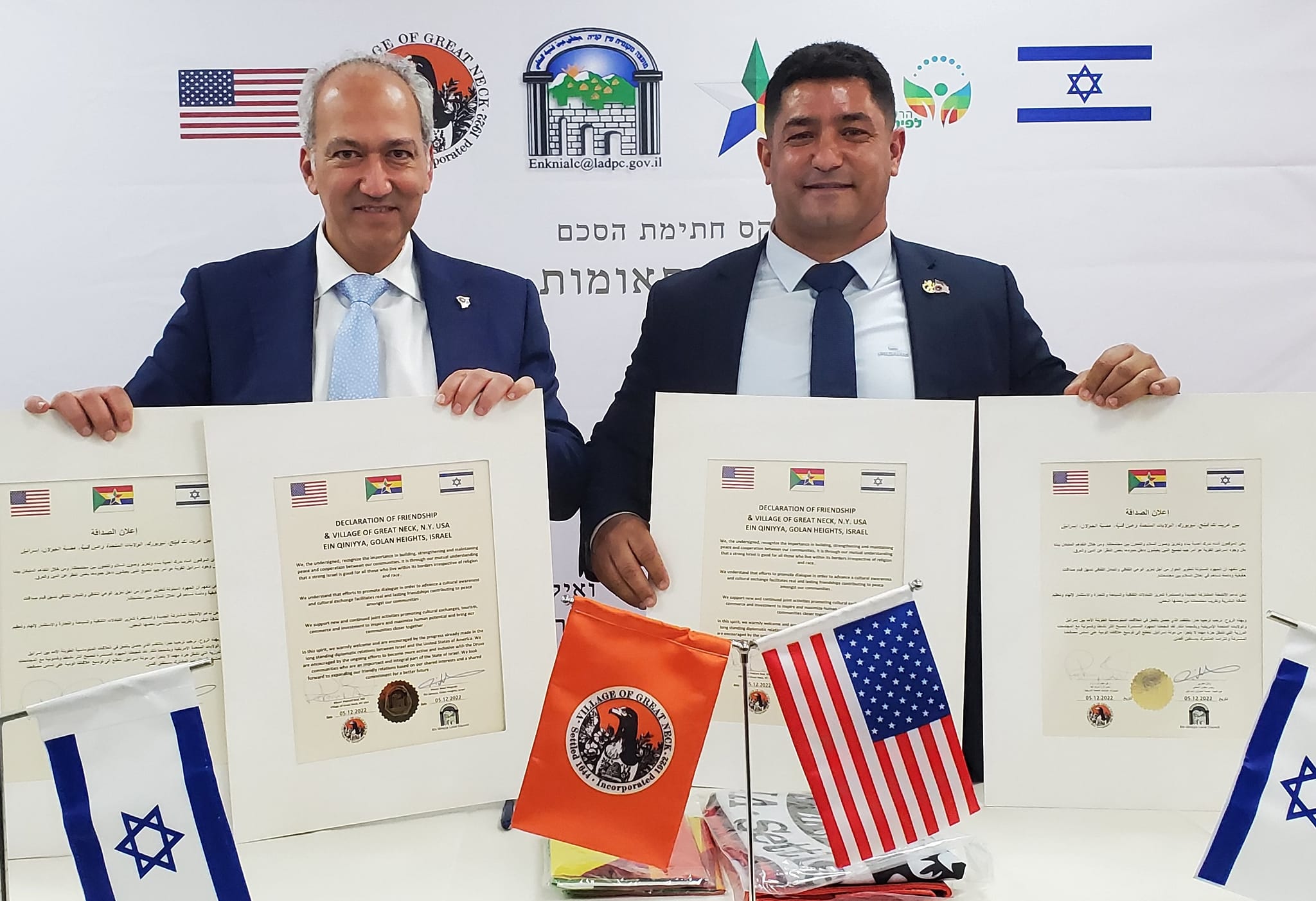 A day earlier, Bral was on the Golan Heights and signed a similar agreement of collaboration with Mayor Wael Mugrabi of the Druze village of Ein Qiniyye, located in the foothills of Mount Hermon. One document was signed in English and another in Arabic. Numerous members of Knesset representing multiple parties attended the ceremony.

Gedaliah Blum, co-founder and senior partner at the Heartland Initiative and founder of the Bikurim non-profit, told JNS, “Signing friendship declarations between cities is a way for grassroots leaders to bring together their communities for future cooperation.

“It’s not just a photo-op, it’s followed up by various programming, whether through education, cultural exchange, economic exchange, trade, etc,” he stressed.

Blum, who operates Heartland alongside co-founder and senior partner Yonathan Ben Yisrael, stressed that while his organization is based in Judea and Samaria, its goal is to build bridges between all parts of Israel with their counterparts abroad.

“The Heartland Initiative’s call to action is to strengthen Israel without any borders, all of Israel, whether it’s Herzliya or Shiloh, whether it’s Metula or Ein Qiniyye or Eilat.”

Bral told JNS: “The Binyamin area has been an integral part of Israel for millennia. The history of the area is undisputed, and we know this from archaeological findings. I find that in a Jewish state the connection to Binyamin is extremely important, and I believe many Americans feel the same way.”

At the same time, he continued, “I do believe the people of Great Neck support this initiative in partnering with the Druze community of Israel. They have played a significant role in Israel’s history in every way.”

Mugrabi told JNS, “It is important for us to learn about different cultures and raise awareness about them locally. We believe in peace regardless of a person’s race, ethnicity, gender or religious beliefs.

“I hope that this will be the start of a wonderful collaboration in which delegations travel back and forth from our village to Great Neck and vice versa, to learn from each other in the fields of education, tourism, sports, culture and more. I believe there is a lot we can gain from this relationship,” the mayor said.

Ganz added in a statement, “The Binyamin region is the center of the State of Israel, and our history’s roots are here. I am grateful to host the signing of this important declaration alongside the employees of our regional council. Becoming sister cities with Great Neck will strengthen our identity within the Diaspora, as the nucleus of the Jewish People in terms of industry growth and opportunities within Judea and Samaria.”

Blum explained that the Heartland Initiative isn’t limited to connecting communities in North America to Israel but has started to establish grassroots ties between Israeli towns and communities across the globe.

“We facilitate public diplomacy and bring delegations to Israel from all around the world to all parts of Israel,” he said.

Blum listed upcoming visits from the leadership of cities in various countries, but due to the sensitivities of those visits, the specifics are not yet free for publication.

“These leaders want to come to Israel in the realm of public diplomacy, but they have other topics on their minds such as collaboration in many fields including energy, security and more. We are blessed to be the facilitators of these relationships and future collaborations, which strengthen the State of Israel and promote the beauty and ingenuity of Israel abroad,” he said.