As promised, Elon Musk released internal communications documenting Twitter’s suppression of the New York Post’s blockbuster stories before the 2020 election presenting evidence from a laptop abandoned by Hunter Biden that the Democratic Party’s presidential candidate was covering up his family’s sale of access to the White House to the likes of Chinese Communist Party companies, and Russian and Ukrainian oligarchs.

The internal communications between Twitter officials show the Biden White House had a direct line to the social media giant to remove information it didn’t like.

Taibbi posted a screen shot of a message between Twitter employees showing that by 2020, requests to delete tweets from “connected actors” – people with an interest in the censorship – were routine.

One executive wrote to another, presenting a list of tweets to delete: “More to review from the Biden team.”

The reply came back, “Handled.”

7. Slowly, over time, Twitter staff and executives began to find more and more uses for these tools. Outsiders began petitioning the company to manipulate speech as well: first a little, then more often, then constantly.

Here are other significant revelations:

In a column Saturday for the New York Post, Miranda Devine – who spearheaded the October 2020 Hunter Biden laptop stories and later authored “The Laptop from Hell” – wrote that Musk “half-delivered” on his promise to tell all about Twitter’s censorship.

“What was missing were details of specific warnings we know the FBI made to Twitter about a Russian ‘hack and leak operation’ involving Hunter during their weekly meetings with top executives of the social media giant in the days and weeks before The Post published its exclusive bombshell,” she wrote.

Devine pointed to the testimony Tuesday of FBI Supervisory Special Agent Elvis Chan in a lawsuit against the Biden administration brought by Republican attorneys.

Chan said he organized weekly meetings with Twitter and Facebook in San Francisco for as many as seven Washington-based FBI agents in the run-up to the 2020 presidential election. 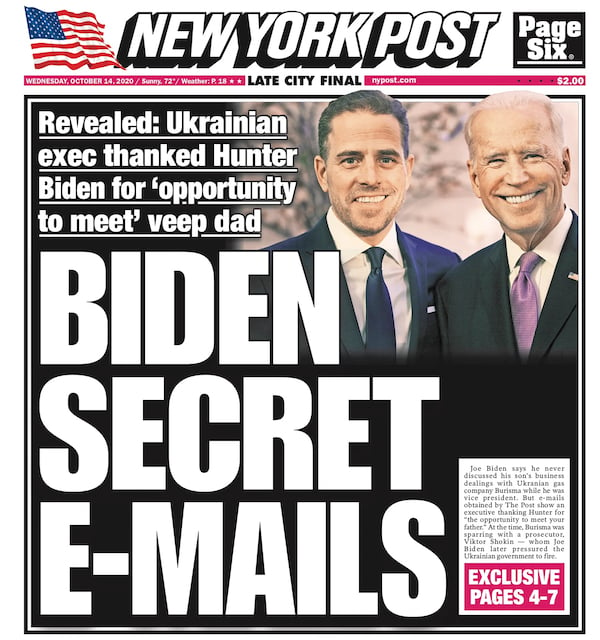 Yoel Roth, who then was Twitter’s head of site integrity, said in a sworn declaration he was told during the meetings to expect “hack-and-leak operations” by state actors involving Hunter Biden.

It was Twitter’s policy of banning “hacked materials” that was cited Oct. 14, 2020, when it locked the Post’s account for two weeks and censored the revelations that Joe Biden was lying about his knowledge of the family influence-peddling business.

In a recent in-depth video interview with WND, Seamus Bruner, who along with Peter Schweizer uncovered evidence of the Biden family’s business long before the New York Post stories, breaks down the evidence as House Republicans prepare to investigate.

See a montage created by “War Room” showing the claim by media, Joe Biden and others that the Hunter Biden laptop was part of a Russian disinformation ploy:

Woods, informing Carlson he plans to sue the DNC, had a message for “Joe Biden, and all those rats who worked with you and the DNC.”

“I am not afraid of you, and I am coming for you.”

‘Battle for the future of civilization’
Earlier this week, amid Musk’s measures to protect free speech on Twitter, including the elimination of its COVID “misinformation policy,” the White House promised to keep “a close eye” on the social media platform.

The new Twitter owner made it clear he believes the stakes are high.

“This is a battle for the future of civilization. If free speech is lost even in America, tyranny is all that lies ahead,” he tweeted Monday.

“Again, we’re all keeping a close eye on this, we’re all monitoring what’s currently occurring, and we see, we see it with our own eyes what you all are reporting, and just for ourselves, what’s happening on Twitter.”

During the pandemic, many censored or suppressed tweets, labeled “misinformation,” expressed viewpoints that are now acknowledged to be true or legitimate arguments, such as the ineffectiveness of masks, lockdowns and vaccines, and the theory that SARS-CoV-2 originated in a lab in Wuhan, China.