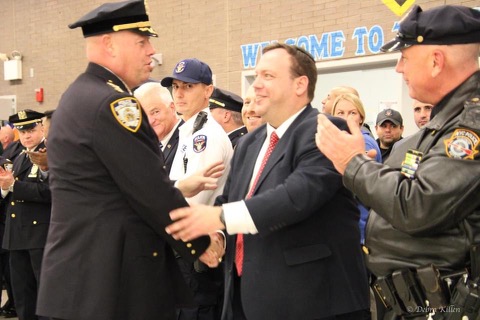 Chief Kenneth Corey, the first Staten Islander in recent memory to be named chief of department of the NYPD, was honored on November 29, with a final sendoff at Pct. 121, the Home of Patrol Borough Staten Island located in the Graniteville section in Staten Island on his last day on the job. Mendy Mirocznik, president, Council of Jewish Organizations of Staten Island (COJO) and Ari Weiss, COJO security chairman and coordinator Staten Island Shomrim represented COJO at the Sendoff.

Corey, 53, of Prince’s Bay, held the third-highest-ranking position on the force, behind the commissioner and first deputy commissioner.

Originally from Brooklyn, Corey has been living on Staten Island for more than 25 years. For the 3 years prior to becoming Chief of Department he served  as the Staten Island Borough Commander, which was perhaps the most challenging period to serve on the police force. This period of time is historical it coincided with the height of the coronavirus pandemic and the social upheaval and its aftermath following the murder of George Floyd in Minneapolis.

At the walkout, hundreds of police officers gathered outside the building to welcome Corey and his family. Afterwards, Corey could be seen riding off in a vintage police car.

“From day one, I have seen Chief Corey conduct himself with unparalleled integrity and I have marveled at his strength and vision,” said Police Commissioner Keechant L. Sewell previously in a statement. “Chief Corey has been a beacon of excellence for officers in every rank – at every station. The light of his leadership will remain a shining guide forward for all of us and his contributions to our profession will be everlasting.”

Over the course of his career, he led patrol boroughs including in Brooklyn, Manhattan, the Gang Squad Manhattan South, and the District Attorney Squad Queens. Prior to his promotion to chief of department, Corey was the chief of training for the NYPD, and was instrumental in the training of new police officers.

In the years Corey served Staten Island, the borough saw a decrease in several major crimes.

Over a two-year span, prior to his departure, robberies decreased by 29%, burglaries by 11% and rapes by 35%, according to NYPD figures. Corey often highlighted the importance of collaboration between the community and the NYPD. During a police reform and reinvention collaborative listening session the NYPD held on Staten Island in 2020, he addressed a spike in homicides in the borough, saying “the speed at which we solve cases sometimes is directly related to the amount of support we get from the community.’’

In 2020, Corey was forced to navigate dueling crises in the form of the coronavirus (COVID-19) pandemic — when crimes like shootings and homicides rose not only on Staten Island, but throughout New York City — and civil-rights protests.

In particular, Corey was hailed for his efforts building the bridge between police and the Black community during Black Lives Matter demonstrations. While most other boroughs saw violence during a summer of simmering racial tension, rallies on Staten Island remained peaceful.

Mendy Mirocznik, remarked, “on behalf of the Council of Jewish Organizations of Staten Island, I congratulate Staten Island’s very own Chief Kenneth Corey, Chief of Department on his retirement. Chief we want you to know that you are a good man and an officers officer. Your tremendous service has made a positive impact on the City of New York. You have skillfully helped us navigate through the pandemic and beyond. Your leadership is the impetus that helped us achieve great resilience as we turn the chapter to a better tomorrow and bright future. G-d Bless you and your family as you embark on the next chapter of your life.

At COJO we will always appreciate your support and value and cherish our friendship. Your positive imprint on this world has made an indelible impression and you truly have made it a better place for all people. Your signature line “So let’s work together and find a solution” defines your strong positive upbeat and optimistic character which is full of energy, perseverance, dedication and devotion in working at all costs and expanding all resources in finding real solution to the challenges we as a city face. Your ability to have strong open lines of communication and for conducting open, public and frank dialogues with the entire Staten Island community is the secrete of your great police style that truly established confidence, community trust and a powerful support system that continues to grow and bring diverse people to the table with the goal of enhancing public safety for all people. It is an honor to call a friend.”