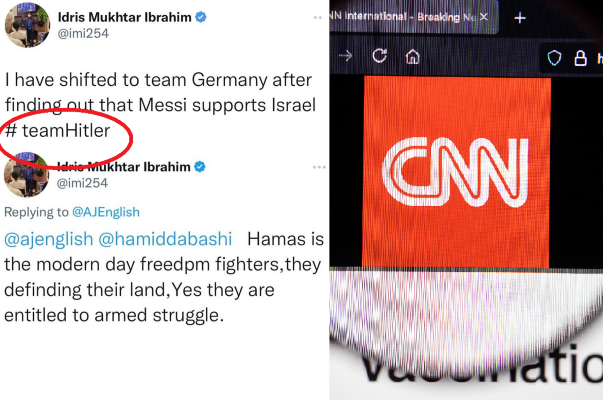 By United with Israel Staff

Since 2015, CNN has worked with a Kenyan producer named Idris Muktar Ibrahim, who contributes reporting to the network’s international desk about Africa .

Despite receiving a degree from the University of California Berkeley’s Graduate School of Journalism, Ibrahim has espoused some decidedly unenlightened views on Twitter, some of which are extremely disturbing. This week, media watchdog HonestReporting exposed Ibrahim’s troubling statements and questioned why CNN would permit an individual with such views to contribute to its reports.

According to tweets collected by HonestReporting, Ibrahim posted the hashtag “Team Hitler” in a post about a soccer match between Israel and Germany.

He also championed the U.S.-designated Palestinian terror group Hamas, referring to its members as “modern day freedpm fighters [sic]” who are “definding [sic] their land.”

HonestReporting noted that “just hours after Ibrahim posted” this tweet, “a Hamas rocket struck a kindergarten in the southern Israeli town of Gan Yavneh.”

With views such as these, its shocking that CNN would permit Ibrahim to report on Israel, which the network did in November 13 story titled “Israeli President invites Netanyahu to form government.”

According to HonestReporting, “Ibrahim is, of course, entitled to his personal views, even if they are ignorant and offensive. But as we previously explained, producers with a political agenda can be selective with the information they present to the public, resulting in lopsided media coverage of the conflict in the Middle East.”

After HonestReporting reached out to CNN for comment, a network spokesperson claimed they were “looking into the matter.”

Irbahim is only one of multiple antisemitic, anti-Israel journalists identified by HonestReporting, four of whom were cut loose by outlets during the last three months after the watchdog exposed their bias.