Families of the Iranian national soccer team have been threatened with imprisonment and torture for any “misbehavior” leading up to their World Cup match against the United States on Tuesday.

The U.S. Men’s National Team (USMNT) is set to take on Iran in a crucial World Cup game at 2 PM EST on Tuesday. A game that the United States needs to win to survive and advance in the 2022 World Cup in Qatar.

The game is crucial for Iran as well. However, of more concern to the government of the Islamic Republic are the protests that have raged across their country since the death of 22-year-old Mahsa Amini (also known as Jina Amini). Amini reportedly died in police custody after being arrested for refusing to wear her hijab.

The Iranian team has been both outspoken and silent in their support of the protests. Before their World Cup matchup against England, the players refused to sing their national anthem in solidarity with the protesters.

Team captain Ehsan Hajsafi voiced the players’ discontent with the lack of rights for women in their home country after their 6-2 loss to England.

“Conditions in our country are not right, and our people are not happy,” Hajsafi told reporters. Hajsafi further said that the victims’ families “should know that we are with them, we support them and we sympathize with them.”

On Monday, CNN reported that families of the Iranian team have been threatened with imprisonment and torture if players fail to “behave” accordingly before the game.

CNN cited a person who handles security for the World Cup games as the source of the information.

“The source said that they were told that their families would face ‘violence and torture’ if they did not sing the national anthem or if they joined any political protest against the Tehran regime,” CNN reported.

“There are a large number of Iranian security officers in Qatar collecting information and monitoring the players,” the source added.

In addition, the source claims Iranian players met with members of the Iranian Revolutionary Guard Corps (IRGC) following their refusal to sing the anthem in the game against England.

On Sunday, Iran’s state media called for the U.S. to be kicked out of the World Cup following a tweet by the USMNT which showed the Islamic Republic symbol in the center of the Iranian flag removed. 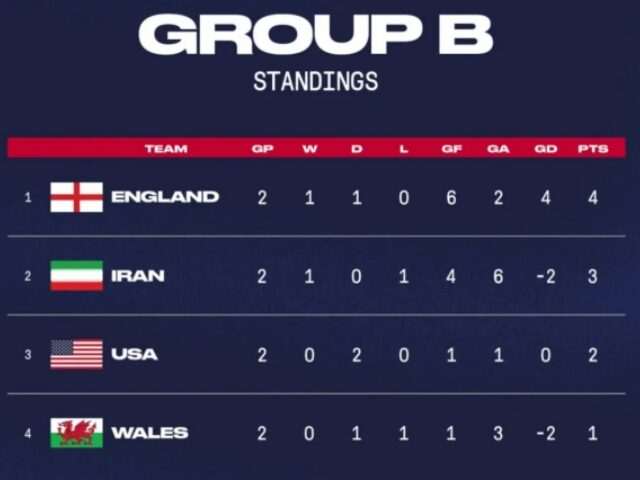 “According to section 13 of #FIFA rules, any person who offends the dignity or integrity of a country, a person or group of people… shall be sanctioned with a suspension lasting at least ten matches or a specific period, or any other appropriate disciplinary measure,” Iran’s state-affiliated media Tasnim News Agency wrote on Twitter.

The agency added, “By posting a distorted image of the flag of the Islamic Republic of #Iran on its official account, the #US football team breached the @FIFAcom charter, for which a 10-game suspension is the appropriate penalty. Team #USA should be kicked out of the #WorldCup2022.”

US Soccer claims the symbol was removed from the flag to show “support for the women in Iran fighting for basic human rights.” However, US Soccer did add the symbol back to the flag 24 hours later.

The US was not removed from the tournament. (Breitbart)