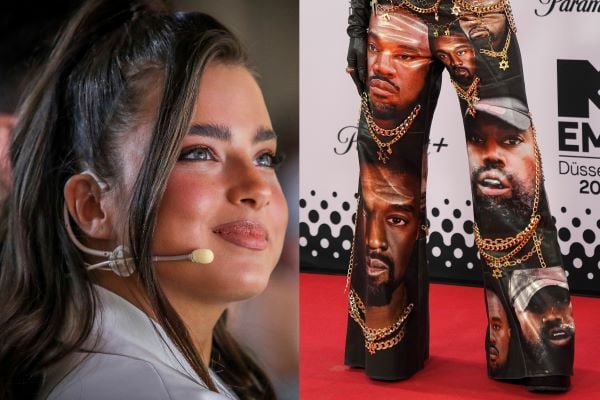 By United with Israel Staff

Kirel, who took home the award for best Israeli artist for the fifth year in a row on Sunday, wore pants with images of West wearing the Star of David, a key symbol for the Jewish people and the State of Israel.

West has made multiple antisemitic statements on high-profile platforms, in addition to claiming he is one of the “real” Jews, which parrots the hate-filled anti-Jewish fantasies of the Black Hebrew Israelite sect.

That sect made the news recently when NBA star Kyrie Irving promoted a film spreading its conspiracies, a film that included Holocaust denial and the false claim that the Jewish community is currently made up of imposters and not “real” Jews.

Kirel wore the pants a day after one of the world’s top comedians, Dave Chappelle, delivered a monologue on NBC’s “Saturday Night Live” that mocked statements condemning antisemitism, amplified stereotypes about Jews, and legitimized people like West and Irving.

Chappelle has faced accusations of antisemitism in the past when he appeared to accuse current-day Israelis of treating the Palestinians like the Nazis treated the Jews during the Holocaust, a common, false antisemitic trope used by anti-Israel activists.

According to Kirel’s stylist, Itai Bezaleli, the singer wore the pants because she wanted to address “something topical that will be talked about.”

Kirel rose to fame as a teenager in Israel before serving in the IDF and scoring several hits. Next year, she will be represent in the Eurovision song contest.