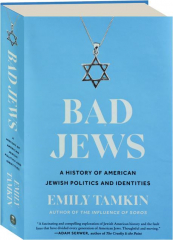 Beyoncé wins 2 Grammys in Pre-Show, Where to Watch Awards Show

“I’m a bad Jew” is a common admission among American Jews, sometimes sheepish, sometimes boastful, and typically containing a dose of truth. But in her new book, Bad Jews, journalist Emily Tamkin sets out to prove that the subject of her title is a myth. “It is my best attempt,” she writes, “to wrestle with what I believe to be the one truth of American Jewish identity: It can never be pinned down.” The result is alternately perverse and insipid beyond belief. Let me show you what she means.

“The story of Ethel Rosenberg is, in many ways, a Jewish story,” writes Tamkin, after an uneven sketch of the 1950s spy case. “Who, in this, is the Good Jew or the Bad Jew? Is it the Communist Jewish woman who was executed? The Jews who stood by her? Or the Jews who called for her death? The sons, years later trying to push for the exoneration of their mother? Or Roy Cohn, the Jewish man who helped create the environment that killed her?”

Like most questions in the book, these are left unanswered, presumably because Tamkin thinks they are unanswerable. But the answers are blindingly obvious.

Ethel Rosenberg was a bad Jew. We know from Soviet cables and KGB memos that she urged and aided in the recruitment of her relatives as nuclear spies. She betrayed her country, the United States, the best home in exile the Jews have ever known, to arm Joseph Stalin, a demon responsible for the murder of millions and an anti-Semite who tried to stamp out Jewish religion. Ethel was “totally uncritical” in her devotion to communism, a totalitarian ideology that crushes the human spirit and seeks the dissolution of all Jewish identity. Right until the last moment, Ethel had an opportunity to save her life and spare her children from becoming orphans. All she had to do was tell the truth. Instead, she continued to lie, choosing loyalty to Stalin over duty to her children.

The Jews who stood by Ethel were duped or were themselves fellow travelers. The major Jewish organizations that Tamkin scolds, along with the bulk of American Jewry, for supporting the prosecution, saw more clearly than she does. Historian Lucy Dawidowicz, singled out for her support of the Rosenbergs’ execution, devoted her career to the study of the Nazi War Against the Jews and the Jewish tradition that the Nazis sought to destroy. Her work helped preserve that tradition for Jews today. Finally, Roy Cohn didn’t help “create the environment that killed [Ethel],” because Ethel wasn’t killed by an environment.

When she wants to be, Tamkin is rigidly opposed to judgments of any sort. She denies even the possibility of something being “good for the Jews,” or bad. Her reason is that Jews differ—as if this, too, is an unanswerable objection.

Leave normative terms aside; Tamkin is just as obtuse regarding descriptive assessments. At times, she seems impervious to sociology. For example, she takes great issue with Nathan Glazer’s comment that the period of immigrant Jewish life on New York’s Lower East Side was “when the [American] Jews were thus most Jewish.” She protests, “But what did ‘true Jews’ or ‘most Jewish’ actually mean? What made one Jewish life more or less authentic than another?”

Behind these questions is the dogmatic insistence, crucial to Tamkin’s liberal Judaism, that no one is any more Jewish than anyone else. Fine. Some people, however, have a thicker identity than others. Some Irish-Americans have a deep connection to Ireland and some simply drink Guinness on St. Paddy’s Day. Jews who, say, spoke a Jewish language in daily life and had real knowledge of Jewish tradition had a thicker Jewish identity than most American Jews have had since.

Tamkin can’t admit this because, as she writes, she is deeply anxious about her own Jewishness. Though Bad Jews is “a roughly hundred-year history of Jewish American politics, culture, identities, and arguments,” in keeping with the modern fad it is also a personal exploration. Tamkin shoehorns the issue of intermarriage into several chapters, often discussing her own marriage, which is to a non-Jew who didn’t subsequently convert.

Tamkin objects to “the insistence that intermarried Jews are less serious about Judaism and somehow not fully capable of passing  Jewish values on to their children.” She even has an imaginary conversation with a leading Jewish philanthropist on the issue. It ends with the conclusion that he wouldn’t care at all about her “hypothetical future children” on account of their non-Jewish father, making clear that she fails utterly to understand the opposing point of view.

No doubt Tamkin will instill Jewish identity in her children; she writes books on the topic. But in general, one Jewish parent and one Christian parent aren’t as likely as two Jewish parents to raise children who identify strongly as Jews. This is common sense, and the data are clear that children of intermarriage feel that Judaism is less important to them (as it was for their parents) and act accordingly.

Tamkin’s personal leanings often make her an unreliable narrator. She tries to sanitize the Second Intifada as “a Palestinian uprising that came from the failure of the peace process in the first decade of the 2000s and the violence that ensued,” a sentence worthy of Orwell’s “Politics and the English Language.” She describes Jewish Currents, which she admires, as “the magazine founded for the Jewish Left back in 1946,” leaving out that it was Stalinist. She congratulates Rep. Ilhan Omar (D., Minn.) for apologizing for an anti-Semitic remark, without mentioning that Omar quickly walked back the apology and reiterated her conspiracy theory.

Notably bad is Tamkin’s discussion of the neoconservatives. Hostile framings and poor paraphrases of Irving Kristol arguments are one thing. Another is that she doesn’t seem to know what she’s talking about. The first words she uses to describe neocon intellectuals are “free-market capitalists”; in fact, they were notable within the conservative movement for accepting limits on the free market and making peace with the New Deal, while critiquing excesses of the Great Society on empirical grounds. Next, she writes, “Neoconservatives actually started out as leftist radicals. They were disciples of Leon Trotsky.” For most neocons, this is false. Norman Podhoretz, for instance, was never a Trotskyist. Some, like Kristol, had been Trots in college, but their Marxist credentials were far inferior to, say, those of many founding editors and writers of the conservative (no “neo”) National Review.

The problem can be traced to the book’s citations. Tamkin’s pattern is to rely on a single secondary source for information, citing it several times consecutively to cover a topic, before moving on to another single source, also cited several times in a row, for a new topic. In her neocons chapter, she cites Benjamin Balint’s book on Commentary 16 times in a row. I’ve read the book and it is serviceable, but it is only one view on a topic on which countless words have been written. Commentary’s archives are also available online. To rely so thoroughly on single sources is indicative of laziness, frankly, and lack of knowledge.

Tamkin claims to argue that there’s no such thing as a good Jew or bad Jew. But her heart isn’t in it. At every opportunity, she valorizes her bad Jews, the ones who vilify Israel and the American Jewish community. They’re the heroes. Eli Valley, the Jewish cartoonist known for drawing Israelis and pro-Israel Americans as Nazis, she fawns over. Her comment that “multiple people, on learning that I was writing this book, told me that I had to speak to Valley. His work meant so much to them, they told me. It had helped them figure out their own relationship to Jewishness” is perhaps more revealing than she intended.

The flip side is that Tamkin clearly thinks her good Jews are bad. The major Jewish organizations are portrayed throughout as morally indefensible; even Jewish leadership in the civil-rights movement is unconvincingly labeled a “myth.” Anticommunists and Israel supporters are cast as fear- and guilt-ridden tyrants, synogogue-goers as conformist and xenophobic. In her most disgusting passage, Tamkin blames the deadly 2018 shooting at Pittsburgh’s Tree of Life synagogue on Donald Trump and then immediately uses the tragedy to dump on Orthodox Jews—themselves the victims of most anti-Semitic violence—for several paragraphs.

At the end, Tamkin has one last somersault to perform: excusing left-wing anti-Semitism. “When I hear that the fixation should be on antisemitism on the left,” she writes, “I recall that there was a reason that American Jewish professionals in the 1960s decided not to focus on the antisemitism within the Nation of Islam,” namely, that it could detract from the broader progressive struggle. She then has a quote that the response to left-wing anti-Semitism should be “to show up more” to left-wing causes. Sen. Bernie Sanders (I., Vt.), it is made clear, is the ideal type. At last, and in so many words, we have Tamkin’s elusive definition of a good Jew: a leftist.

Elliot Kaufman is the letters editor of the Wall Street Journal.