Israel’s Ambassador to Ukraine Michael Brodsky on Friday slammed the government of Ukrainian President Volodymyr Zelensky for backing a United Nations resolution urging the International Court of Justice (ICJ) to “urgently” arbitrate on the Israeli-Palestinian conflict on the side of the Palestinians, according to an i24News report. 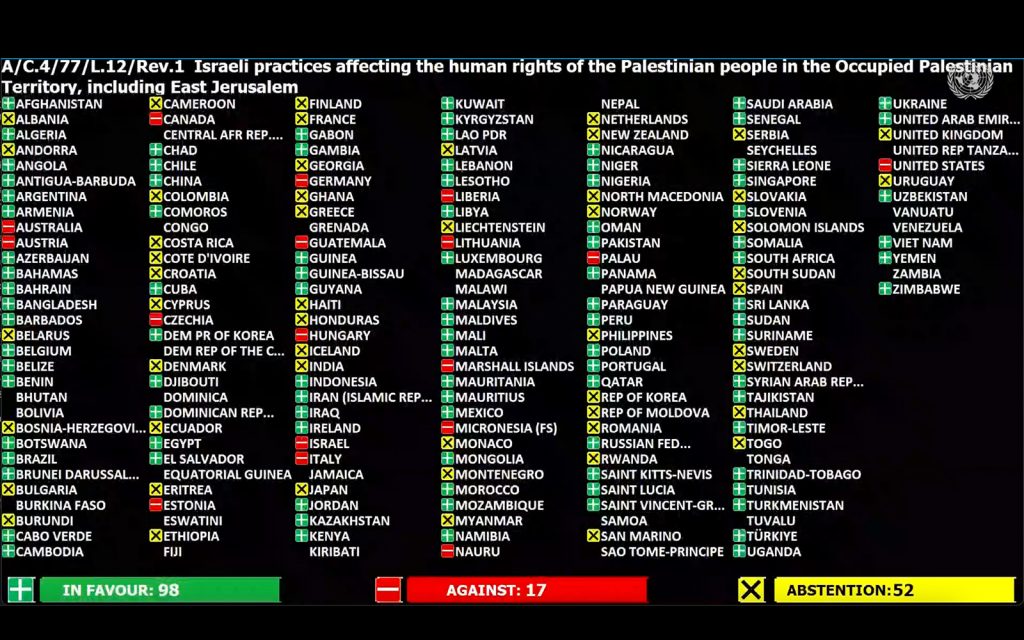 The resolution, titled “Israeli practices and settlement activities affecting the rights of the Palestinian people and other Arabs of the occupied territories,” requests that the Hague-based ICJ “render urgently an advisory opinion” on Israel’s “prolonged occupation, settlement and annexation of Palestinian territory,” and appears to ignore Jewish ties to the Temple Mount, the holiest site in Judaism, according to a Times of Israel report.

A full draft of the resolution can be seen here:  https://www.un.org/unispal/document/israeli-practices-affecting-human-rights-of-the-palestinian-people-request-for-icj-advisory-opinion-ga-draft-resolution-a-c-4-77-l-12-rev-1/

Brodsky tweeted that Ukraine’s “support of the UN resolution ‘Israeli Practices’, is extremely disappointing.  “Supporting anti-Israeli initiatives in the UN doesn’t help to build trust between [Israel] and [Ukraine],” said the ambassador, the Times of Israel reported.

i24 News reported that the motion, brought up at the request of the Palestinian Authority but officially submitted by Nicaragua, passed with 98 votes in favor—including Ukraine— 17 against, and 52 abstentions. It was vehemently opposed by Israel, which argued it would destroy any chance of reconciliation with the Palestinians. The committee, also called the Special Political and Decolonization panel, is one of six main committees of the UNGA, as was reported by The Times of Israel.

In addition to Ukraine voting in favor of the anti-Israel resolution other countries such as Bahrain, Egypt, Jordan, Russia, Saudi Arabia, the United Arab Emirates, Iran, Jordan, Afghanistan, Belize, Brazil, Sudan,  Qatar, Kuwait and Guinea also voted in favor of it, the TOI reported. Many more countries also voted yes on the resolution.

“By co-opting the court,” Israel’s UN Ambassador Gilad Erdan said, “the Palestinians are given the perfect excuse to continue boycotting the negotiating table to perpetuate the conflict,” as was reported by i24News.

Erdan also called the resolution  part of a “long line of anti-Israel resolutions,” the Times of Israel reported.

“The only purpose is to demonize Israel and exempt the Palestinians from responsibility,” Erdan said, adding that the resolution was “destroying any hope for a resolution.”

He also strongly critiqued the resolution for referring to Jerusalem’s Temple Mount only by its Arabic name, Haram al-Sharif. The resolution also refers to the Temple Mount as part of “Occupied Palestinian Territory, including East Jerusalem,” as was reported by TOI.

Erdan added that “freedom of worship is a value they refuse to uphold” and accused the UN of peddling in “destructive falsehoods that will only perpetuate the Israeli-Palestinian conflict.”

TOI also reported the Palestinian delegation to the UN said in response to the resolution, “Our people deserve freedom. Our people are entitled to freedom.”

The United States representative to the committee, Richard Mills, expressed “serious concerns” about the resolution, saying it would “magnify distrust” surrounding the conflict, according to the TOI report.

“There are no shortcuts to a two-state solution,” he said, adding that the Temple Mount phrasing was “intended to denigrate Israel,” Mills added.

The text asks the ICJ to consider that, due to its continuing nature, the “Israeli occupation” constitutes annexation. i24 News also reported that a court ruling affirming that Israel illegally annexed the territories known as Judea and Samaria as well as East Jerusalem would not be legally binding on the Jewish state, yet it would be a blow to Jerusalem.

The resolution will now head to the General Assembly plenary for official approval, likely next month, TOI reported.

It was one of several focused on the conflict during the session and called for an investigation into Israeli measures “aimed at altering the demographic composition, character and status of the Holy City of Jerusalem” and says Israel has adopted “discriminatory legislation and measures,” as was reported by TOI.

The ICJ, also known as the world court, is one of the UN’s main organs and is charged with settling disputes between countries, i24News reported. Its opinions are not binding.