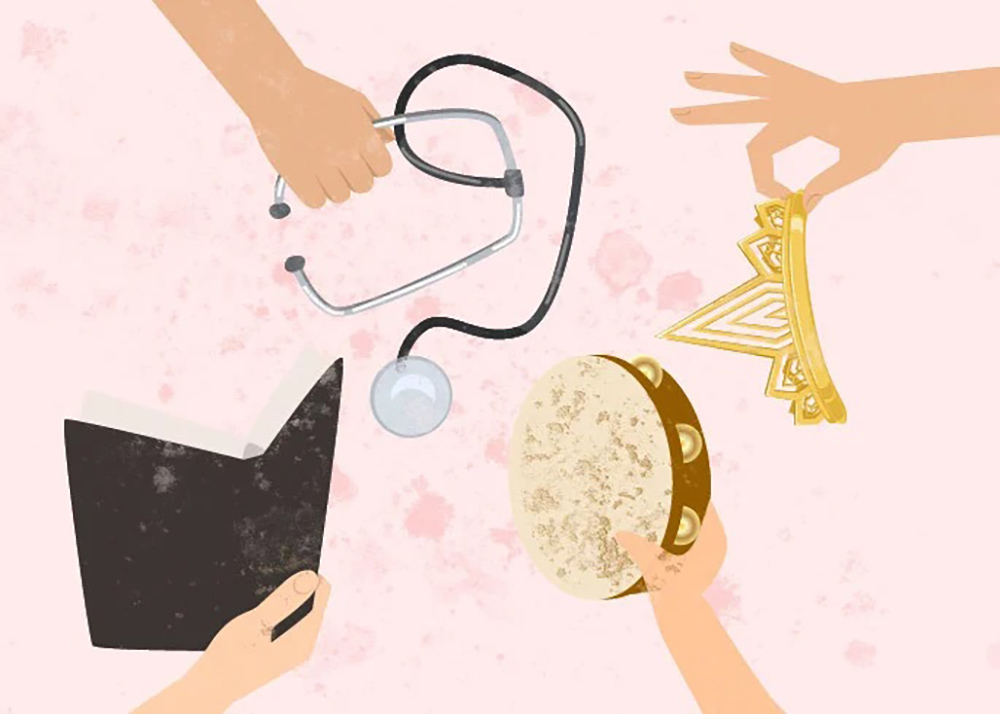 12 Hanukkah Facts Every Jew Should Know

Miriam was born in the depth of the Egyptian exile, when the people were overworked, demoralized, and hopeless. Her father, Amram, the “great one of the generation,” was so devastated by the situation that he divorced his wife, saying that “Israel is birthing for naught!” Many followed his example. Young Miriam saw this and bravely admonished, “Father, you are worse than Pharaoh! Pharaoh only decreed against baby boys, but you are also decreeing against the girls!1” Amram conceded and remarried her mother.

When Pharaoh decreed that all Jewish boys be killed, Miriam, who assisted her mother as a midwife, stood up to the powerful king and refused to do his bidding.

When her brother Moses—who was destined to become the greatest and most famous Jewish leader—was born, he had to be hidden. He was placed in a basket on the Nile and Miriam faithfully watched from a distance. When Batya, Pharaoh’s daughter, saw the boy and attempted—unsuccessfully—to feed him, Miriam—in her ingenuity and courage—offered a brilliant solution. She suggested that he be fed by a Hebrew wet-nurse, and when Batya agreed, she led her to her mother.

Forty years after the Exodus, the Jewish people were ready to conquer Israel. In the city of Jericho, the “key to the land,” lived a woman—Rachav—who owned and operated an inn.

When two Jewish spies arrived to check out the city, chased by the king of Jericho’s soldiers, Rachav hid them in her attic2 and misled the searchers, enabling them to escape unharmed. In gratitude, the spies promised her that when the time came for them to conquer Jericho, they would spare her. She should tie a red string from her window, they instructed, which would signal that the house and its inhabitants were not to be harmed.

The Midrash tells that Rachav converted to Judaism and married Yehoshua, the leader of the Jewish people.

During the period when the Judges ruled Israel, Ruth, a Moabite princess, married the son of a rich Jewish merchant who had immigrated to Moab. After her husband died, her mother-in-law, Naomi, urged Ruth to return to her family and move on.

Ruth demurred, saying, “Wherever you go, I will go; and wherever you lodge, I will lodge. Your people shall be my people, and your G‑d, my G‑d.”3 Ever faithful, she joined her mother-in-law on the journey to the Land of Israel, where she knew no one and would have nothing.

In Israel, Ruth collected the produce left behind for paupers in the fields of her late husband’s wealthy relative, Boaz. When Boaz observed Ruth’s modesty, he asked for her hand in marriage. Ruth was well rewarded for her bravery; through her union with Boaz, she became the paternal great-grandmother of King David.

As told in the Book of Judges, the brave prophetess Deborah guided the Jewish army to victory over their Canaanite enemies. Sisera, the defeated general, managed to escape to the tent of Heber the Kenite.

There, Yael, Heber’s wife, welcomed him into her home, and at his request for water, gave him milk. When the milk had lulled the exhausted general into a soothing sleep, Yael quickly drove a peg from the tent into his head. When Barak, the Jewish general, came in pursuit of Sisera, Yael called to him, “Come and I will show you the man whom you seek,”4 revealing the dead body.

In the period between the first and second Temples, when many Jews were exiled to the Persian empire, Esther, an orphan, was adopted by her cousin Mordechai, leader of the Jewish community. Esther, exotically beautiful, was chosen to become King Ahasuerus’ queen. She was thrust into the role of courageous savior when Haman plotted to end Jewish life in Persia. Acting selflessly and risking her own life, Esther revealed Haman’s true colors and managed to thwart his plan.

The holiday of Purim is celebrated every year, commemorating G‑d’s miraculous salvation, brought about by Esther’s bravery and faith.

According to some, this story took place during the time of the Maccabean revolt. The cruel Syrian-Greek general Helofornes set out to crush the Jewish rebellion in Bethulia by cutting off their food and water supply, starving them into submission.

Unwilling to stand idly by, Judith, daughter of the High Priest, crossed into the enemy camp armed with bread, cheese, and aged wine. She promised Helofornes that she would help him gain control of the town, thus winning his trust.

After Helofornes wolfed down the delicious fare, he fell into a drunken slumber and Yehudit snatched her moment of opportunity. With a prayer on her lips, she reached for his sword and ended his life. She then carried the general’s head wrapped in rags to show the Jewish commander.

When the horrified Greek-Syrian soldiers came across the body, they fled, making way for the Jewish triumph.

Queen Salome, in Hebrew Shlomtzion, lived from 139-67 B.C.E. Her husband, King Alexander Yanai, wreaked havoc among the Jews living in Israel. When he died, the throne was bequeathed to her, and she became one of only two women to ever rule in Judea.

Salome made Jerusalem her seat and restored good ties with the rabbis—many of whom her late husband had murdered in cold blood, releasing those he had arrested.

During her reign, Salome strengthened the cities in Judea and expanded the army, avoiding the invasions to which everyone else in the region fell victim.

She ruled for nine blessed years and brought security and glory to Israel.

The wealthy Kalba Savua (a patron of Jerusalem in the final years of the Second Holy Temple) envisioned a son-in-law who would be learned and well-versed in all areas of Torah. He was shocked when his daughter Rachel chose to marry Akiva, a simple shepherd in whom she saw potential. Destitute and living in a dilapidated shack, Rachel held steadfast to the belief that her husband, who had never learned Torah, would devote his life to its study.

She stayed home while he traveled to a yeshivah at the age of 40. Being mocked by her neighbors did nothing to dampen her spirit, and she remained confident he would succeed.

Akiva returned 24 years later with the title “Rabbi” attached to his name, and declared in front of his thousands of students, “All the Torah that you and I have acquired is hers [Rachel’s].”