Entire Gender Industry Is Based On A Failed Study That Disproved Scientist’s Theory: Psychiatrist - The Jewish Voice

Entire Gender Industry Is Based On A Failed Study That Disproved Scientist’s Theory: Psychiatrist

America’s ERs Are Jammed, Affecting Patients on Other Wards

Authored by Jan Jekielek and Masooma Haq via The Epoch Times,

With schools teaching sex and gender ideology beginning in kindergarten, the Biden administration encouraging early medical treatments for gender dysphoria, and social media influencers discussing the topic, a record number of adolescent girls believe they are transgender and are transitioning to live as males.

Concerned adults are sounding the alarm on the lack of scientific studies to support transgender medical treatments that permanently alter a young person’s physiology and leave their mental health issues unresolved.

Child and adolescent psychiatrist Miriam Grossman, who has been a mental health professional for 40 years, said the gender industry is built on the lies of one troubled psychologist.

“The person who came up with the theory was Dr. John Money, and he came up with this idea that a person’s biology—their body, their chromosomes—is completely separate from their feeling of whether they are male or female,” Grossman said during a Sept. 23 interview for EpochTV’s “American Thought Leaders” program.

Grossman said the industry surrounding gender ideology—from gender clinics and hospitals to transgender pride flags and the emergence of a transgender civil rights movement—is based on a concept that was never proven to be true.

“In fact, the opposite was proven,” she said. “This whole concept of having an identity as male or female being completely separate from your biology has actually been proven incorrect by John Money’s experiment.”

Money was instrumental in establishing the first clinic to perform gender reassignment surgeries on children and adults at the Johns Hopkins Gender Identity Clinic.

In the 1960s, Money set out to prove his theory of gender identity to the world, and the perfect case study showed up in his office, Grossman said. But instead, his theory was disproven, and it was later revealed that his gender theory came from a study that was seriously corrupted.

Grossman told the story of Janet and Ron Reimer, a Canadian couple with twin boys who consulted Money in the mid-1960s after one of the twins, Bruce, suffered a botched circumcision as an 8-month-old that permanently disfigured his genitals.

After seeing Money speak on a TV program about his research, the parents thought their grievously injured son could—like Money was promoting—change the sex he was born with and live a happy life as a girl.

Money’s hypothesis was that humans are born with a blank slate in terms of gender.

“He told the parents that they must immediately change Bruce’s name to a girl’s name, put him in girl’s clothing, tell everybody that he’s a girl, and never, ever tell him the truth about his birth and what happened to him,” Grossman explained.

Money advised the parents to have Bruce castrated and for doctors to construct an elementary female genitalia for the boy, Grossman said. Bruce was renamed Brenda and raised as a girl.

However, after many years of being treated by Money, at about the age of 10 the twins refused to see him again. It was later revealed that Money sexually abused the twins during their appointments. Bruce was reportedly never happy as a girl and had masculine inclinations that disturbed him throughout his life.

When the parents finally revealed the truth to the twins as they were entering puberty, Bruce (who was living as Brenda at that time) chose to revert to living as a male and took the name David.

“We have to acknowledge the unbelievable arrogance of a professional high-standing academic—widely respected, accomplished—the arrogance that he had to exploit this family in order to hold them up as proof of his theory,” said Grossman.

Money received a slew of awards during his treatment of the twins, including 25 years of continuous funding from the National Institutes of Health, Grossman said.

“His ideas about gender were institutionalized, were immediately adopted within an entire field of medicine—within mental health, psychiatry—and outside of medicine as well,” she said.

Children have been indoctrinated with Money’s gender ideology, and now most young people do not believe there is a fundamental connection between biology and gender, which Grossman said is troubling.

The different between the younger and older group is directly due to the spread of gender ideology, Grossman said. This is because children as young as 5 years old have been indoctrinated with Money’s gender ideology in schools.

Kids are repeatedly being told that gender identity is separate from biology and that one can choose one’s gender identity, and it’s being presented as fact in the same way children are taught that the capital of California is Sacramento, she said.

Children are being told that a person can choose their own gender and that “gender-affirming care” is available for them if they want to become a different sex.

The “care” starts with puberty blockers and later progresses to opposite sex hormones and finally sex reassignment surgeries, at which point there is no room for the children to change their minds, Grossman said.

Researchers at Vanderbilt University in Nashville, Tennessee, published a study in JAMA Pediatrics (from the Journal of the American Medical Association) and reported that the number of gender-affirming chest surgeries performed in the United States on adolescents aged 13 to 17 years—the majority of which were elective mastectomies on girls—increased from 100 surgeries in 2016 to 489 surgeries in 2019, a difference of 389 percent.

Adolescents are constantly changing and trying to discover who they are, so allowing them to make a drastic change to their bodies during or before puberty is having a devastating impact on many young people and families, said Grossman.

Prior to the 1990s, the majority of those seeking medical treatment for gender dysphoria were men in their 30s and 40s, Grossman said. Doctors were finding that opposite-sex hormones and surgeries were less effective after puberty, so they thought if they started these treatments before puberty, the patient might have better outcomes in the sex change.

Researchers in Holland came up with a study that’s now referred to as the Dutch protocol. Children were only chosen to participate in the study if they had discomfort with their biological sex from an early age and their discomfort became worse when they reached puberty. They also could not have any other mental health issues.

“They took those kids and they put them on puberty blockers at age 12. And those puberty blockers had never been used before for that purpose, and to this day, puberty blockers are not licensed or FDA approved in any country to be used with gender dysphoria,” said Grossman. They are only approved for disorders or medical conditions like precocious puberty, she said.

The researchers then gave opposite-sex hormones to the 55 children in the study, and later the children could have surgeries if they wanted them. There were problems with this study, including the fact that there was no control group alongside the transitioning kids, said Grossman.

Grossman said there is a lot of evidence to suggest that if the kids who were uncomfortable with their sex at adolescence had been left alone, the majority of the cases of gender dysphoria would have resolved on their own after puberty.

“This Dutch protocol was immediately adopted in other countries, including in the U.S., as ‘this is the solution for these kids,’” said Grossman. 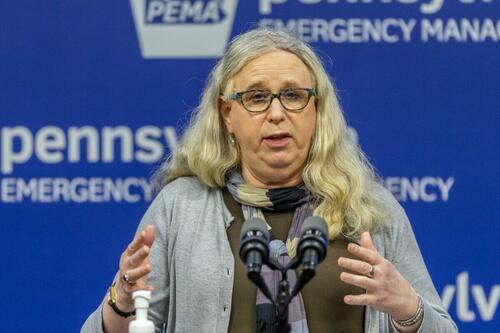 The phrase “gender-affirming care” is a euphemism for radical medical experiments that are leaving patients with long-term physical health problems, and they don’t address the more important mental health issues these young people have, Grossman said.

“You’ll have to note, again, the manipulation of language and the Orwellian use of language, when the term ‘gender affirming’ is used. They’re experimenting on the body, and people are paying a massively high price for these medical experimentations,” she said.

“Gender-affirming care means that whatever the child comes up with in terms of their identity, no matter how old they are or what other conditions they may suffer from, that is their identity and we accept it. We affirm it. And we give them the treatment that they would like to get,” said Grossman.

President Joe Biden and Health and Human Services Assistant Secretary Dr. Rachel Levine are promoting these treatments, and the majority of U.S. professional organizations are backing it, leaving parents to fight an uphill battle should they oppose their child’s wishes to change their gender, said Grossman.

Further, there are not enough long-term studies regarding the impact of “gender-affirming care” on children, but there is evidence about the dangerous outcomes, including being left sterile and developing blood clots, heart attacks, cancers, kidney failure, and early menopause, said Grossman.

Even with all the adverse effects of “gender-affirming care,” the Biden administration is trying to mandate that all medical professionals participate and support children to get these types of treatments, Grossman said.

The Tavistock gender clinic in London has seen an exponential increase in kids seeking sex changes, most with rapid onset gender dysphoria.