WATCH: Man Tackled to Floor After Attacking the Queen’s Coffin - The Jewish Voice

WATCH: Man Tackled to Floor After Attacking the Queen’s Coffin 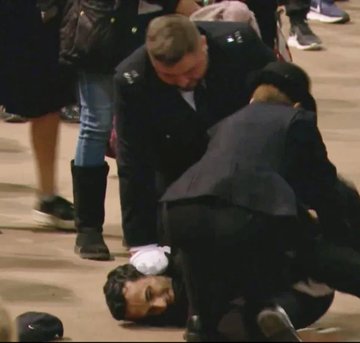 DOJ seeking to have Pence testify in Jan 6 probe

A man who rushed out of a queue of mourners to attack the Queen’s coffin as it lies in state at Westminster Hall was slammed to the ground and dragged from the premises by police and parliamentary security.

The attacker, a black-haired, dark-skinned man still unidentified as of the time of publication, is reported to have bowled over a seven-year-old girl as he dashed at the catafalque bearing the Queen’s coffin.

Eyewitnesses say he laid his hands upon the casket and tugged at the Royal Standard draped over it before being tackled to the flagstones of the 900-year-old hall by fast-moving police constables in the traditional helmets and white gloves reserved for important ceremonial duties.

“Around 22:00 on Friday 16 September officers from the Met’s Parliamentary and Diplomatic Protection Command detained a man in Westminster Hall following a disturbance,” a spokesman for the Metropolitan Police confirmed.

A spokesman for Parliament added that the estate was “aware of an incident in Westminster Hall, in which a member of the public moved out of the queue and towards the catafalque” and that they had “been removed from the hall and the queue restarted with minimal disruption.”

Video footage of the man being dragged from Westminster Hall shows the police being assisted by a man in formal dress — one of Parliament’s doorkeepers, who have helped provide parliamentary security for hundreds of years.

“If you’re going to muck about at Parliament, you want to be tackled by the police, not the doorkeepers — they’ll knock you out. The police would be far more gentle,” an insider told Breitbart London.

This guy was arrested for attempting to grab the Queen’s coffin at Westminster Hall.

An excellent example of robust, quick policing here. Disrupters from Stop Oil and XR should be dealt with in the same way! pic.twitter.com/ggKhKLFSOI

In an impressive show of discipline, none appeared to move a muscle as the man rushed the catafalque — likely to his good fortune, given the Welsh Guards, in particular, are active fighting soldiers, fiercely loyal to their former Colonel-in-Chief, as the Queen was.

While it is guards’ standing orders with respect to tackling members of the public are currently unknown, a member of the Breitbart London team who attended the lying in state was surprised to note that, while the Yeomen of the Guard furthest from the Queen had adopted an attitude of sombre mourning, their eyes carefully scrutinised everyone approaching the late monarch, evidently assessing whether or not they posed a threat.

The incident was highly upsetting for those who had lined up for hours to pay their respects, and in particular to the young girl who was bulldozed by the man as he made his mad dash.

“A person decided they were going to push my seven-year-old niece out the way, run up to the coffin, lift up the standard and try to do I don’t know what. She was grabbed out the way and the police had him within two seconds,” said Tracey Holland, the aunt of the girl, in comments to the press.

Ms Holland said her niece, Darcy, had been in the queue for some 15 hours, and was “not at all” OK after their long-awaited opportunity to pay their respects was marred by the distressing incident.