( JNS) Is there any other country in the world that goes silent once a year for more than 24 hours? In Israel, from the eve of Yom Kippur (Tuesday, October 4) until an hour after sunset the next night, there’s no traffic apart from emergency vehicles, no TV or radio broadcasts, all shops, restaurants, offices are closed, and there are no flights in or out of the country.

Ben-Gurion Airport will close at around 1 p.m on the eve of Yom Kippur and won’t reopen until three hours after the end of the fast day, the following night. Public transportation all over Israel will grind to a halt by 2:30 p.m. and resume only after dark the next day.

But already in the days leading up to the Day of Atonement there’s a certain tension in the air as Torah-observant Israelis take the opportunity for some repentance, prayer and charity to try to ensure being signed into the Book of Life on the holiest day in the Jewish calendar.

Over the past few days, Jerusalem’s streets in and around the Old City, Nachlaot, the Bukharan Quarter and Mea Shearim have been packed with people hurrying to and from the pre-Yom Kippur selichot or penitentiary prayers. Curious secular Israelis by the hundreds take part in late-night selichot tours, where they look in on dozens of congregations where the faithful are immersed in penitential poetry chanted to ancient melodies.

A lively selichot concert put on by the Jerusalem Municipality at the city’s main square, Kikar Safra, is jammed as hundreds take part. Less than half a mile away in the ancient Sultan’s Pool outdoor entertainment space, a star-studded lineup of Israeli music stars leads four consecutive nights of jazzed-up selichot that boom out in high decibels over the nearby neighborhoods. 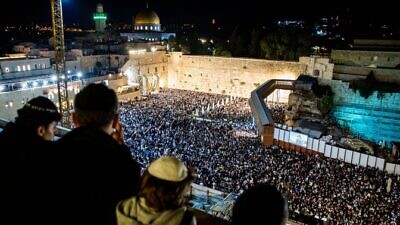 Jews gather at the Western Wall in Jerusalem for the final selichot, or penitential prayers, ahead of Yom Kippur, Oct. 9, 2019. Source: Twitter.

During the day, strains of chazanut waft out of many windows as many radio and TV stations broadcast operatic renditions of the well-known Yom Kippur prayers in a variety of styles. Almost every radio and TV channel also features a physician prescribing pre-fast measures to stave off headaches and ensure an easy fast, and advice on the best type of food with which to break the fast.

One of the country’s four health funds (HMOs) sponsors a one-day “situation room” staffed by leading rabbis and health experts who invite the public to turn to them with any questions regarding how pregnant or nursing women, the elderly, the chronically ill taking medications or couples undergoing fertility treatments should manage the fast day according to best halachic and medical practices.

The busiest kiosks on the streets are those selling shoes made from fabric or plastic, to comply with the prohibition against wearing leather on Yom Kippur.

In the streets on the eve of Kippur, men hurry along with towels to the nearest mikvah (ritual bath). Many have already started building their sukkot in readiness for the one-week pilgrimage festival that starts the week after Yom Kippur. Sukkot structures of all kinds are springing up on balconies, street corners and in front of cafés. The final decorations and the schach roof covering will be added right after the conclusion of Yom Kippur.

Many of the rabbis providing commentary on Yom Kippur in the Israeli media emphasize the festive nature of the day, not only the obvious solemnity. Be happy, we’re told, that God grants us this grand opportunity to get a new lease on life, the possibility of teshuvah (repentance) shows that Judaism is optimistic and forward-looking and allows for the reformulation of both our interpersonal relationships and our relationship with God. Singing and dancing are the de rigueur ways in which many congregations here, especially those at yeshivot, end the Yom Kippur day expressing joy at the soul having been uplifted.

Polls indicate that around 60 percent of Israeli Jews between 18 and 35 will fast, but not everyone feels comfortable in a conventional synagogue setting.

For the past 20 years, a group of progressive Orthodox rabbis under the Tzohar and Ohr Torah Stone banner have been hosting open Yom Kippur prayer gatherings for communities all around Israel. The goal is to enable friendly and accessible prayer held in neutral places (private homes, sports halls, community centers) in a variety of cities and communities, allowing for a comfortable and homey feeling even for those who are not synagogue-goers the rest of the year.

Tzohar has put together a special Machzor prayer book and detailed handout explaining the rituals and the meaning of the prayers that take place during the reverent day, to ensure it is a meaningful and encompassing experience for all. In previous years the Israel Hayom daily included the handout in its holiday edition. Radio ads inviting people to community centers for Yom Kippur prayers note that “no one group owns Yom Kippur—it belongs to all of us.”

During the height of the COVID pandemic the Municipality of Ra’anana, near Tel Aviv, arranged for outdoor shofar blowing. People liked it and this year there will be 50 locations where the blasts of the shofar will be heard all over town.

Because there’s no traffic, it’s become a traditional time for mass outings on bikes. Kids and adults enjoy the one-time freedom of movement for their two-wheeled transportation. As congregants spill out of the synagogues after the Kol Nidre service concludes on Tuesday evening, streets normally clogged with traffic become pedestrian walkways. Many will be dressed in white as a sign of the purity we’re working on during the holy days. Strolling in the middle of a normally busy street, greeting friends and family, people-watching and marveling at the antics of the kids on bikes is the prime entertainment for the evening.

There’s also the obligatory rehash of stories from the 1973 Yom Kippur War in the press. Every year, commentators review the intelligence failures and questionable political decisions that brought Israel to the brink.

As the siren sounds, marking the start of the Day of Reckoning and news reports are quieted for at least 25 hours, you may be sure that our prayers will include a plea for a better year than the one before. Beyond that, who knows? May we all be inscribed in the Book of Life!