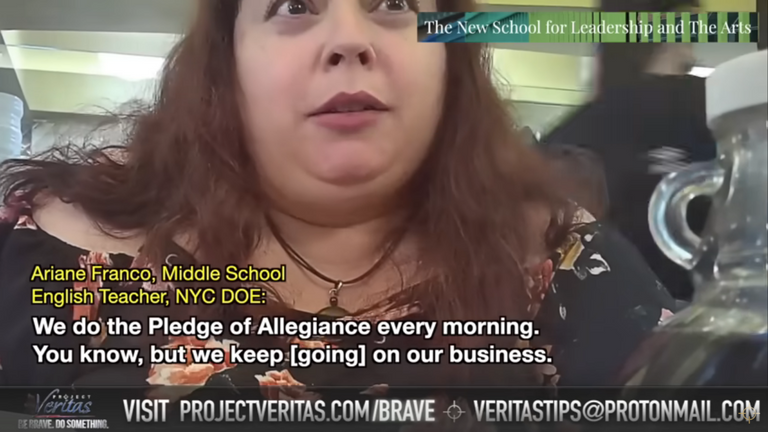 Ariane Franco, who teaches English to NYC middle school students, was recorded admitting how she advises teenagers to engage in violence against those who stand in the way of her political agenda.

“This is what I told my students. I was like, ‘Guys, there’s strategic ways to do this [protest].’ You want to…I brought up [a] crazy organization that have done this. Like, they chose which places to throw bricks in. They chose — and they didn’t do it in their own neighborhood…They didn’t do it to black and brown communities. Doing it to our own community does not make sense,” Franco said.

“You got to go after the people who it’s not directly affecting…Throw it [brick] at the people that are actually doing the things that [need to] change.”

The teacher said the Pledge of Allegiance is not respected in her classroom:

Franco: Like, I tell them — my kids — we don’t stand up for the Pledge [of Allegiance].  We do the Pledge of Allegiance every morning, you know, but we keep going on our business.

Franco: It was a class decision at the beginning of the school year. They’re not talking about me, so I’m not standing up, you know? At one point, when I first started challenging it [the Pledge of Allegiance], I had my kids change the words.

Veritas Journalist: Oh wow. How did it go?

Franco: I used to kneel [for the Pledge of Allegiance] when it first — when BLM — like when the BLM-

Veritas Journalist: You used to what, now?

Franco: I used to kneel.

Veritas Journalist: Kneel in the class?

Franco: I mean, I couldn’t go all the way, but I would kneel-

Veritas Journalist: Would the students do it, too?