Dawn Of a New Era: Alcaraz, Swiatek Win US Open - The Jewish Voice

Dawn Of a New Era: Alcaraz, Swiatek Win US Open

A passing of the torch commenced at the US Open with the retirement of Serena Williams and none of Djokovic, Rafael Nadal, or RodgerFederer being there for the Quarterfinals. The robust festivities concluded Sunday with the next generations icons taking center stage, as the two world NO1s, Iga Swiatek and Carlos Alcaraz, won their respective women’s and men’s singles titles in stimulative fashion. For Swiatek, it was a relatively frontal tournament that resulted in her second slam of the year following a duplicate career French Open win. Still, it was her first taste of glory in New York, and she conceded one set along the seven-match gauntlet. Iga made some shots seem effortless, and her prolific style of play backed up the 37-match winning streak she portrayed earlier this year.

On Saturday, she defeated NO5 seed Ons Jabuer 6-2, 7-6(5), capping off a paramount two weeks from start to finish, becoming the first Polish woman to win the US Open, and seems to be the one emerging from Serena’s shadow. Meanwhile, the 19-year-old Alcaraz has youth-served tennis fans with his superior gumption through three consecutive exasperating five-setters deep into New York nights before downing Casper Ruud in four enthralling stanzas 6-4, 2-6, 7-6(1) 6-3 for his maiden grand slam title, becoming the youngest world NO1 in tennis history. 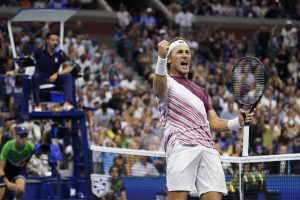 Carlos was formerly amongst the prominent players on tour anterior to the slam, making headlines with his upset of world NO3 Stepanos Tstipas in the third round at the US Open, en route to a quarterfinal berth, where he had to withdraw due to injury. After another calendar year, which saw him win the “Next Gen tournament” for the best in the world 21 and under, wins the ATP 500 Rio open, master Miami, before defeating stalwarts Rafael Nadal, Novak Djokovic, and Alexander Zerev in succession to striking gold Madrid, Carlos touched down in New York with a goal and a dream, achieved Sunday. There was an abundance of contretemps; he was down a break in the fifth to 2014 champion Marin Cilic but rallied for a 4-6, 3-6, 6-4, 4-6, 6-3 victory in a match that concluded at 2:20 AM.

A typical 19-year-old would be jaded, but not Carlos, who elevated his level of play two nights later in a war of attrition against rival Janik Sinner that pantomimes the alpha of a new era in tennis history. Carlos swiped the first set 6-3 from Sinner, who dispatched him in four enthralling sets at the sweet 16 back in Wimbledon, but dropped his serve and trailed 5-3 in the second. Yet, the undeterred Alcaraz rallied with three straight games, starring a breathtaking behind-the-back shot he pulled off to bring up set point #3 of the five he would have, but cough up, allowing Sinner to level the match with a 7-6(7) second set victory. The third set confounded of a break advantage for the Spaniard; however, a rapid defensive retort from Janik sent proceedings to another tiebreaker, where Sinner flashed the prowess that has made the 21-year-old a fan-favorite around the tennis world, with otherworldly shots, outpacing the expeditious Alcaraz for a 7-0 shutout and a 2-1 lead.

Sinner acquired the early break in the fourth and, serving at 5-4 40-30, was poised to extinguish the youngster for the third time this year. However, a missed forehand gave Carlos a life preserver, and he rode it to a 7-5 fourth set triumph, forcing a decider, as after four hours 25 minutes, the two showmen weren’t nearly finished.

The finale of this memorable encounter sported dynamism usually notorious for battles within the big three, as the scintillating level of tennis had Arthur Ashe stadium rocking into the wee hours of the morning. At 2:50 AM on Thursday, Alcaraz boomed a last ace down the tee to cap off his 2-3 comeback with his fourth straight game reaching the magic number for a 6-4, 6-7(7), 6-7(0), 7-5, 6-3 coup in 5 hours and 15 minutes. Up next was American Frances Tiafoe in the semifinals, who bested Rafael Nadal two rounds earlier and,backed by his home crowd, was seeking to become the first USA male to reach a US Open final for the first time since 2003. Though not as lengthy, lasting 4 hours and 19 minutes, the quality of play matched the quantity of the moment, as both players dazzled the crowd with their torrid cunning and ingenuity.

Alcaraz endowed himself with a 6-7(8), 6-2, 6-1, 5-4 lead and had match point on his racket. Yet Tiafoe stunningly reached into his bag of tricks with a precise drop shot, urging on the sellout crowd, and it would lead to a tiebreaker, which Tiafoe took 7-4, forcing a fifth set. Again, any average 19-year-old would crumble, having squandered a monuments opportunity, but Carlos is mature beyond his years and kept a level head as he embarked on his third straight match with a fifth set. Alcaraz seized the early break, straightened out his wobbly serve, and outstretched for a lob that kissed the back line and brought up triple match point, officially booking his spot in the final moments later when Frances buried a forehand into the net.

In the championship Sunday that would decide a first-time winner and tennis’s new world NO1, the 6 foot 1 Alcaraz roused fans with his thunderous strikes, stoic mentality, fierce competitiveness, limitless stamina, and yes, giddy joy of playing the game, overwhelming the feisty new world NO2 Casper Ruud in four tight sets. Casper was previously subdued in the Miami final, dropping the tilt in straights to Alcaraz, and was smashed to bits by Nadal in the French Open final.

Casper’s adjustments included low balls, allowing him to flex his agility, including a terrific topspin forehand, which he’d used while tormenting the other six challengers, and Alcaraz was no exception. Casper turned his skill on the teenager, who showed weariness, as his spry powers temporarily dispersed, and Ruud took full advantage of it. But akin to the fortifying week, Carlos found the next gear, saving four set points, before punishing Ruud in the spirit-breaking tiebreaker, where he reeled off a 7-0 run after dropping the first point, wresting command of his destiny. A feeling of coronation hung over the fourth set as Alcaraz snatched the break and served his way to victory, collapsing on his back in Nadal-esque fashion; having spent a record 23 hours, 40 minutes on court, stunned in disbelief.

His ascend to NO1 means he’s matched the achievements of his longtime coach Juan Carlos Ferrero when he was in his playing days and isn’t satisfied in the slightest. I want to be on top for many weeks, many years; I want more (trophies).” We hope that that will be the case for his sake and the sport of tennis.

For our two champions, who each took home $2.6 million, they’re both seemingly scratching the surface and are world NO1’s, defeated the world NO2’s in the finals, and each has been dubbed the “Next GOATS” by their peers, commentators and fans. The New York crowd fancied an attendance record of 776,120 for the past two weeks, amassing the previous record of 737,872 from 2019.

This Open had it all, from Serena’s farewell to the emergence of 18-year-old Coco Gauff.

Elsewhere, Nick Kyrigoes infuriated world NO1 and reigning champ Danil Medvedev in the fourth round and smashed himself away following his five-set loss to semifinalist Karen Khachanov in the elite eight. But when the Sun went down Sunday, two champions reigned supreme, and both are now the standard other players will look to emulate headed into 2023.