Glitz, glamour and outstanding generosity were in abundance on Sunday, July 24th on the French Riviera as prominent personalities from across the globe gathered at the annual fundraising gala and auction for the Sheba Medical Center in Tel Aviv, Israel.  Among those present at the Sheba Medical Center gala (that was held for the first time at the Yacht Club in Monte Carlo in the principality of Monaco) was Anna Maria Kaufmann, Sarah Faberge, Carola Fersti and Heidi Princess von Hohenzollern and company. Thanks to the generosity of those in attendance, $3 million euros were raised for the hospital.

The motto of the high-profile event, under the high patronage of His Serene Highness, Prince Albert II of Monaco, was “Co-Existence for Peace through Medicine and a Better World.” The objective of the gala and auction was to collect donations for the many aid missions of the Sheba Medical Center, such as the field hospital run by Sheba in Ukraine in the framework of the State of Israel’s humanitarian mission. Sheba is the largest medical center in Israel and the entire Middle East, which by the way is half the size of Monaco, treats patients regardless of nationality, skin colour and religion.

The hospital, affiliated with Tel Aviv University, includes centers for nearly all medical divisions and specialties and serves over one million patients per year.

Internationally renowned Israeli singer Riki Ben-Ari delights the gala audience with her beautiful singing. She is also known as the “Powerhouse Diva”

The ranking came at a time “when the hospital is advancing medical innovation on all fronts including dealing with the coronavirus crisis using ground-breaking telemedicine solutions to treat coronavirus patients who are quarantined at a special hospital complex,” a statement by the Sheba Medical Center read.

Newsweek wrote that Sheba Medical Center is a leader in medical science and biotechnical innovation, both in the Middle East and worldwide. The center’s collaborations with international parties have advanced innovative medical practices, hospital systems, and biotechnology.

Professor Yitshak Kreiss, Director General of Sheba Medical Center stated at the time that the hospital is “especially proud to be on the Newsweek list for the fourth consecutive time, with the achievement denoting “another year of innovative medical achievements which are impacting the world.”

“I am especially proud of our 9100 medical professionals who wake up each morning and come to work dedicating themselves to thinking outside the box, creating new ways to giving patients the best care and dealing with crisis like the coronavirus by employing game changing technologies such as telemedicine,” Professor Kreiss said, adding that at Sheba staff used the phrase “Hope has no boundaries. And this is what motivates us.”

Hosting the event on the French Riviera was Professor Kreiss and the entrepreneurial couples Dorit and Marc Assaraf as well as Dr. Yana and Dr. Karl Hauptmann. The hosts were thrilled to welcome approximately 200 guests including internationally recognized celebrities, prominent members of cultural society, art collectors and high profile personalities of the global business community.

Guests included Sarah Fabergé, the great-granddaughter of the Russian imperial jeweller Peter Carl Fabergé (known for his Fabergé eggs) and Isabell Kristensen (former supermodel and fashion designer), who donated one of her coveted couture dresses to the auction. Other guests included Doris Brugger (DORISSIMA), the jewelers, Nilly and Motti Gross who donated jewelry for the auction. Also in attendance were former Hilton President Rudi Jagersbacher and Phillip Muhr (COO Hallstein Water), who had his pure water from the Dachstein region served during the evening, came from Austria.

The guests of honor included Sheba Prof. Raz Somech (Director of the Pediatric Department and Immunology Service at Sheba’s Edmond and Lily Safra Children’s Hospital), Yoel Hareven (Sheba Director of the International Division & Resource Development Sheba Medical Center) with wife Anat,  Prince Albert of Monaco sent his Chief of Cabinet Laurent Anselmi as representation and President of the Jewish Community of Monaco Aaron Frenkel with his wife Maja. N-TV presenter Carola Ferstl, who came with her children Julia and Georg, charmingly served as mistress of ceremonies for the course of the elegant evening. The Israeli “Powerhouse Diva” Riki Ben-Ari thrilled the attendees with her unique and beautiful singing voice.

Famous musical singer Anna Maria Kaufmann was in attendance with her husband Prof. Eckard Alt, CEO Isarklinik Munich. She said, “I always enjoy coming to the gala and I sang at the Sheba Gala in St. Moritz because I admire the work of the Sheba Medical Center . It is really a wonderful hospital of peace.”

The Sheba gala auction was conducted by veteran auctioneer Geoffroy Ader. The results were highly successful in terms of bringing in the kind of donations that are urgently needed for medical equipment for the hospital. Among the items auctioned off were dream trips, including to the “Carlton Hotel” in St. Moritz, the “Waldorf Astoria Berlin” and “Spirit of Son Fuster”, a luxury house on Mallora, as well as valuable jewelry and magnificent works of art.

Also present at the Sheba gala were Jewish Voice publisher David Ben Hooren and his wife Bunnie, who travelled from New York City to attend the auspicious event. Mr. Ben Hooren and his wife were honored guests of academician Amir (Anri) David, the founder and CEO of Black Wall Global, former SEA to the President of the International Cyber Police, and Senior Adviser of the National and Internal Security Service in Israel. 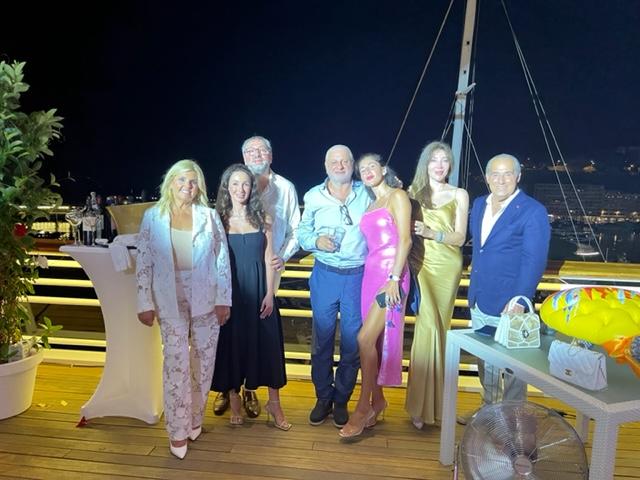 Mr. David is an international expert of the highest level on cyber-Intelligence, critical infrastructure cyber security, counter-terrorism, as well as a chief advisor to governments around the world, international organizations and companies on numerous issues related to national & international security and intelligence. He also focuses on scientific and technological developments, emerging technologies, innovation, and disruptive potential of new technologies, particularly on the issue of crime prevention, criminal justice and security.

The evening’s proceeds, including a donation of 2 million euros from Mrs. Chella Safra alone for a new department that will benefit the young patients at the Edmond and Lily Safra Children’s Hospital at Sheba Medical Center. “We would like to thank all guests for their generous support,” said host Prof. Yitshak Kreiss. “The Sheba Medical Center was again voted one of the ten best hospitals. On the one hand, our “City of Health Hospital” stands for innovation and transformation. But it is also always the hospital of peace and help,” he said at the gala.

In 2018, it was reported that the Sheba Medical Center had submitted its permit application to build a new 2,000 square meter, three floor, diagnostic and research center for nuclear medicine and molecular imaging. Nuclear medicine can be used for the diagnosis and treatment of a range of diseases including heart disease, cancers, strokes and Alzheimer’s.

The entire basement floor (almost 1,000 square meters) will be dedicated to housing a cyclotron, a nuclear reactor, which will produce small quantities of nuclear isotopes for use in molecular imaging. These nuclear isotopes are used for safe and pain free 2- and 3-dimensional imaging techniques, which can detect cellular changes within the human body. The detection of these cellular changes will allow medical professionals to offer a personalized approach to diagnosis and therapy through earlier diagnosis and assessment of treatment efficacy.

The dedicated cyclotron, located at Tel Hashomer, will allow Sheba to expand its clinical and research work through on-site p

roduction of nuclear isotopes which are too short-lived to be transported from the existing Israeli facility.