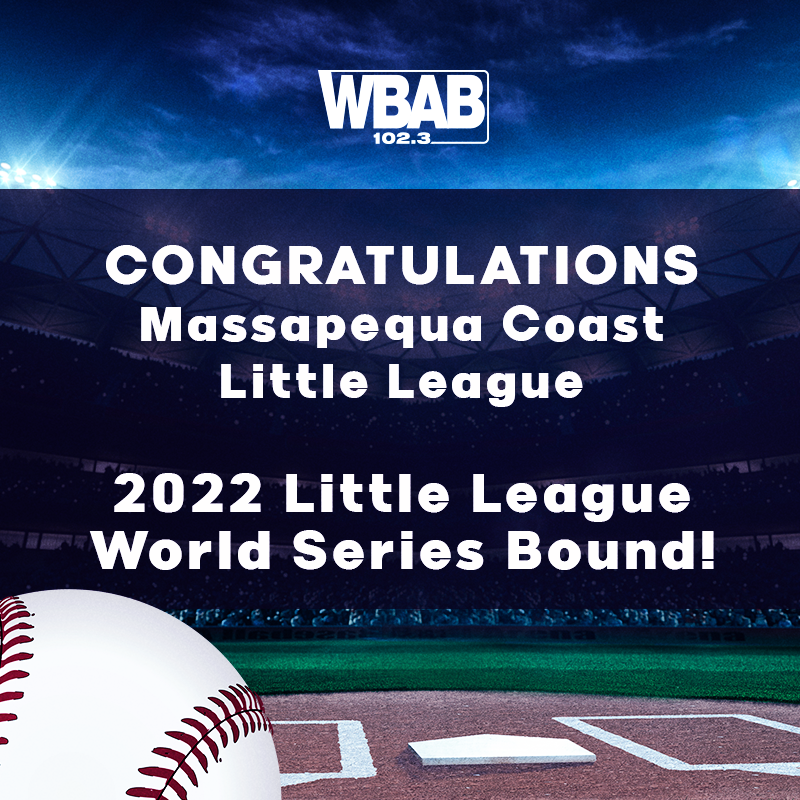 Marvin A Azrak
After a drought, perhaps more strenuous than their borough’s name implores, a profound group of Long Islanders will finally have their moment.
Massapequa Coast punched its ticket to the Little League World Series in the most immortal fashion: a 4-0, no-hit victory over the indomitable Toms River East of New Jersey to clinch the Metro Region in Bristol, Conn., on Friday night. They’re the first Long Island team to go to the World Series since Rockville Centre in 1978.
It’s the first time Massapequa Coast has ever reached Williamsport, Pa., in its 72-year history.
Manager Roland Clark was enamored with the attention and, after the no-no from pitcher Joey Lionetti on ESPN, dubbed the boys as “America’s team.” “Massapequa Coast has now overtaken the Dallas Cowboys as America’s team. This is the underdog that nobody expected to be here,” said Nassau County executive Bruce Blakeman, who attended the game Friday and has turned into an avid Massapequa Coast fan. “They have true grit, determination, and a great sense of teamwork.” Even native Scott Mayfield of the Islanders noticed tweeting, “Congrats to Massapequa Coast Little League.. huge no-hitter from Joey Lionetti! I can’t wait to watch you guys kill it in Williamsport 👊👊👊”
Massapequa’s first game in the World Series, which begins Wednesday, is scheduled for Friday at 7 p.m. (ESPN) against the winner of a match between Bonney Lake, Wash., and Honolulu.
With Williamsport on his mind, Clark said he hasn’t had the chance to let things sink in. But when it comes to the team’s success and popularity, he told his squad, “job well done and well deserved.”

The boys certainly have a legitimate shot at realizing that dream of winning a title, but the premade to Williamsport won’t be repressed. After winning their league, district, and sectional tournaments, onerous emulation awaited them in the regional — representatives from New Jersey, Connecticut, and Rhode Island vied for the coveted spot in Williamsport. Previously, Massapequa hardly needed to clench and sweat to the final out. In the state championship, its two single-elimination contests proved delectably stress-free.

In the semifinal, against East Greenbush Castleton, Massapequa romped to a 10-0 mercy-rule victory. Then, in the finals against West Nyack Nanuet — which had previously defeated Massapequa in group play — Massapequa exacted revenge via another mercy-rule win, 15-5. In baseball, it’s about how you venture the talents on both sides of the ball, and these boys illuminated that by boasting the highest run differential in that tournament, yielding the least runs and plating home the most.
“The great thing about my team, from the first guy to the 11th guy, is that everyone contributes,” Clark said. “Everyone has something special to offer. We don’t rely on one player. “That made the state tournament and this ride so far special .”
Lionetti’s sublime exploit in the championship game will now be inextricable to this defiant run. Massapequa had to beat Toms River, not once but twice, to advance to the Little League World Series in Williamsport, Pa., which will begin Wednesday. Massapequa beat the New Jersey squad, 6-3, in extra innings during the opening round in Bristol and squeaked by 7-5 over Fairfield (Conn.) American to reach the finals. The Massapequa miracle continued after the no-hitter from Lionetti. Their overall record from start to finish was 15-2.
Joey turned aside nine, hit three batters, and issued one walk in his six-inning no-no. Reminiscing about his prominent contrivance, Lionetti said he doubted he would see the day.
“I didn’t think we would make it this far in the Williamsport run,” Lionetti said. “I threw a no-hitter in a championship game. I didn’t think I would do that [either].”
But halfway through, Lionetti sensed the voodooism oozing from his arm
“I realized they weren’t catching up to my fastball and weren’t seeing my curveball,” he said.
“He was unbelievable,” Tom Rivers skipper Mike Mendes said. “Give him all the credit in the world. To step up like that, he deserves every accolade he gets at this stage.”
“In the beginning, I didn’t realize it, but then I looked up at the scoreboard in the fourth inning and realized he was throwing a no-hitter,” said Massapequa shortstop Christian Bekiers. “He was great.”
“Jersey shouldn’t be ashamed; Lionetti was (legendary),” former Little league champ and MLB star turned LLWS broadcaster Todd Frazier said.
“I think it just says a lot about New York baseball,” said Massapequa Roland Clark, who commended his team’s “New York toughness” ahead of the win Friday. “They want to be competitors and always want that game and that tough outing. I think the entire Metro Region possesses that, and we came out on top..”
Massapequa first got on the board in the bottom of the second inning with an unearned run. After Massapequa’s center fielder, Liam St. George, hit an infield grounder with the bases loaded, Toms River overthrew home plate, and right fielder Mikey Castellano scored.
“I looked at the boys [then] and in their eyes to see where their emotions were,” Clark said. “It wasn’t of over-excitement; they were brimming. with confidence.”
Massapequa made it 3-0 on an RBI single down the left field line from shortstop Christian Bekiers in the fourth. Second baseman Anthony Badagliacca scored from second.
Massapequa stretched the lead to 4-0 in the fifth. First, a sacrifice fly from third baseman Michael Clark scored St. George, who pinch ran for first baseman Alex Pietrangelo. The next batter, Lucas Mininni, drove in Castellano from third on an RBI single.
Proud parents — who filled the first-base stands and had boxes of yellow and navy “New York State Champions” T-shirts made — greeted their Williamsport-bound winners to the tune of Frank Sinatra’s “New York, New York” playing over the public address system. That came simultaneously with Lionetti getting Gatorade dumped on him by his teammates.
“I wanted that Gatorade bath,” Lionetti said with a grand smile equivalent of a champion.
Lionetti and his teammates have a mission beyond winning more ball games when settling in at the Little League World Series. They want to make friends.
“We made a couple of friends with the teams [in the Metro], but I’m hoping to make more in Williamsport,” he said. “I’m really looking forward to dorming again with my teammates and to keep getting closer with them, plus they have an arcade and stuff there.” Ryan Huskloot said he’s looking forward to exchanging with international teams — which have rejoined the tournament for the first time since the COVID-19 pandemic — in the upcoming days.
“Meeting all these kids from other countries, they’re the best in their nation, and they worked hard for it,” he said. “I’m happy to meet them and talk to them about how baseball is where they’re from.”
Beyond the game uniting nations, some on the Massapequa team are already thinking like professionally endorsed athletes. Though this moment is enough for the Massapequans, Clark was able to share a preeminent moment with his son, third baseman Michael Clark.
The manager reached the aforementioned regional tournament while playing for Massapequa International Little League in 1989 but bounced on the same Bristol Field. That 1989 team was the most recent from town to get that close to the World Series.
“[My dad] had that same [elated] feeling after winning states and going to regionals; I just loved sharing the moment with him,” said Michael, who immediately jumped into his father’s arms at the final out.
The younger Clark is soaking it in.
“I know I’ve done something most kids have never done or dreamed of,” he said. “We’re pumped; we’re going to use all of the energy we’ve got, keep fighting the whole time.” “New York, we here!”