(JNS) In a report on anti-Semitism in entertainment and sports, as well as on digital-media platforms, Creative Community for Peace (CCFP) calls the extent of the anti-Semitism problem “glaring.”

The 20-page report, “Fomenting Hate: How the Entertainment and Sports Industries Can Address the Growing Threat of Antisemitism,” documents hundreds of examples of incidents over the past year-and-a-half involving film and television studios, celebrities, influencers, sports figures and social-media platforms.

CCFP, an organization comprised of entertainment industry professionals dedicated to combating anti-Semitism and anti-Zionism, published the report earlier this month.

A certain perception of Jews expressed as hatred towards Jews, the targeting of Israel with Israel conceived as a “Jewish collectivity” and Holocaust denial are considered anti-Semitic, according to the definition.

In a section focused on film and television, the CCFP report says the HBO series “Lovecraft County,” featuring an antagonist named Epstein that conducts scientific experiments on black children and adults, has “overt anti-Semitic tropes.”

Addressing anti-Semitism in the sports industry, the report describes when prominent NFL player DeSean Jackson posted a quote in 2020 on his Instagram, falsely attributed to Adolf Hitler. The quote claimed Jews “blackmail” and “extort” America.

CCFP also highlighted the frequent anti-Semitic slurs directed at fans of Amsterdam soccer club AFC Ajax. The team has long been associated with the Jewish community, and those rooting for opposing teams have used statements including, “Hamas, Hamas, Jews to the gas,” according to the report. 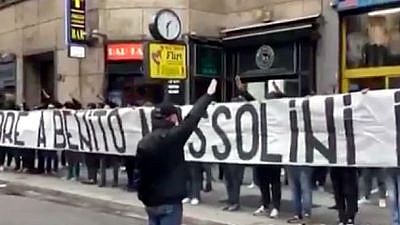 ‘Furthering tropes that Jews are all wealthy’

In a discussion about music, CCFP doesn’t only document the widely known anti-Zionism of founding Pink Floyd member Roger Waters, whose concerts have featured animated scenes of Israel dropping bombs in the shapes of Stars of David and dollar signs. CCFP also notes the prevalence of anti-Semitic hip-hop lyrics.

The report also found that Rappers, including Jay Electronica, Mos Def and Freeze Corleone, are perpetuating stereotypes and conspiracies about Jews controlling the media. Corleone, a French recording artist, has released blatantly anti-Semitic lyrics, including about Holocaust denial.

Ari Ingel, director of CCFP, previously worked as a music manager and attorney. In a phone interview, he said hip-hop lyrics often feature philosemitism, a notable admiration for the Jewish people.

“I don’t think when Jay Z [raps about earning wealth like Jews], he means it as a negative,” said Ingel. “He means it as aspirational. But when he and other rappers don’t realize, it is furthering tropes that Jews are all wealthy, and that’s obviously not the case.”

On TikTok, “Jewish teens say they are bombarded daily with spam and death threats in the comments,” the report says.

On Spotify, problematic podcasts from Nation of Islam leader Louis Farrakhan are posted, along with songs by musical artists with clearly anti-Semitic lyrics, including National Socialists Black Metal Bands.

And on Clubhouse, a newer app, “the conversations are live and monitoring spoken language is difficult in real-time,” according to the report. The names of audio-only chat rooms on Clubhouse have included “White Jews have more power than blacks in America,” “The Jews & Asians vs Black Reparation is the REAL BATLE” and “Were 6 million Jews really killed (serious topic).”

The report offers practical reforms for companies and corporations, from adding an expert on antisemitism to Diversity, Equity and Inclusion (DEI) teams to holding mandatory annual training sessions on anti-Semitism for human-resources departments.

CCFP recommends that entertainment companies, sports leagues and digital services adopt the IHRA definition. This way, executives can identify when statements, events, content or actions cross the line into anti-Semitism.

Media organizations also ought to adopt the “Tevye Test,” which is inspired by writer Ben Freeman’s work, says CCFP.

While many groups monitor anti-Semitism, too few look closely at the two industries responsible for shaping public opinion: entertainment and sports, says CCFP.

And while Ingel is not expecting change overnight, the report offers a first step towards transformation and creating accountability in industries in need of it.

“This isn’t going to be the end all be all; it’s a start,” he said. “It will take many years to get these things adopted. It’s a process.”