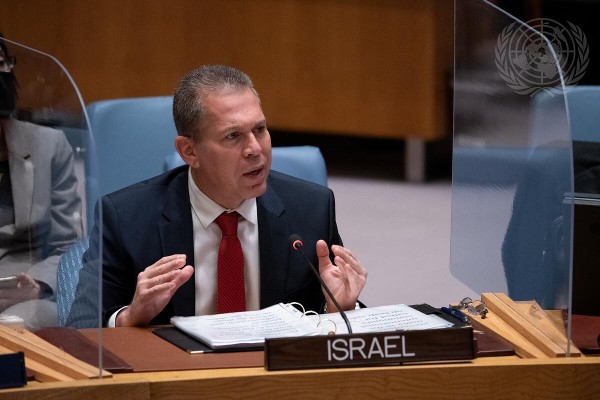 (A7) During Israeli Ambassador to the United Nations Gilad Erdan’s interview with Israel National News Real Talk with Hadassah Chen at the National Jewish Retreat in Miami, Florida, organized by JLI, he speaks with excitement and eagerness about two important points that have nothing to do with politics or the upcoming election.

Erdan focuses on the importance of Jewish education and how vital education is for our children against assimilation and antisemitism.

He says that if he takes one important message from his time in the United States as ambassador back to Israel, it’s the importance of Jewish education.

“Jewish education is maybe the most important thing for our future, not only is it the best remedy against assimilation, but also to keep us together, to make sure that the next generation knows no less than the current generation and previous ones,” Erdan says.

“How to get people closer, how to in a way entice them, to try to become more observant, but of course only if they want to. People should practice what they want to, but definitely the way of Chabad. What I also saw here with JLI is something that I am going to think about and it’s a very beautiful way to… keep our tradition and heritage and things that kept the Jewish people together for thousands of years while other empires have disappeared and collapsed.”

Erdan also touches on how we should fight the lies against Israel being spread by very powerful social media influencers who don’t really know or distort the facts.

“Our enemies have built a network of lies and hate and incitement and today they try to weaponize everything,” he says. “They know that they cannot defeat the IDF in conventional war so what they try to do is to delegitimize the the whole notion of the Jewish State, our existence, they try to portray us as human rights violators.”

He continues: “I was the one who was tasked with fighting the BDS Movement, BDS activists and organizations, and I always was on the offensive, exposing their lies, their hate, their connections to designated terrorist organization, and we need to build our own network – a network of truth, of hope, of light. We should connect to each other and spread our messages, which is of course the truth and I believe this combination of having faith and standing up for the truth is going to prevail.”

When asked about what happens when he walks around the corridors of the UN and encounters ambassadors of countries that are enemies of Israel, such as Iran, Erdan comments:

“I don’t look at them and I don’t speak with them, the Iranians or the Syrians or whoever. But secretly I can tell you that since the Abraham Accords were signed the atmosphere towards Israel is much better, and other than holding events with our new Arab partners I know today we feel that as the children of Abraham, how much we have in common, how many challenges we can share and address together within the Middle East. But other than that I have many secret meetings with Arab ambassadors and I truly believe that this new circle of peace is definitely going to expand and not in the far future, I mean hopefully until next JLI conference.”

In terms of his future plans and whether he hopes to be prime minister one day, Erdan replies that as a diplomat he cannot answer political questions but explains his personal philosophy.

“I have a philosophy that anyone who does something wants to reach the top but this is in general, not specifically about myself of course,” he says.