A Message to the Jewish Community: If You Live in the 10th Congressional District - You Must Vote Against Yuh-Line Niou! - The Jewish Voice

A Message to the Jewish Community: If You Live in the 10th Congressional District – You Must Vote Against Yuh-Line Niou!

If you live in Boro Park between 14th Avenue and 8th Avenue or lower Manhattan, you are in the new 10th Congressional District (CD). You must vote in the August 23rd primary against Yuh-Line Niou. Brian Robinson a Jewish businessman who is one of 12 Democrats running to represent NY’s newly drawn 10th CD, put up a 16 Twitter thread post about Jews for Racial & Economic Justice (JFREJ) and its political arm, the Jewish Vote (which endorsed Niou), as a “far-left scam.  We have allowed this pro-dystopian organization to be used to misinform the Jewish community, for far too long,” Robinson said. “During election time, JFREJ’s political arm, The Jewish Vote, pretends to represent the mainstream Jewish community’s values and interests, when the group is really controlled by a very left-wing Jewish activists.”

Jewish Voice last month wrote: The left-wing group, The Jewish Vote endorsed Yuh-Line Niou for congress in the 10th CD. The Jewish Vote is the electoral arm of Jews for JFREJ. Ellman-Golan is the chief strategist behind both organizations. Linda Sarsour is a controversial Palestinian-American activist who promotes intersectional left-wing activism to address a wide array of left-wing issues. In 2017, Sarsour gained national prominence as a co-chair of the national Women’s March protest against the inauguration of President Donald Trump. Sarsour is an outspoken anti-Israel advocate and has promoted numerous anti-Israel policies. The Anti-Defamation League has criticized Sarsour for apparent anti-Semitism.

By Voting in the August 23rd Primary, You Stand-Up in Support of the ADL 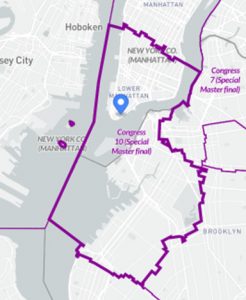 Anti-Defamation League’s CEO, Jonathan Greenblatt was attacked by JFREJ’s communications director, Sophie Ellman-Golan for retweeting Robinson’s posts that the group calling itself  “The Jewish Vote isn’t representative in any way of the majority of the Jewish community.” Commenting on Greenblatt’s original endorsement of the Twitter thread, an ADL spokesperson told another newspaper that the CEO’s only intention was to suggest “how out of touch [JFREJ] is with the majority of the Jewish community.” In a letter signed by socialists City Comptroller Brad Lander, former left-wing Manhattan Borough President Ruth Messinger, J Street President Jeremy Ben-Ami, and rabbis and representatives from over 60 synagogues, Jewish groups, and non-Jewish progressive groups, went after Greenblatt for his retweet of Robinson’s Tweet. To read the full letter, click here.

Robinson charged that The Jewish Vote endorsed candidate Yuh-Line Niou & her radical policies of abolishing the NYPD are the reason why the Asian community of Lower Manhattan, Chinatown & Sunset are getting attacked daily by violent criminals released by judges due to Yuh-Line liberal “bail reform” policies in Assembly. It is important that the Jewish Community and everyone against the liberal bail law, vote against Yuh-Line Niou.  Jewish Voice: More about the other candidate running in the 10th Congressional District

Brooklyn currently has no Jewish members of congress. In the 1970s and 1980s Brooklyn had two members of Congress. That was partly caused by the Eastern European Jews, many Holocaust survivors that settled in Southern Brooklyn, voting in every election. At that time 15% to 20% of Brooklyn votes in the all-important primaries came from that community. Today most of Brooklyn’s votes come from the progressive community in the northern part of the borough, where the left-wing Jewish Vote organization, and progressives are very strong. In an important District Leader race in Boro Park, this year, where both sides were pulling out their supporters, only 4500 voters showed up at the polls. In another District Leader race in progressive Park Slope and Brooklyn Heights, 18,500 voters showed up at the polls, over four times more from the same size in the population districts. Since the 1990s the norm in the Jewish community is that activist leaders reach out to whoever is elected and make deals with those elected officials, many very progressive, for the community and themselves. The problem with this model is that with the falling Jewish vote, very liberal progressives are getting elected, hurting the community. Community leaders reaching out to cut deals with left-wing politicians have not changed the very liberal bail law which is partially responsible for the increasing antisemitic attacks on members of our community.