(Israel Hayom) On Sunday night, a young man sitting next to me at a restaurant in Riyadh asked me where I was from. “Israel,” I replied. He laughed and moved on. Shortly before leaving, he looked at me again and said, “Israel, really?” I said “yes,” to which he replied, “Wow, welcome. We welcome everyone here happily, from all religions.”

Saudi Arabia was a pleasant surprise. Friendly. Happy. Not even mentioning Israel brought anyone down. I tested this on several cab drivers and market vendors. Some smiled and shook their heads in disbelief or worry, others were curious and struck up a conversation. I wondered if any of them had ever met an Israeli before, or heard Hebrew, but no one made us feel unwelcome in the kingdom, home to the holiest sites of Islam, not even for a moment.

US President Joe Biden’s upcoming visit to Israel and Saudi Arabia will not lead to formal ties between the two nations. Biden is scheduled to travel to Saudi Arabia next Friday, after having visited Israel. In the resort city of Jeddah, he is to meet with leaders of the Gulf states and several other prominent Arab countries, but more importantly, with Saudi Crown Prince Mohammed bin Salman, effectively ending the boycott Biden imposed on him after the assassination of journalist Jamal Khashoggi in 2018.

Biden wants Riyadh to increase its oil production to help lower spiraling oil prices in the United States, but will also try to promote normalization with Israel. As such, he will try to have Israeli representatives accompany him on his visit to the kingdom, although the matter is not yet final.

Everyone says that Israeli-Saudi ties will warm slowly, step by step, over an extended period. But my visit to Riyadh shows the profound change Saudi Arabia is already experiencing. 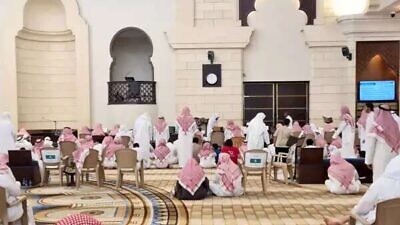 Worshippers at a Riyadh mosque. Photo: Yoav Limor.
It is transitioning from the ultra-conservative regime characterized by the sons of Saudi Arabia’s founding father, Ibn Saud (the youngest of whom, Salman, is the current king) to slowly embracing the West under his grandson, Crown Prince Mohammed bin Salman.
A photo of the two, King Salman and his son, can be seen all across Riyadh. The kingdom is gearing up toward the change of government, which carries a message for Israel as well: going from distant and cautious ties under the previous government to increased cooperation in a variety of areas.

During his visit, Biden will focus on the regional missile defense program, in which Israel is to be a participant, but Israeli companies—technological and other—are already operating here, in various capacities.

Quite a few Israelis have visited Saudi Arabia in the last few years, mostly defense officials led by the Mossad. Everything was done in complete secrecy, usually using private jets. But recently, Saudi Arabia has begun to gradually open its doors to Israelis who hold foreign passports, especially business people.

Although it might take a while before we see groups of Israeli tourists flood the streets of Saudi Arabia, the process is what counts. Soon, Israeli companies will be able to fly east over Saudi Arabia, and perhaps next, launch direct flights to Mecca, for pilgrims.

Religion is evident everywhere in Riyadh. In clothing, of course, with men and women dressed in modest attire. Alcohol is out of the question, as it is not even served in hotels or on Saudi airline flights.

The mosques are full, and prayers can be heard from the street. Just before takeoff, after the security procedures, a recording of the Muslim road prayer sounds.

Saudi Arabia is less touristy than other Gulf states, such as the United Arab Emirates and Bahrain. It does not have many foreigners, except for low-wage workers, mostly from the Far East, who can be seen everywhere, cleaning shopping centers, bagging groceries in supermarkets and working in construction.

Although Riyadh has all the Western brands, including the most high-end ones, the streets mostly feature standard signs, and the people are simple. This is due, among other things, to the equal distribution of wealth, which is contrary to the situation in the United Arab Emirates and Qatar, where only a few enjoy wealth. This will also be the crown prince’s main challenge: to give the entire people a sense of belonging.

The last few days Riyadh has been incredibly hot, over 40°C (104°F). Most residents live in air-conditioned homes, but life is vibrant outdoors too: the markets are crowded, especially in the late hours of the day.

Saudi Arabia also has all the best goodies, from djellabas, sandals and perfume to spices, gold and traditional knives, and all at relatively cheap prices. 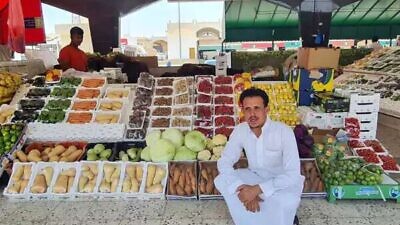 In general, Saudi Arabia is surprisingly cheap: fruit and vegetables are less than half as expensive as in Israel (including supermarkets), clothes are 25% cheaper (including brand names), and gas is two shekels cheaper per liter (the global fuel crisis seems to have skipped Saudi Arabia).

It is likely more Israelis will travel here in the future. Some for business, others out of curiosity. Either way, they will discover a country much less threatening than imagined. The opposite, actually: Saudi Arabia is very pleasant and the atmosphere is relaxed.

It is doubtful, though, whether Saudi Arabia will become a popular destination for Israelis—but the change in Israeli-Saudi ties is a historic event that one just cannot help but be excited about. If Israel exhibits uncharacteristic patience and understanding that such processes take time, there is infinite potential for the ties between the two countries.

Yoav Limor is a veteran journalist and defense analyst.