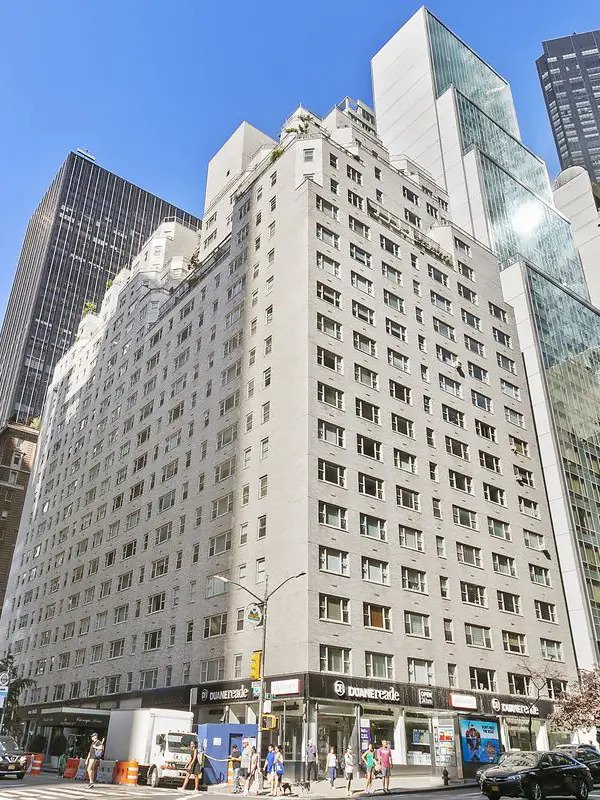 A lawsuit has been filed by a resident at a 21-story co-op building in Manhattan’s Billionaires’ Row.

Trouble has been brewing at Carnegie House at 100 W. 57th St., on the corner of Sixth Avenue, where a studio sells for $100,000 and a three-bedroom penthouse with a terrace goes for $659,000. As reported by the NY Post, the 324-unit building must shell out a total of $280 million to purchase the land where the structure stands or face an additional $26 million annually in ground rent in addition to the $4.4 million a year currently being paid. If they don’t meet the new financial obligations, the homeowners may lose their homes.

Compared to the giants in the posh neighborhood, the doorman building is modest, with many of the residents living on fixed incomes.  Insiders say many of the current owners won’t be able to afford their share of the land purchase nor the colossal jump in rent option.  “Up to 90% of residents, some of whom have lived there for 50 years, stand to lose their homes,” said one insider.

A suit has been filed by Birinder S. Madan, a resident at 100 W57th St since 2003, who is suing all 10 of the co-op board members, as well as consulting firm JM Zell Partners. Filed also on behalf of the other shareholders, the suit claims that the board is going along with the land owner’s “illicit” scheme to overcharge residents, instead of fighting for the shareholders’ rights.

The co-op building sits on prime real estate owned by Werner Group, which is headed by David Werner and Rubin Schron. The real estate firm purchased the land in 2014 for roughly $270 million, and co-op apartment owners pay ground rent to Werner Group.  The former contract between the co-op and the land’s previous owner, in the lease set to expire in March 2025, calculated that ground rent be just $53.4 million using a formula for determining the annual rent. Based on Werner’s more recent purchase price that annual rent should automatically be much higher though, the new owners said.  To the ire of the residents, the board agreed to the new higher price.

Lawyer Massimo F. D’Angelo and several other attorneys involved in the lawsuit are claiming that JM Zell was hired to negotiate better terms with Werner but instead agreed to the high-priced offer. The board thus “became a willing participant in Werner’s scheme” to force residents to pay “exorbitant additional sums” to keep their apartments.  As a result, shareholders “live in a perpetual state of fear that they will be uprooted from their homes,” the suit claims.

The lawsuit’s outcome will depend upon how court deems that the land should be valued.  If the current homeowners aren’t able to pay the higher bills and don’t find an agreement in court, Werner will be free to build a new tower on the site—perhaps something more like its neighboring 1,550-foot-tall Central Park Tower or 111 W. 57th St– each of which have units for sale asking $30 million.

The board’s lawyer, Laurence S. Tauber of Cohen Tauber Spievack & Wagner, told The Post: “The board believes the allegations [in the suit] are baseless and without foundation and it will vigorously defend them. They are confident they’ll be successful