10 Facts to Know About the Month of Av

Teshuvah:  Move Forward, Don’t Dwell on the Past

The Rebbe and the General – Yom Kippur Remembrances

Fish and Fall Fruits to Break the Yom Kippur Fast

The 11th month of the Jewish year (counting from Tishrei) is also referred to as “Menachem Av.” “Menachem” means “consoler,” and “Av” means “father.” Due to the tragic events that occurred during this month, its name reminds us that G d is there to comfort us in times of tragedy.

The first nine days of Av are a period of mourning. We refrain from eating meat and drinking wine, except on Shabbat and on celebrations, such as a bar mitzvah, a brit (circumcision) or the completion of a tractate of the Talmud.

We also refrain from washing clothing (except for those of a baby) and wearing freshly washed clothing, swimming and bathing for pleasure, and remodeling a home. We avoid unnecessary travel, and postpone the sanctification of the moon and celebrating a couple’s engagement until after Tisha B’Av.

On a spiritual level, we also take time to increase mitzvah observance and our performance of kind deeds to improve the world.

The 5th of Av is the yahrtzeit of Rabbi Isaac Luria Ashkenazi, known as Ari HaKadosh (“The Holy Lion”), who passed away in the Jewish year 5332 (1572 CE). Born in Jerusalem in 1534, he spent many years in secluded study near Cairo, Egypt, and moved to Safed in 1570, where he died two years later at age 38. The Ari, who is regarded as one of the most prominent figures in Jewish mysticism, made the study of Kabbalah mainstream.

On the 9th of Av, we commemorate several tragedies, among them: The Jews who left Egypt with Moses were condemned to wander and die in the desert for 40 years; the destruction of both Holy Temples by the Babylonians in 423 BCE and by the Romans in 69 CE; and the Jews of Betar who were killed. 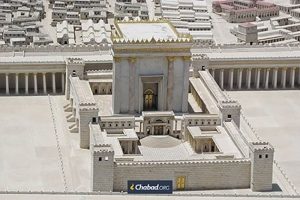 The day is commemorated as a day of fasting and mourning.

“Shabbat Chazon” is translated to “Shabbat of the Vision.” On this Shabbat, the reading from the Prophets begins with the words “Chazon Yeshayahu,” the vision of Isaiah, regarding the destruction of the Holy Temple. In Chassidic teachings, we learn that every Jewish soul is shown a vision of the third Holy Temple, inspiring us to do mitzvot to turn this vision into reality.

In the book of Lamentations, the prophet Jeremiah recorded the imminent destruction of the First Temple and the exile of the Jewish people.

G d instructed Jeremiah to write down the words. He spoke about Israel and Judah in order to warn the house of Judah about tragedies that would occur if they did not repent. Jeremiah, imprisoned at the time, dictated three chapters to his student, Baruch ben Neriah, who wrote down the impending tragedies in past tense, as though they had already occurred. Per Jeremiah’s instruction, Baruch read the scroll to the Jewish people, who had gathered at the Temple. Rashi relates that the scroll was read before King Jehoiakim, who, after hearing just a few verses, threw the scroll into the fireplace.

As Jeremiah prophesied, on the 9th of Av, the Temple were destroyed and the Jews were led into captivity. Ever since this tragedy, we read the book of Lamentations on the eve of the 9th of Av.

This day, Tu B’Av, signifies rebirth after destruction and is a day for new beginnings. On this day, the daughters of Jerusalem would borrow linen garments in order not to embarrass others who did not have beautiful clothing and dance in the vineyards to find prospective grooms.

The Talmud considers this day the greatest festival of the year, followed by Yom Kippur, as its essence represents the future redemption.

The 20th of Av marks the yahrtzeit of the Lubavitcher Rebbe’s father, Rabbi Levi Yitzchak Schneerson (1878-1944), in Alma Ata, Kazakhstan. Rabbi Levi Yitzchak was Chief Rabbi of Yekaterinoslav (currently Dnipro, Ukraine), and was arrested and exiled to Kazakhstan by the Stalinist regime as a result of his work to preserve Jewish life in the Soviet Union.

Rabbi Levi Yitzchak Schneerson was born in 1878, on the 18th of Nissan, in the town of Podrovnah (near Gomel), to Rabbi Baruch Schneur and Rebbetzin Zelda Rachel Schneerson. Rabbi Levi Yitzchak was the oldest of four children: two brothers, Rabbi Shmuel and Rabbi Shalom Shlomo, and one sister, Rebbetzin Rada Sima. His father, Rabbi Baruch Schneur, was a great-grandson of the third Lubavitcher Rebbe, Rabbi Menachem Mendel Schneerson, known as the Tzemach Tzedek.

As a small child, Rabbi Levi Yitzchak showed signs of being a prodigy, as the Rebbe Rayatz, the sixth Lubavitcher Rebbe, would later write, “Already from a young age, his extraordinary talents were discovered.” He mastered Kabbalah, Talmud, and Chassidic philosophy and was ordained by the leading Torah authorities of his time, Rabbi Chaim Soloveitchik of Brisk and Rabbi Eliyahu Chaim Meizel of Lodz.

In 1900, at the age of 22, Rabbi Levi Yitzchak, who had already become renowned as a Kabbalistic and halachic scholar, married Rebbetzin Chana Yanovsky. The daughter of Rabbi Meir Shlomo Yanovsky, the Rabbi of Nikolayev and chassid of the Rebbe Maharash, the fourth Lubavitcher Rebbe, young Rebbetzin Chana was known as a scholar in her own right. Rabbi Shalom DovBer Schneerson, the fifth Lubavitcher Rebbe, had suggested the match. The wedding took place on the 11th of Sivan, in Nikolayev, where Rabbi Levi Yitzchak and Rebbetzin Chana would remain for almost a decade. (Chabad.org)

Dina Zirkind received her B.A. in English from the University of Pennsylvania. She enjoys combining her interest in journalism with her passion for sharing Jewish wisdom. Dina currently lives on the Upper West Side in Manhattan with her husband.