Victims of Surfside collapse remembered at site where tower once stood

(AP) — A year ago in the middle of the night, a 12-story oceanfront condo building in Surfside, Florida, came down with a thunderous roar, leaving a giant pile of rubble and claiming 98 lives — one of the deadliest structure collapses in US history.

The names of each victim were read aloud during a ceremony Friday to mark the somber anniversary, attended by political figures, first responders and family members of those who died at Champlain Towers South on June 24, 2021.

“Exactly 365 days ago, my house imploded, my home collapsed with everything and everyone inside but… I am alive, and I have the chance to rediscover something that motivates me to smile again, to fight, to be a whole person,” said Raquel Oliveira, whose husband and 5-year-old son died in the collapse.

The disaster was the largest non-hurricane emergency response in Florida history. It drew rescue crews from across the US and as far away as Israel to help local teams dig through the pile and search for victims. Representatives of the Israel Defense Force’s Home Front Command attended the ceremony.

They were honored Friday for their difficult work.

“Your dedication and selflessness were on display for the entire world,” said Miami-Dade County Mayor Daniella Levine Cava. “Thank you for your heroic efforts.” 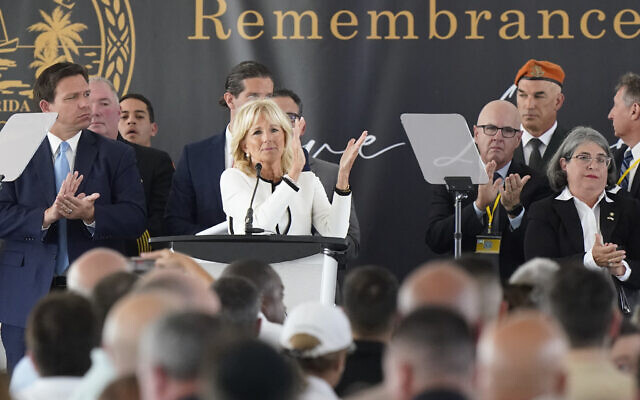 First lady Jill Biden, center, leads a round of applause for first responders during a remembrance event at the site of the Champlain Towers South building collapse, Friday, June 24, 2022, in Surfside, Fla, including a representative of the IDF Home Front Command, standing back right in an orange beret. (AP Photo/Wilfredo Lee)

Before the public ceremony organized by the town of Surfside, there was a private torch-lighting gathering at the time — about 1:25 a.m. — when the 136-unit condominium fell a year ago.

“We stand by you today and always,” Biden said during comments briefly interrupted by a standing ovation when she mentioned the firefighters “who spent weeks working to recover your loved ones.”

“If there is something strong enough to help us carry this burden of grief forward, something to break its gravitational pull, it’s love,” Biden said.

DeSantis, a Republican, recalled how he was awakened at 3 a.m. the day the building fell and slowly realized the immense scope of the disaster as he traveled to Surfside. He thanked first responders and noted that the state budget he recently signed contains $1 million for a memorial to the 98 people lost.

“We are not going to forget what they meant to this community,” the governor said.

There was an effort by many victims and family members to install a memorial at the site where the building once stood, but the land is being sold for $120 million to a Dubai developer and a memorial will likely be created nearby.

Only two teenagers and a woman survived the collapse, while others escaped from the portion of the building that initially remained standing.

Images of one survivor’s rescue traveled widely, offering a glimmer of hope right after the collapse, but the long, grueling search produced mostly devastating results as families waited only to learn about the remains of their loved ones. 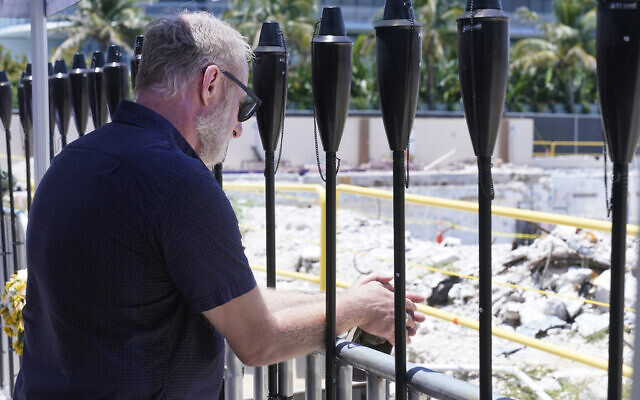 An attendee at a remembrance event at the site of the Champlain Towers South building collapse takes a moment as he looks out at the area where the building once stood, Friday, June 24, 2022, in Surfside, Fla. (AP/Wilfredo Lee)

Those missing in the collapse included the 7-year-old daughter of a firefighter who helped in the search, later found dead with her mother, aunt and grandparents; a woman whose cries for help were heard in the early hours but suddenly stopped; and two sisters, 4 and 11, pulled from the rubble, who were so tiny they were buried in the same casket.

The victims included local residents as well as visitors who were Orthodox Jews, Latin Americans, Israelis, Europeans and snowbirds from the Northeast.

The cause of the collapse remains under investigation by the National Institute of Standards and Technology, with the probe entering a new phase this month to cut and drill into concrete and steel. Champlain Towers South had a long history of maintenance problems, and shoddy construction techniques were used in the early 1980s. Other possible factors include sea level rise caused by climate change and damage caused by saltwater intrusion.

Pablo Langesfeld, the father of a 26-year-old lawyer who had married and moved to the building a few months before the collapse, said that for him closure will not come until that investigation is completed. 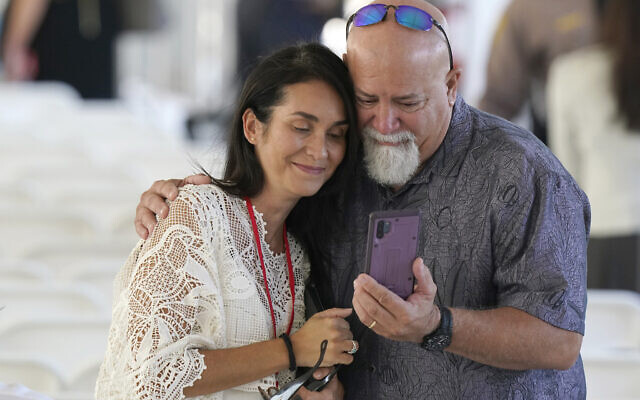 Two attendees gather around a phone before the start of a remembrance event at the site of the Champlain Towers South building collapse, Friday, June 24, 2022, in Surfside, Fla. (AP Photo/Wilfredo Lee)

“This is a nightmare that never ends,” Langesfeld told The Associated Press.

Although the investigation is expected to take years, a judge approved a compensation settlement topping $1 billion Thursday for the victims.

Miami-Dade Circuit Judge Michael Hanzman praised the dozens of lawyers involved, and a woman who lost her daughter called them heroes in black robes and business suits.

Hanzman said the compensation deal was extraordinary in its scope and speed. Checks for victims could begin going out in September.

“This settlement is the best we can do. It’s a remarkable result,” he said.

Still, the wounds are still fresh for the hundreds of people who lost loved ones a year ago.

“Our family lost everything,” said Kevin Spiegel, whose wife Judy died while he was traveling on business. “One year later, time has not healed my broken heart.”

ToI Staff contributed to this report