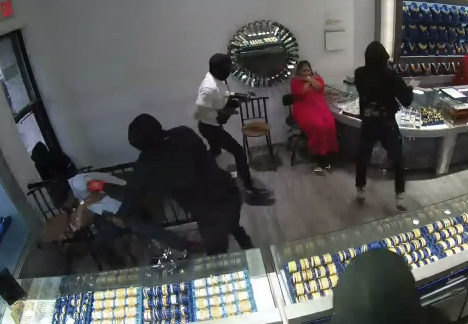 If the escalation in crime has not been bad enough to shock you, then this one will send shivers down your spine.

As was reported by the New York Post, eight masked armed robbers dressed in hoodies and dark clothing rampaged through a jewelry store in New Jersey and made off with over $1 million in items in approximately 60 seconds.

Surveillance video shows the robbers spent about one minute in the store.

The robbery occurred around 7:45 p.m. on Friday night when the robbers followed an employee through the front door of Virani Jewelers on Oak Tree Road in the Iselin section of Woodbridge, police said.

NJ.com reported that Chief Law Enforcement Officer Scott Kuzma said on Monday that the robbers forced workers to the floor before they smashed glass display cases, swiped jewelry and ran out of the store.

The shocking video of the robbery shows one of the gunmen hopping a display case as the others yell for the employees to drop to the floor.

The Post reported that one of the suspects is seen on the video pointing a gun at an employee sitting near the entrance and appears to viciously assault him before the man gets on the ground. The footage also shows the other robbers getting to the task at hand at blinding speed as they used a hammer to shatter the display cases and fill up bags full of merchandise as a woman lies on the ground motionless, as was reported by the New York Post.

The Post also reported that one of the robbers “takes full trays of items and strolls casually out of the store, passing a cohort who is keeping guard at the door. The other suspects follow shortly after in a sprint, with the whole thing over in about a minute.”

Speaking to ABC7NewYork, a local resident, Misbah Chaudhry said, “How comfortable and confident they were. They came in like they owned the store, they’re like, ‘All right, everybody down,’ breaking stuff, filling up their bags, walking away like they had no worries in the world.”

Despite the fact that several of the jewelry stores employees were injured in the smash-and-grab robbery, none of the injuries were of a serious nature.

Kumza said that the value of the jewelry stolen has yet to be determined.

Surveillance video shows the robbers spent about one minute in the store.

The Woodbridge Police Department is asking people with information to contact detectives at (732) 624-7700, according to ABC.