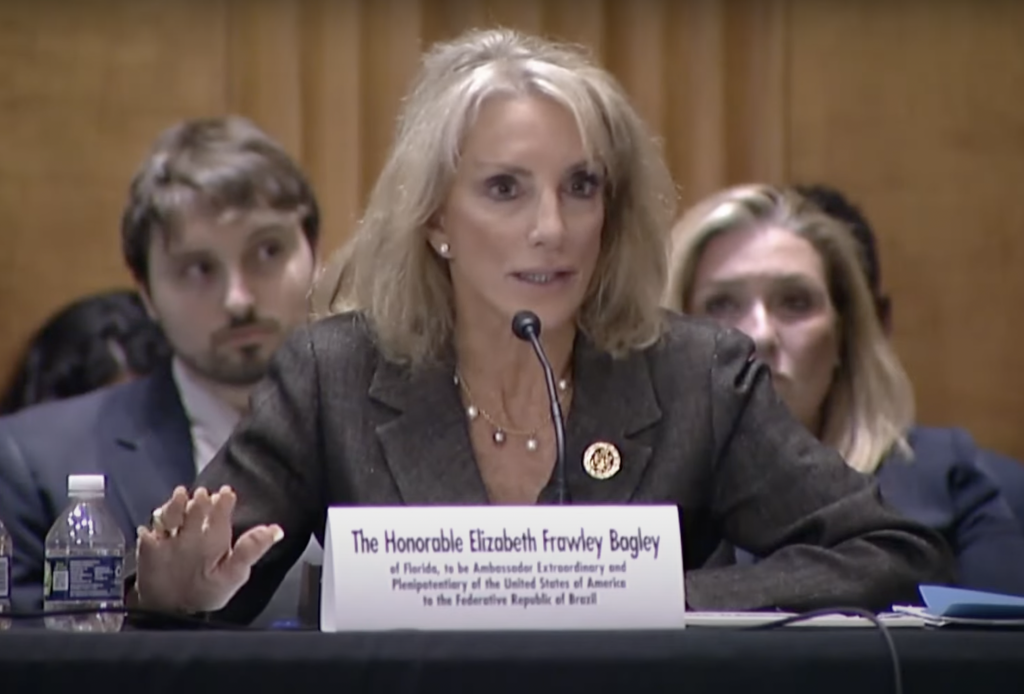 Jewish and pro-Israel organizations across the political spectrum are calling on the White House to withdraw the nomination of an ambassadorial candidate who is under fire for anti-Semitic remarks.

Elizabeth Frawley Bagley, a longtime diplomat and Democratic Party insider who was tapped to serve as the next ambassador to Brazil, is facing widespread opposition after the Washington Free Beacon reported on her 1998 remarks about the “Jewish lobby” and its “major money.”

Pressure is mounting on the Biden administration to pull the nomination and replace Bagley with a different candidate. The White House would not comment on the controversy when contacted by the Free Beacon, and the State Department’s special envoy to monitor and combat anti-Semitism—a position created to fight against the type of rhetoric employed by Bagley—also would not comment. Jewish and pro-Israel organizations say Bagley must go as a result of her remarks, in which she decried “the influence of the Jewish lobby because there is major money involved.”

“It is unconscionable to persist with this nomination,” Sandra Parker, chair of the Christians United for Israel’s action fund, told the Free Beacon. “It’s clear as day that Ms. Bagley’s anti-Semitic remarks disqualify her for any post in government, let alone a U.S. ambassadorship. Her statements run contrary to the Biden administration’s commitment to fighting ant-Semitism. They should acknowledge this and pull her nomination without delay.”

Bagley’s future is uncertain after the Senate Foreign Relations Committee did not advance her nomination, primarily due to opposition over her comments claiming the “Jewish lobby” exerts undue influence over politics. Bagley’s confirmation by the full Senate will require her to clear additional parliamentary hurdles and votes, though it seems increasingly likely Republicans will not support these moves.

The American Israel Public Affairs Committee (AIPAC), the nation’s most prominent pro-Israel lobbying group, also condemned Bagley’s comments in a rare rebuke. While AIPAC, which values its bipartisan credentials, typically shuns political fights, a spokesman for the group said that Bagley’s “bigoted comments must be rejected.”

In her 1998 comments, Bagley appeared to be referring to AIPAC and other similar groups when she claimed, “The Democrats always tend to go with the Jewish constituency on Israel and say stupid things, like moving the capital to Jerusalem always comes up.” Support for Israel-related issues, Bagley added, are mainly due to “the Jewish factor, it’s money.”

The Republican Jewish Coalition (RJC) also pressed the White House to pull Bagley’s nomination and urged the Senate to reject her if it does not.

“The revelation of not one but a few anti-Semitic tropes that Bagley expressed in a previous interview should not be trivialized and dismissed in effort to move this ill-fated nomination forward,” Liora Rez, the organization’s executive director, told the Free Beacon. “If discriminatory comments had been made about any other minority, Bagley’s nomination would not have seen sunlight. Anti-Semitism has no place in America, especially not among politically appointed leaders.”

The Simon Wiesenthal Center, a watchdog group that combats anti-Semitism, demanded the nomination be killed, saying, Bagley “must remove herself from consideration to represent the American people in Brazil. If she doesn’t, the president or secretary of state should.”

Rep. Lee Zeldin (R., N.Y.), a member of the House Foreign Affairs Committee and one of two Jewish Republicans in Congress, said Bagley’s comments should disqualify her from even a low-level job “pushing papers at the State Department.”

“Slamming ‘Jewish money’ in politics is one of the oldest, most dishonest and blatantly antisemitic tools of far-left activists and politicians, such as Ilhan Omar, to shame and undermine U.S. support for Israel,” said Zeldin. “Ms. Bagley’s dismissive and flagrantly anti-Semitic and anti-Israel comments should disqualify her from pushing papers at the State Department, much less being the face of a U.S. diplomatic mission.”