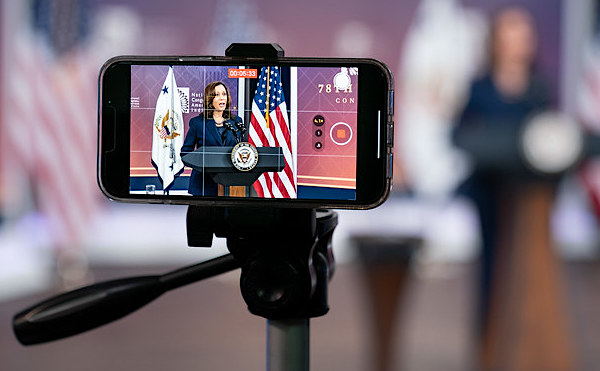 Senator to Apple: Why are you aiding China’s crackdown on protesters?

Joe Biden has been successful in keeping his approval rating out of the 20% margins. Barely, as polls frequently have put him into the 30s.

Kamala Harris, as vice president, has been getting approval ratings even lower than Biden’s, dipping occasionally into the 20s.

But perhaps one of the clearest confirmations of her vast talent for unpopularity came this week with word that the Democratic National Committee reportedly is slashing the price for a fundraising photo fans could buy of themselves and Harris by $10,000.

On social media there were those who said the price still was way out of line.

The New York Post said the price for taking a photo with Harris at last month’s DNC’s Women’s Leadership Forum was to be $15,000.

But then the events were postponed, and now, the report said, “The DNC is said to have dropped the price per photo by 60% for the veep’s California fundraiser later this month.”

Among Twitter social media comments were those that said actually, the VP would have to pay them to pose with her.

“Wonder what they could draw if she promised to not show up?” Twitter user @NoleAmerica tweeted.

The DNC wouldn’t answer The Post’s questions about the slashed prices Tuesday — or the reason behind postponing Harris’ fundraising event last month, the Post reported.

The political group said, “The DNC works with our hosts and fundraisers to set specific ticket prices for each event. As has always been the case, there are a variety of ticket levels for every event as is pretty standard for finance events.”

The Free Beacon said the event itself had been postponed because of “miserly ticket sales.”

“Harris’s unpopularity has left her party in a panic, the Washington Free Beacon reported in May. At least 12 staffers, including her chief of staff, have left her office. Multiple former staffers describe the vice president as so ‘toxic’ and ‘abusive’ that they are ‘terrified at the thought of her becoming president,’” the publication reported.