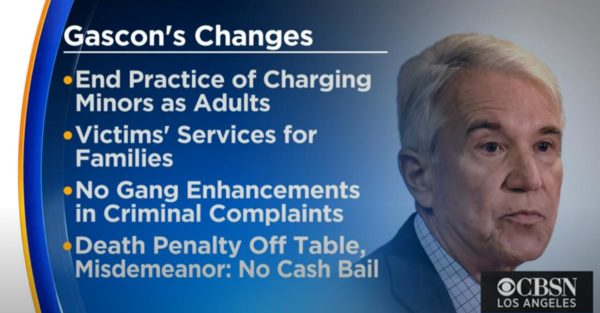 Los Angeles County District Attorney George Gascón is being blamed after two local police officers were murdered on Tuesday night by a convict who was free after a lenient plea bargain and allegedly violated his parole by carrying a gun.

Local Fox affiliate KTTV-11 reported Tuesday that two officers from the town of El Monte, California, in Los Angeles County, were shot after responding to an emergency call at a motel:

The El Monte Police Department responded to a call of a possible stabbing at a motel near Garvey and Central avenues Monday evening. Upon arrival, a gunman opened fire at the responding officers, El Monte city officials said in a press release.

Two of the officers – Corporal Michael Paredes and Officer Joseph Santana – were hit in the shooting and were taken to LAC-USC Medical Center. Medical personnel did everything they could to revive the officers. However, both Paredes and Santana were later pronounced dead at the hospital.

[The gunman] has since been identified as 35-year-old Justin Flores. Officials said Flores was due in court on June 27 for a probation violation. The day before the shooting, Flores’ probation officer filed a request with LA County Superior Court for a revocation hearing, due to a possible probation violation when a woman reported he had assaulted her.

Reporter Bill Melugin of the Fox News Channel then reported that Flores was on probation for a previous conviction for unlawful possession of a firearm by a felon, after receiving the “bare minimum” sentence under a plea deal with Gascón.

Gascón issued a statement offering “heartfelt condolences” after the murders.

Critics were outraged, and blamed him for the deaths, according to the New York Post.

Gascón was elected in 2020 with the help of millions of dollars in spending by left-wing billionaire George Soros, who has spent at least $40 million to elect left-wing prosecutors nationwide to pursue the Black Lives Matter “reform” agenda.

He now faces a recall effort that reached the threshold number of signatures Wednesday for triggering a recall vote. The campaign to recall him will continue gathering additional signatures until the July 6 deadline, as insurance against the likelihood that some signatures may be mistaken or invalid.

Joel B. Pollak is Senior Editor-at-Large at Breitbart News and the host of Breitbart News Sunday on Sirius XM Patriot on Sunday evenings from 7 p.m. to 10 p.m. ET (4 p.m. to 7 p.m. PT). He is the author of the recent e-book, Neither Free nor Fair: The 2020 U.S. Presidential Election. His recent book, RED NOVEMBER, tells the story of the 2020 Democratic presidential primary from a conservative perspective. He is a winner of the 2018 Robert Novak Journalism Alumni Fellowship. Follow him on Twitter at @joelpollak.