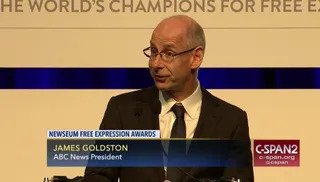 House Democrats have hired James Goldston, a former ABC News executive, to advise them as they prepare to host what they hope will be made-for-primetime TV hearings to convince Americans that Donald Trump attempted an insurrection on January 6, 2021.

Goldston, who left ABC News in 2021, was president of the network during several scandals, including the alleged cover-up of a story on Jeffrey Epstein, a convicted sex offender who was accused of trafficking and assaulting minors and later died under suspicious circumstances in prison, of an alleged suicide.

In 2019, Project Veritas obtained and aired a video of then-ABC News anchor, Amy Robach, expressing frustration that the network refused to publish her 2015 interview with Virginia Giuffre, who accused Epstein and Prince Andrew of sexual misconduct.

“I’ve had this story for three years. I’ve had this interview with Virginia Roberts,” Robach complained in the off-air recording.

“We would not put it on the air. First of all, I was told, ‘Who’s Jeffrey Epstein? No one knows who that is. This is a stupid story.’ Then the palace found out that we had her whole allegations about Prince Andrew and threatened us a million different ways. We were so afraid that we wouldn’t be able to interview Kate and Will. That also quashed the story…. It was unbelievable what we had. [Bill] Clinton — we had everything. I tried for three years to get it on to no avail and now it’s all coming out and it’s like these new revelations. And I freaking had all of it. I’m so pissed right now. Every day I get more and more pissed…. What we had was unreal,” Robach added.

Robach also said in the video that she believed Epstein’s death was murder, not due to suicide.

“Do I think he was killed? Hundred percent, yes, I do,” she says. “He made his whole living blackmailing people. There were a lot of men on those planes. A lot of men who visited that island. A lot of powerful men who came into that apartment.”

Golston was ABC News president from 2014 through 2021. ABC News is owned by Disney.

House Minority Leader Kevin McCarthy (R) sent Golston a letter with follow-up questions about Robach allegations and why the network quashed the story – which could have prevented further assaults if published earlier.

While Golston may have helped bury a story on Epstein, Democrats are hoping he can turn January 6 into a “blockbuster investigative special,” according to Axios.

Axios reported: “He plans to make it raw enough so that skeptical journalists will find the material fresh, and chew over the disclosures in future coverage. And he wants it to draw the eyeballs of Americans who haven’t followed the ins and outs of the Capitol riot probe.”

Golston will be building a narrative basic on a mix of interviews, both live and pre-produced video, according to the outlet.

The first hearing will air on Thursday at 8 p.m. Eastern.