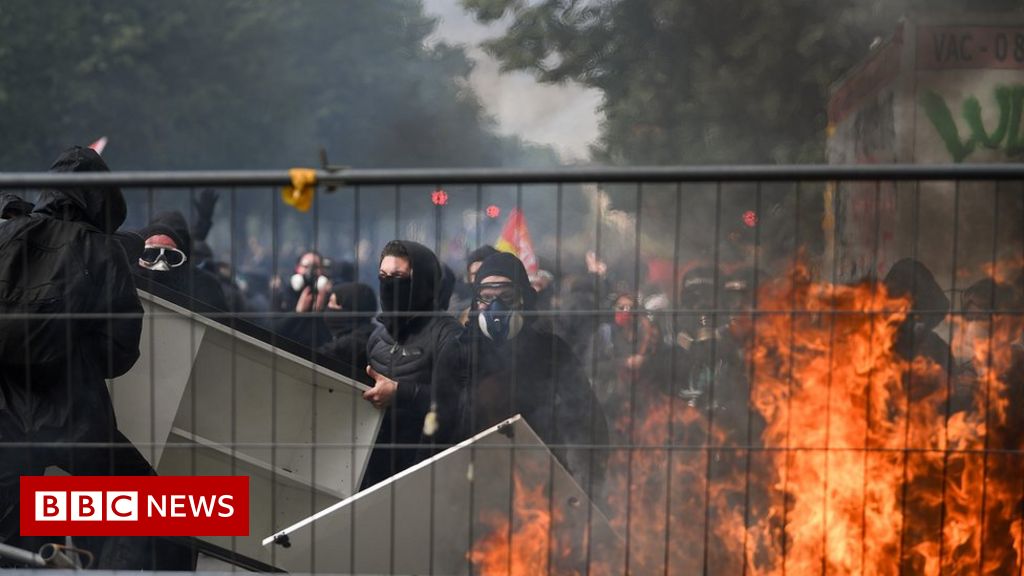 JACK MONTGOMERY(Breitbart) Left-wing activists embarked on their now-annual May Day (Labour Day) riots in Paris, France, on Sunday, with the day’s violence tinged with anti-Emmanuel Macron sentiment in the wake of his recent re-election.

The annual protest, which featured placards reading ‘Macron, Get Out’ and banners emblazoned with the faces of Communist mass murderers including Vladimir Lenin, Joseph Stalin, and Mao Zedong, once again included a violent element, with activists lighting fires, throwing missiles at police, and smashing up street-facing businesses.

Some firemen attempting to put out blazes were tackled by rioters trying to stop them, while some rioters were hit with police tear gas.

As of the time of publication, reports say eight law enforcement officers have been injured and 45 rioters arrested — although this figure could change as the day unfolds.

“The thugs come to disrupt the May Day demonstrations, particularly in Paris, by committing unacceptable violence,” commented Gérald Darmanin, the Minister of the Interior.

“I follow this carefully. Full support for the mobilised police and gendarmes, guarantors of the freedom to demonstrate and public order,” he added.

Far-left political leader Jean-Luc Mélenchon, who placed third in the first round of the recent French presidential elections with over a fifth of the vote, blamed the police for the violence.

“The parasitic violence of May 1st makes the march of the [trades] unions invisible and serves as propaganda for our worst adversaries,” he said.

“Fed up. The prefect of police knew. Unable to guarantee the right to demonstrate in peace,” he complained.