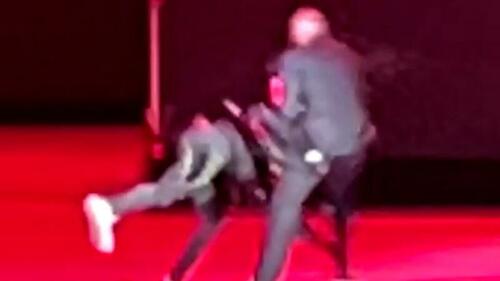 (TJV NEWS) Comedian Dave Chappelle was tackled on stage Tuesday by a man who was reportedly armed with a knife disguised as a replica gun  Chappelle was not harmed during the incident and later joked that it “was a trans man” who rushed the stage.

Cops in Los Angeles have identified the suspect as Isaiah Lee, 23, who is being charged with felony assault with a deadly weapon. Lee was taken to the hospital before he was booked early Wednesday into jail on $30,000 bail, the Los Angeles Police Department said.

Los Angeles police told ABC7 News that there was “an incident at the Hollywood Bowl around 10:45 PM and a man who was reportedly armed with a gun and a knife was taken into custody.”

The idiot getting beaten down after attacking Dave Chappelle at Hollywood Bowl pic.twitter.com/Ft0FIUyjWv

Man That Attacked Dave Chappelle At His Show At Hollywood Bowl Has Hands Broken and Dislocated pic.twitter.com/ZvPgjdV5gz

Chappelle told the audience “I don’t know if that was part of the show or… I grabbed the back of that n****s head, his hair was spongy, absorbant.”

He then joked that it was a “trans man”:

Someone just ran on stage and attacked Dave Chappelle 😮 at the Hollywood Bowl in Los Angeles #netflixisajokefest #netflixisajoke pic.twitter.com/0WMUPQ7ks4