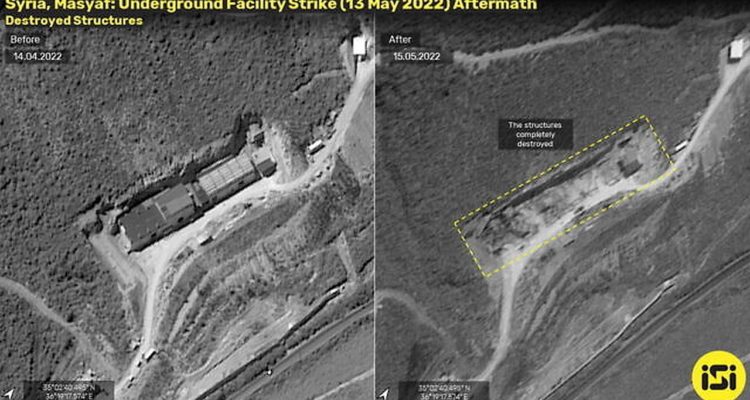 According to foreign reports, this was the third aerial attack in the last three weeks to stop Iranian entrenchment in the country.

Israeli intelligence firm ImageSat International (ISI) released “before” and “after” pictures in which several buildings in a row in the northwestern region of Masyaf are utterly demolished.

“The structures were used as an entrance to underground tunnels. ISI has detected that the structures have been completely destroyed,” the company said.

According to ISI, “this underground facility is related to” the nearby Scientific Studies and Research Center (SSRC), which Western intelligence sources believe is linked to the Syrian military. The SSRC is responsible for the research and development of biological and chemical weapons, and nuclear and ballistic missile-related technology.

In 2005, the SSRC was put on the U.S. Treasury Department’s Specially Designated Nationals list and American citizens and residents were prohibited from doing business with it.

The alleged Israeli strike is the second one in the Masyaf region in two months. The area has been attacked several times over recent years, as it contains several Iranian bases that are used, among other purposes, to develop and produce more accurate missiles that could endanger the Jewish state.

Israel has described its ongoing but usually uncredited military activity as a “war between the wars” to discourage Iranian entrenchment so close to its northern border.

Just five days ago, Syrian state television reported that the IDF had launched several shells at an observation post overlooking the Golan Heights. Although officially belonging to the Syrian army, the post was reportedly suspected of being used by Hezbollah terrorists and members of the Iranian Islamic Revolutionary Guards Corps.

Less than three weeks ago, the Syrian army admitted that four of its soldiers were killed in an Israeli air strike on Damascus while claiming that its forces had managed to shoot down most of the “Tiberius-based” missiles. The opposition Syrian Observatory for Human Rights SOHR reported, in contrast ,that those killed included five Syrian soldiers and four people of unknown citizenship who were affiliated with Iran-backed militias.

According to Saudi Arabian news channel Al-Hadath, that attack targeted a weapons shipment for Hezbollah at the airport south of the capital. SOHR said Syrian army and Iranian weapons storage facilities were hit. (WorldIsraelNews.com)