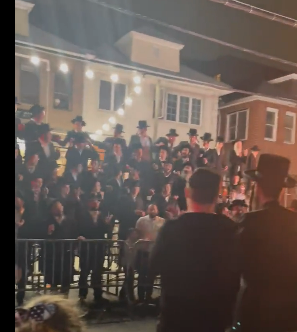 On Wednesday evening, Jews around the world celebrated Lag B’Omer (the 33rd day of the Omer) signifying the day that the plague that killed the students of Rabbi Akiva ceased. Lag B’Omer is also the yahrzeit of the great Torah scholar and author of the Zohar, Rabbi Shimon Bar Yochai.

Every year on Lag BaOmer (18 Iyar), we remember the great and holy Tanna (Mishnaic sage) Rabbi Shimon bar Yochai, who died on this day about eighteen centuries ago. To this day, pious Jews make an annual pilgrimage to Kefar Meron, in the Land of Israel, to pray at the tomb of this great and holy scholar.

When Shimon was a young boy, he studied in the great academy of the scholars of Yavneh, founded by Rabbi Yochanan ben Zakkai, who died just about the time that Shimon was born. Shimon’s principal teacher was the famous Rabbi Akiva, who had his academy at Benei Berak. So attached did Shimon become to his master, Rabbi Akiva, that the latter called him “my son.”

During the cruel persecution by the Roman Emperor Hadrian, when the Talmudic Academies were shut down and the study of the Talmud was forbidden on penalty of death, Rabbi Akiva continued to teach the Talmud publicly, and his devoted pupil Shimon stayed at his side, until Rabbi Akiva was arrested. Even then, Shimon continued to visit his master in prison to receive instruction there. Only death finally separated them, for Rabbi Akiva was condemned to die a martyr’s death for Kiddush Hashem (the sanctification of G d’s name).

Becoming a Rabbi Under Roman Rule

Those were very difficult times for the Jewish people in the Land of Israel under the brutal persecution of the Roman Emperor Hadrian. It was particularly difficult for the sages to study the Talmud and to conduct schools. On penalty of death, it was also forbidden to ordain students of the Talmud. Both the ordaining Sage and the ordained scholar were put to death if caught. The entire Jewish religious life was in danger, until the great Rabbi Yehudah ben Baba publicly ordained five famous scholars, defying Hadrian’s cruel decree. Rabbi Shimon was one of these five scholars. (Rabbi Meir was another one.) The Roman authorities were soon after these dauntless Jewish champions. The ordained scholars escaped, but Rabbi Yehudah ben Baba was caught and put to death.

Finally, the cruel Hadrian died in great pain, and his decrees were no longer enforced with the same brutality as before. Then the leading sages of that time gathered to consider ways and means of restoring Jewish religious life. Among the leading sages gathered at Usha, we find Rabbi Shimon again. For reasons of safety, the sages moved to Yavneh, where they sat in conference in a vineyard. The leading sages were Rabbi Yehudah, Rabbi Yosei the Galilite, and Rabbi Shimon bar Yochai. Discussing what attitude to take towards the Roman government, Rabbi Yehudah suggested a friendly one, Rabbi Yose expressed no opinion, while Rabbi Shimon spoke very bitterly of the Roman tyrants, and advocated every possible defiance. For Rabbi Shimon could never forget the terrible sight of his beloved master and teacher, Rabbi Akiva, being tortured to death by the Roman executioners. The sages were not aware that their conversation was overheard by a certain young man, Judah ben Gerim. At one time a disciple of Rabbi Shimon, Judah ben Gerim later turned spy for the Roman authorities. This treacherous man reported the conversation of the sages to the Roman authorities. At once they decreed honor and rank for Rabbi Yehudah for speaking favorably of them, exile for Rabbi Yosei for failing to do so, and death for Rabbi Shimon, who dared to challenge them.

Rabbi Shimon fled for his life together with his son Rabbi Elazar. For some time they stayed in hiding in the Bet Hamedrash (academy), where Rabbi Shimon’s wife brought them bread and water daily. When the search was intensified, they decided to seek a better hiding place. Without telling anyone of their whereabouts, they hid in a cave. G d caused a carob tree to spring up at the entrance to the cave, as well as a spring of fresh water. For twelve years, Rabbi Shimon bar Yochai and his son Elazar dwelt in the cave, sustaining themselves on carobs and water. During the time, they studied and prayed until they became the holiest sages of their day.

At the end of twelve years, the Prophet Elijah brought them the good tidings of a change in the government and a reprieve. Father and son now left the cave. Passing a field where they saw Jewish farmers toiling on the land, they said, “Imagine people giving up the sacred study of the Torah for worldly matters!”

No sooner did they utter these words, than all the produce of the field went up in smoke. Then they heard a heavenly voice saying, “Have you come out to destroy My world? Go back to your cave!” They returned to the cave for another twelve months, and left it again, only after they heard the same heavenly voice calling them to leave.

This time, they came out with a different outlook on life. Seeing a Jew carrying two bunches of myrtle, rushing home on Friday afternoon, they asked him what he was going to do with the myrtle.

“It is to adorn my house in honor of the Shabbat,” the man replied.

“Would not one bunch of myrtle be sufficient to fill your house with fragrance?” they asked.

The stranger replied, “I am taking two bunches, one for ‘Remember the Shabbat day’ and the other for ‘Keep the Shabbat Day holy.’”

Said Rabbi Shimon to his son, “See how precious the precepts are to our brethren!”

Satisfied that despite all the decrees and persecutions of the cruel Roman rulers, the Jews still clung to the commandments and especially Shabbat observance, Rabbi Shimon and his son felt greatly encouraged.

Proceeding on their way, they met Rabbi Pinchas ben Yair, another famous scholar about whom there are so many wondrous tales in the Talmud. Rabbi Pinchas ben Yair was Rabbi Shimon’s father-in-law, and he came out to meet his in-laws. Seeing the terrible effects of the prolonged cave life upon the health of his son-in-law, Rabbi Pinchas ben Yair burst into tears, but Rabbi Shimon consoled him saying that he could never have attained such a high degree of scholarship and divine wisdom, had he not spent so many years in the cave.

Rabbi Shimon settled in the town of Tekoa, where he founded a great academy. The greatest scholars of the time gathered there to receive instruction from Rabbi Shimon. Among them was Rabbi Yehudah, the son of Rabbi Shimon ben Gamliel, the Nassi, later the compiler of the Mishnah.

The Sages decided to send a delegation to Rome, and chose Rabbi Shimon bar Yochai to head the delegation.

When they came to Rome, they heard that the daughter of the Roman emperor had lost her mind and that no one could cure her. Rabbi Shimon bar Yochai proceeded to the palace and asked for permission to treat the patient. After a few days’ treatment the princess became well. In gratitude, the emperor told Rabbi Shimon that he could choose the most precious thing in his treasury. Rabbi Shimon found there the original decrees of persecution, and claimed them as his reward. Thus he succeeded in bringing great salvation to his people. (Chabad.org)