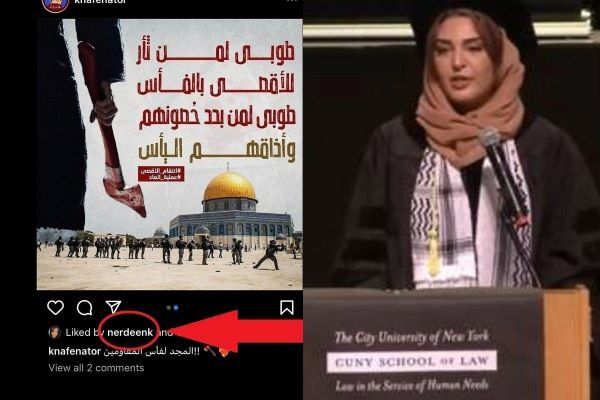 City University of New York is facing a fresh antisemitism controversy after Nerdeen Kiswani, who has a history of incitement and Israel-bashing rhetoric, addressed the School of Law’s commencement ceremony.

Kiswani founded the New York City chapter of Students for Justice in Palestine in 2018, but split with the organization because the radical BDS movement didn’t go far enough for her.

In her May 13 address to the graduates, Kiswani said that she is “facing a campaign of Zionist harassment by well-funded organizations with ties to the Israeli government and military on the basis of my Palestinian identity and organizing.”

She went on to launch Within Our Lifetime, which supports “resistance and return by any means necessary.”

Ilya Bratman, executive director of Hillel at CUNY’s Baruch College told the New York Jewish Week that Kiswani was selected by the School of Law’s student government to speak.

“The president [of the student government] is Jewish,” Bratman said. “But that doesn’t mean anything. The student government is completely intertwined with Kiswani and her efforts to demonize the State of Israel.”
City
Another student told the Jewish Week that Kiswani has created an “unsafe environment” for the CUNY’s 2,000 Jewish students.

“It’s one thing to have a political person who you don’t agree with,” said the student, who asked not to be identified for fear of retribution. “But she calls for the actual murder of Jews. It’s really setting a precedent that CUNY is OK with having people in their school who are out to hurt us.”

Kiswani in Her Own Words and Deeds

According to the watchdog group, Canary Mission, Kiswani has repeatedly commented in speeches and on social media that Israel “has no right to exist” and “must be annihilated.”

• She liked an Instagram post celebrating the murder of three Israelis celebrating Independence Day at a park in Elad in April. The post, which has since been deleted, said “Glory to the axe of resistance.” • At a Land Day rally in New York City in April, she said, “Not just in Gaza or the West Bank or Al Quds [Jerusalem] but in ‘48 [Israel], every inch of Palestine. This is why we chant, ‘we don’t want two states, we want ‘48, we want all of it’ because all of it belongs to us. All of the land.”

• Instagram banned Within Our Lifetime after it posted a collage on International Women’s Day prominently featuring Palestinian terrorists Leila Khaled and Rasmea Odeh.

• A Within Our Lifetime rally in Brooklyn devolved into calls for “globalizing the intifada” and attacking Jews around the world.

• At a 2021, rally, Kiswani was filmed saying in Arabic, “The Gate of Al-Aqsa is made of iron, it can be opened only by martyrs” and “Either we liberate [the Al-Aqsa Mosque] or we die!”

• In a social media stunt in 2020, Kiswani filmed herself holding a cigarette lighter and threatening to light a man’s IDF sweater on fire — while he was still wearing it.

• StopAntisemitism.org named Kiswani its 2020 antisemite of the year.

Kiswani’s commencement address caught the attention of the New York Post. The paper pointed out in a staff-editorial, “Anti-Semitic hate crimes are up 24% in New York (the highest in the nation). And CUNY Law is looking to make it worse, at taxpayer expense.”

CUNY, the largest urban university in the U.S., has been dogged by antisemitic incidents.

In January, the university made headlines when a group of Jewish professors filed a lawsuit to break with CUNY’s faculty union, accusing it of antisemitism.