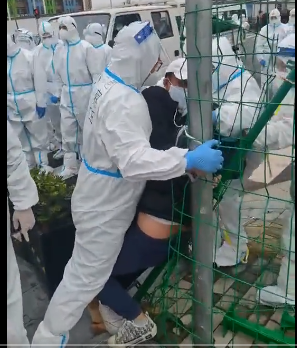 By Jared Evan Videos reportedly posted from Shanghai this week show Chinese police and health officials growing increasingly short-tempered and physical with the city’s 26 million desperate residents, now in the third week of a coronavirus lockdown that was only supposed to last a few days, Breitbart reported.

The government is intent on enforcing a “Zero Covid” policy in China, and Shanghai is under complete lockdown until not a single person tests positive for COVID. All reports indicate, that not a single person has died of COVID in the area, yet the government is not allowing people to even leave their apartments to get fresh air or buy food. The government has been delivering food to residents locked inside their homes but has been allegedly negligent and residents are literally starving.

Individuals who test positive, have been seen dragged off into COVID quarantine camps from their homes. Dogs and Cats are being literally exterminated in the streets if their owners happen to be COVID positive and were forced to quarantine, according to accounts.

Policed by drones that have facial recognition and give orders, the residents are trapped in an Orwellian COVID nightmare.

Videos have been circulating on social media from journalists within the Chinese dissident community. Others appear to have initially surfaced in Chinese social media communications, though the communist regime heavily censors such sites within the country.

A video posted on Thursday obtained by Chinese dissident journalist Jennifer Zeng showed Shanghai police getting physical with citizens crowded outside a quarantine center, leaving some weeping in despair:

Radio Free Asia (RFA) on Thursday posted video of white-gowned police roughly breaking up a protest of residents angry that their community had been rezoned into a quarantine area without warning:

Another video allegedly shot by inmates trapped in a Shanghai high-rise appeared to show a neighbor forcibly subdued and dragged away by quarantine police from his apartment balcony:

Here come the ‘health and safety’ stormtroopers in Shanghai. It’s for your own good, apparently. pic.twitter.com/OL0IT5GxvM

Another video allegedly showing an ugly encounter with Shanghai’s white-garbed lockdown enforcers aboard a Shanghai bus went viral on Thursday because of what a finger-wagging police officer can be heard yelling at people resisting forced eviction from their homes: “This is caused by the international situation! If you continue to make trouble like this, there is no hope for us in China! It’s going to be a war with America, you know! Only the Communist Party can save China now!”

“What is happening in #Shanghai is the result of the international situation. We are going to have a war with the #US.” Can you work out the logic behind the police officer’s words? I can’t. 原來 #上海 的一切都是國際形勢造成的。「要跟美國打仗了！」#CCPChina #CCPvirus #COVID19 pic.twitter.com/48fG7uwSK0

This clip is very terrible, not just bc of the violence of the armed forces as we all know

The woman kept asking why to arrest her, at about 50 seconds, the armed forces gave a startling answer: “Bc we are going to war against America”#Shanghai pic.twitter.com/4oJqHl1tel

A viral video, allegedly filmed by numerous residents of a Shanghai neighborhood from their balconies, in which a pandemic worker in a white biohazard suit beats a howling corgi to death with a spade, leaves the dog lying in the street for a while, then returns to stuff the body into a plastic bag.

A corgi has been killed in Shanghai
The owner was quarantined and tried to take the dog away. Corgi was beaten to death as soon as the owner left pic.twitter.com/F1M7bJ93H2

As drone patrols the streets looking for anyone who exercises the human desire to go outside, in a lockdown, which many people feel is engineered to terrorize the people and has nothing to to with safety.

We can’t turn a blind eye to what’s happening right now in China. We have a special guest from Shanghai coming on the show tomorrow to talk about the despotic Chinese regime, but we can’t share his identity, or he might end up like this person… or worse.pic.twitter.com/WUnRaGx33S

This world I’m living in is getting crazier everyday…… I have to post here bc they keep deleting videos like this on Chinese social media. I never felt this shamed and helpless, people in Shanghai deserved better.#上海疫情 #Shanghai #China pic.twitter.com/Y5rBuIMvgK