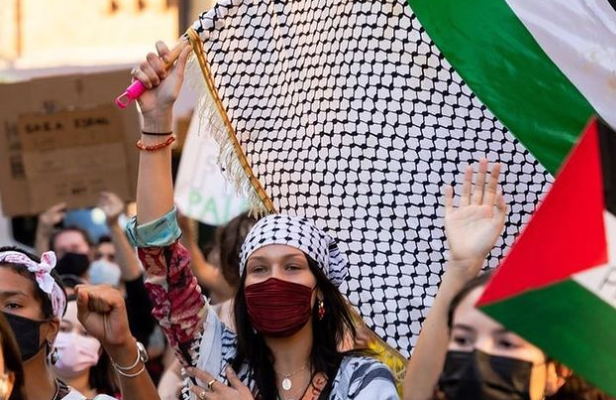 Palestinian-American supermodel Bella Hadid, who has been outspoken about her anti-Israel views for years, has a staggering 51 million followers on Instagram.

But now, her content — which is often factually and historically incorrect and, critics warn, promotes Jew hatred — is being exposed to an even wider audience.

As an explanatory comment about Hadid’s post, the prominent magazine wrote that the model was “highlighting the storming of #Palestine’s #AlAqsa Mosque by Israeli forces.”

Anti-Israel Arab media outlets often use the word “storming” to describe the presence of Jews anywhere on the Temple Mount, including those quietly walking or praying.

“How many army units does it take to arrest a child? How many times does a young strong military man, with guns, bullet proof vests, power, have to kick down their elder to feel more powerful?” read Hadid’s post.

“How many babies and children have to be murdered by a government system before people start to care?”

It was unclear to which babies or children allegedly killed by Israel Hadid was referencing in her statement, as the videos included in her post showed arrests of adults on the Temple Mount.

Hadid also claimed that she was the victim of an attempt to shut down discussion about Israel’s supposed human rights abuses.

“If you really would like to silence me, just like the journalists, or really anyone trying to educate about Palestine, @instagram, I will continue to come forward with peace, showing factual information about how the IDF, Israeli government, and Settlers attack innocent Palestinians for no reason, except for simply being Palestinian,” Hadid wrote.

“This is all a breach of human rights, and if you continue to sensor [sic] us, is [sic] the biggest form of bias and Unjust censorship”