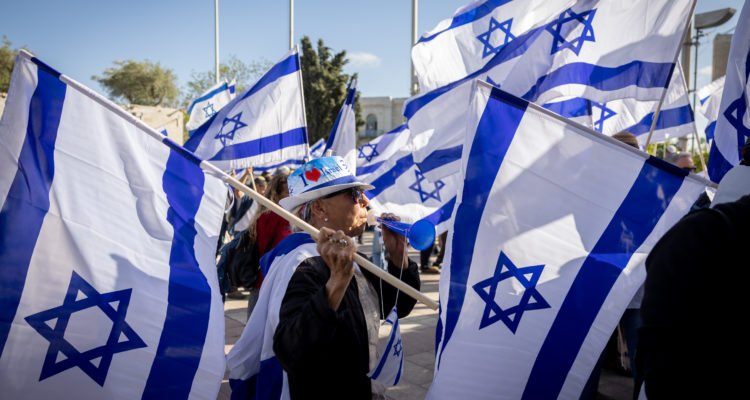 Tensions in Israel’s capital city were high on Wednesday.

Terror groups issued threats against Israel over widespread arrests of Temple Mount rioters, thousands of Jews gathered in the morning at the Western Wall for a priestly blessing during the Passover festival, and religious Zionist groups were slated to march around the Old City with Israel flags later in the day.

After a deterioration in public safety for Jews in Jerusalem, which has seen numerous observant Jews attacked in brutal, unprovoked assaults and municipal buses stoned by Arab rioters, Zionist groups announced a flag march around the capital city for Wednesday evening.

On Wednesday morning, Hamas-affiliated al-Aqsa Radio said that faction leaders had met in the Strip and declared that it was ready for escalation in order to “defend” the Temple Mount mosque and Jerusalem.

“Our finger is on the trigger,” a Hamas spokesman said.

“The leadership of the occupation will bear full responsibility for the consequences of this Flag March or any other dangerous and provocative actions,” the terrorist group warned.

“We will raise our heads and the flag, and especially now we will raise Jerusalem with our greatest joy,” the march organizers wrote on social media, adding that “we have no intention of shying away from the threats of anyone who wants to intimidate us. Especially now, we will march proudly with flags.”

Israeli police, however, denied permission for the Zionists to march throughout the Old City, saying that such an event would be provocative and anger local Arabs. The authorities would need to deploy an additional 1,000 security officers to protect participants, they said.

Around 400 participants marched in downtown Jerusalem but were prohibited from reaching the flashpoint Damascus Gate entrance to the Old City. Police positioned squad cars and trucks in the area, and policemen on horses were seen on the streets. Some clashes ensued.

“We will not permit MK Itamar Ben Gvir to approach Damascus Gate, and from a legal perspective, we are entitled to prevent him from going there,” the police stated.

Ben Gvir disagreed, citing parliamentary immunity. He later said that he would not press the issue, calling the police decision “shameful.”

One unnamed police official sparked controversy by telling Israeli media that the organizers’ insistence on holding the march, despite disapproval from security authorities, was “like someone insisting on holding a gay pride parade in [ultra-Orthodox city] B’nei Brak.”

March organizers fired back in a statement, saying that “we couldn’t have known there would be terrorist attacks [and] that the Old City would be silent during Passover,” referencing an atmosphere of fear that has seen Jerusalem sites, which are typically bustling during the holiday period, uncharacteristically empty.

“All those who wanted to come to the capital [during the holiday] suffered a moral blow,” Matan Peleg, CEO of  the Im Tirtzu Zionist organization, told Army Radio. “We want to show there’s nothing to fear.”

Noam Nisan, one of the march’s organizers, told Kan News: “A Jew with a flag in Jerusalem is not a provocation,” adding that the march was a response to the violence against Jews in the Old City in recent days, particularly the attack on a bus taking passengers to the Western Wall.