In groundbreaking step, Muslim delegation participates in 2022 March of the Living - The Jewish Voice

In groundbreaking step, Muslim delegation participates in 2022 March of the Living

BY DAVID ISAAC (JNS) POLAND—A Muslim group including participants from across the Arab world took part for the first time in the International March of the Living, the annual 1.9-mile walk from the concentration camp at Auschwitz to the extermination camp of Birkenau in Poland to commemorate the victims of the Holocaust. The precedent-setting move was the brainchild of Sharaka, an organization of young Israeli and Gulf State leaders formed in the wake of the Abraham Accords.

Deri said the idea to participate in the March of the Living, which takes place annually on Israel’s Yom Hashoah, or Holocaust Martyrs’ and Heroes’ Remembrance Day, came to fruition gradually, starting with a trip in December 2020 for young Arab influencers to Israel, in which they visited Yad Vashem, Israel’s official memorial to the Holocaust.

“After that visit, they said they wanted to listen to a Holocaust survivor, who would tell them the story. So last year, we held a Zoom event with more than 250 people from all over the Arab world. It was during COVID-19, and we couldn’t come here,” Deri told JNS on the grounds of Auschwitz.

“We promised that the next time it would be possible to be here on Holocaust Remembrance Day, we would come,” he said.

Deri attributes the timing of the visit to the Abraham Accords agreements signed between Israel and several Muslim states in the fall of 2020. “It has allowed people to express themselves. They feel more comfortable than they did three or four years ago,” he said, adding that the Muslim participants are “definitely” taking a risk and could face backlash in their home countries. “They’re brave to do it, and we appreciate them for doing so.”

One delegation participant, Rawan Osman, told JNS of her own dramatic transition, from having a “panic attack” when she first saw religious Jews after moving to Germany to becoming the only Arab at the Center for Jewish Studies at the University of Heidelberg.

Originally from Damascus, Osman grew up in Lebanon, the child of a Syrian father and Lebanese mother. She was taught that Jews are the enemy. “It took many years of reading and not necessarily sharing what I thought with my own family, especially on my mother’s side, who are Shi’ites and influential in Lebanon,” she said.

She said anti-normalization laws exist in Lebanon and Syria where even person-to-person relations with Israeli Jews are criminalized. “It means that you are not allowed to tell me your story, and I’m not allowed to tell you my story. But once you listen to Jews, you start feeling hope that peace can be achieved. We just need to get rid of the barriers between us,” she emphasized.

“This is crazy what we’re doing,” said Osman. “We’re in Auschwitz, a delegation of Arabs and Israelis. I hope that in 10 to 20 years’ time, this won’t be news, that this will be boring. And our children and grandchildren will not understand how massive, how groundbreaking [it is] what Sharaka is doing.” 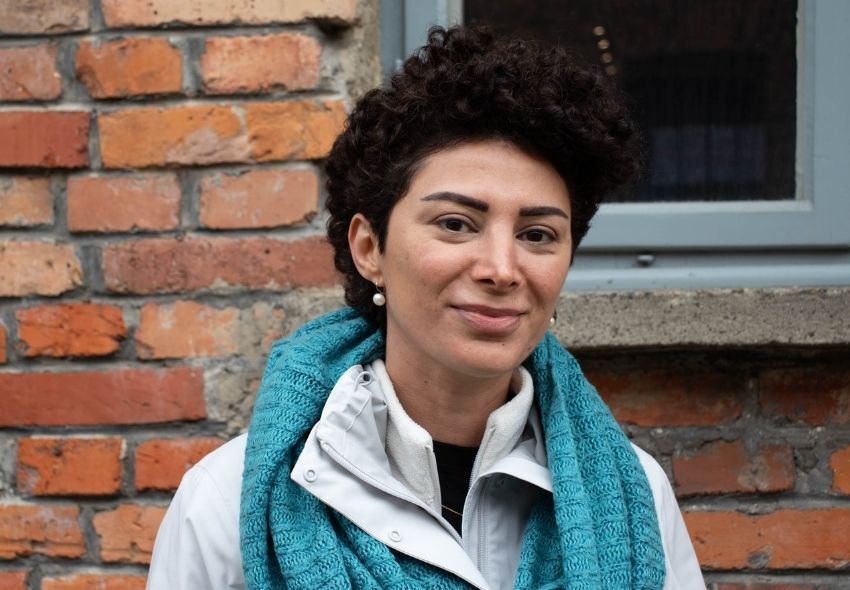 Fatema Al Harbi, a Bahraini author and peace activist who serves as Sharaka’s director of Gulf affairs, had a different journey, having expressed curiosity about Israel from an early age.

“I’ve always told my parents, ‘One day, I’ll go to visit Israel.’ I wanted to see the unknown,” she told JNS.

Even so, when she was invited to Israel by Sharaka in 2020 after the signing of the Abraham Accords, she was afraid. To her surprise, she found more similarities than differences. “For me, it started off loving being a part of the peace advocacy, starting to educate people more about Israel,” she said. “I was known as the girl that went to Israel in 2020.”

The situation took a dark turn, however, when people started attacking her on social media. Undaunted, she continued posting about Israel. “I kept answering people’s questions, and then something very interesting happened. People actually started to show an open mind. They started asking real questions. They wanted to know more,” she said. “They actually wanted to visit Israel. It was fascinating to see this shift in a very short period.”

Al Harbi also talks about the Holocaust on social media. “People were shocked because they’ve never had someone speaking about it publicly in the region,” she added.

Her own exposure to Holocaust history is recent, dating from that trip to Israel and Yad Vashem. “When I first went there, I was shocked by the pictures, the names, the simplest details of the story. It was my first encounter with the full story about the Holocaust. We were never taught about it. No one talked about it. People tried to ignore it or deny it,” she said.

But she noted that “it’s important for us to learn about it more to ensure that this could never happen again” and hopes Bahrain will add Holocaust education to its curriculum.

Deri said he’s optimistic about the future as more and more individuals like the participants in the delegation join Sharaka’s efforts. “In every country, including the Arab countries, there are positive forces, individuals who understand that Israel is not the problem, it is the solution for a better Middle East.”