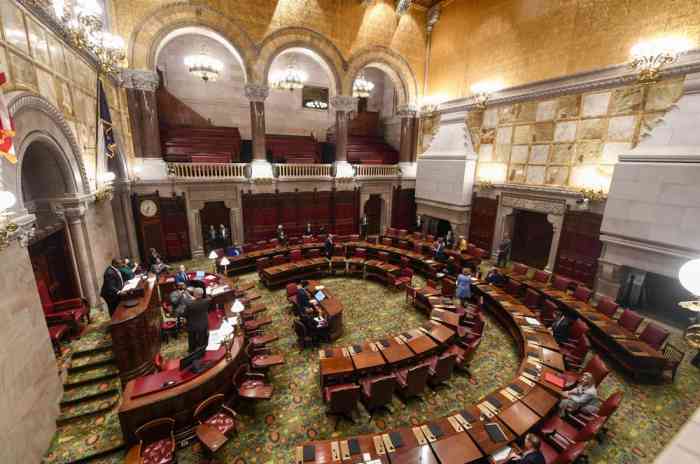 The New York Post reported that the deal was announced six days after its April 1st deadline and with Albany’s legislative leaders conspicuously absent. The budget was delayed in part over disagreements on whether to roll back parts of a landmark 2019 law that largely did away with cash bail for nonviolent offenses, as was reported by the AP.

“We had some very complicated issues to resolve,” Hochul said Thursday, according to the Post report, during an appearance at the State Capitol to announce the deal. “It’s taken a little extra time. I appreciate everybody’s patience.”

The deal includes changes to 2019 bail reforms that left judges with no discretion to keep alleged criminals in lock-up if they still pose a danger to the public, along with a mammoth multi-million taxpayer subsidy for a new Buffalo Bills stadium, as was reported by the Post.

The AP reported that lawmakers have also agreed to Hochul’s plan to earmark more than $600 million in state funds to help the NFL’s Buffalo Bills construct a new stadium.

Hochul had disrupted the budget negotiations by introducing the stadium proposal only in recent weeks, and some fellow Democrats were upset by the size of the government subsidy, as was reported by the AP. With all state and county money for construction and operating costs included, the government contributions to the stadium would exceed $1.1 billion.

The AP reported that many parts of the budget deal were aimed at easing the financial burden on segments of the public as the state continues to recover from the pandemic, while dealing with inflation and rising prices.

A suspension of the state’s gas tax and a three-year extension of the popular pandemic business booster “booze to go” provision were also included in the final budget deal.

Hochul said at a news conference that, “the cumulative effect is very impactful for people as they go to the pump and have that sense of stress in their in their chest when they think about the cost of the gas.”

The budget deal would direct $800 million to the state’s exhausted COVID-19 rental relief fund and $250 million to help New Yorkers who fell behind on utility bills amid the pandemic, as was reported by the AP.

Hochul’s budget director, Robert Mujica, said the final budget deal is $4 billion over the governor’s original $216 billion proposal thanks to a budgetary surplus and higher-than-expected revenues. The AP also reported that he said the budget is still on track to send 15% of revenues to rainy day funds.

Hochul said lawmakers will pass a major expansion of the state’s childcare subsidies, with a $7 billion investment over four years. Specific details, including eligibility, were unclear Thursday, according to the AP report.

The budget deal would direct $800 million to the state’s exhausted COVID-19 rental relief fund and $250 million to help New Yorkers who fell behind on utility bills amid the pandemic.

Lawmakers planned to begin voting Thursday evening on the budget, which was due April 1 but had been held up by last-minute policy and spending disagreements. Senate Leader Andrea Stewart-Cousins said the “hope” is to wrap up work Friday, as was reported by the AP.

Speaking alongside Lt. Gov. Brian Benjamin — but with neither Assembly Speaker Carl Heastie (D-Bronx) or state Senate Majority Leader Andrea Stewart-Cousins (D-Westchester) present — Hochul said the bail reform changes include provisions to make more repeat offenses, hate crimes and gun charges bail-eligible, and allow judges to consider an individual’s criminal history to determine whether they could cause harm to a person or group of people, according to the Post report.

Centrist Democrats demanded changes, concerned about an uptick in violent crime during the COVID-19 pandemic.

Some specifics of the bail changes are still being worked out, but elements of the deal would let judges require more people to post bail to gain their freedom while awaiting trial if they had repeatedly been arrested for similar crimes, Stewart-Cousins said, according to the AP report.

Hochul said that Kendra’s Law, which allows the state to institutionalize people whose mental illness makes them a danger to others, will be made “more effective.” State discovery laws, which have complicated prosecutors’ ability to try cases, will be adjusted to give more leeway in what documents must be shared with defendants by a state-mandated deadline, according to the Post report.

The AP reported that New York passed that law on a trial basis in 1999, when 32-year-old Kendra Webdale was pushed in front of a subway train by a man living with untreated schizophrenia. The law is set to expire June 30 unless legislators grant yet another extension.

The agreement does not include the “dangerousness standard” pushed by the governor and Mayor Eric Adams, which would have given judges more discretion to keep defendants behind bars.

“To the New Yorkers that are concerned about a rise in crime, we have put forth a comprehensive package,” the governor said, as per the Post report.

New York is also poised to replace the embattled, politically appointed Joint Commission on Public Ethics with a new ethics body whose leaders would be selected by legislators and the governor, but approved by law school deans, according to the AP report.

The budget deal would direct $800 million to the state’s exhausted COVID-19 rental relief fund and $250 million to help New Yorkers who fell behind on utility bills amid the pandemic.

Hochul’s budget director, Robert Mujica, said the final budget deal is $4 billion over the governor’s original $216 billion proposal thanks to a budgetary surplus and higher-than-expected revenues. He said the budget is still on track to send 15% of revenues to rainy day funds.

Hochul said lawmakers will pass a major expansion of the state’s child care subsidies, with a $7 billion investment over four years. Specific details, including eligibility, were unclear Thursday.

The state would spend $7.4 billion over several years to give a $3-per-hour raise to home care aides, who bathe, feed and provide other non-medical services in clients’ homes. The AP reported that aides generally are private employees, but the state Medicaid program funds about 90% of their services.

In a blow to Mayor Eric Adams, the budget does not deal with mayoral control of New York City public schools and a revamped version of the real estate tax break 421-a meant to incentivize development of affordable housing that expires in June, according to the Post report. Adams had vigorously advocated for these measures.

The Post also reported that after Adams requested a three-year extension of mayoral control of public schools, Hochul promised to grant him four years, prompting Adams to hold a press conference earlier this month making the case for the importance of state lawmakers “mayoral accountability” on public schools for the remainder of his first term.

The topic hasn’t been discussed in state Senate or Assembly Democratic conferences in the final weeks of budget negotiations, legislative sources told The Post last week.