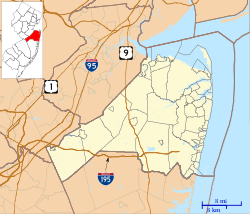 After a three-year legal imbroglio in the small town of Deal in Monmouth County, New Jersey, it appears that a resolution has been reached in a real estate case.

According to a report on the nj.com web site, Deal resident Isaac Chera who is seeking to purchase a strip of borough owned land at the end of Neptune Avenue for $1 million has now agreed that if given the approval to make this purchase of the oceanfront property that he will build a staircase to allow the public to have access to the beach.

Opposed to the sale of the strip of land is the American Littoral Society and as such in 2019 they filed a lawsuit to prevent the sale to a private individual, according to the nj.com web site.

The site indicated that after lengthy legal wrangling, the American Littoral Society  this week announced it has “reached a settlement with Chera and the borough that will allow the sale to go through.”

The design plans of the new staircase will be handled by the local Monmouth County government and Chera will be bankrolling it. According to the agreement, this situation will be guaranteeing public access to the oceanfront “in perpetuity.”

Speaking to nj.com, Tim Dillingham, the executive director of the American Littoral Society said, ‘It’s a win for everybody. “Mr. Chera will build the stairs. The borough can sell the property. And the public will have access to the beach,” he added.

Nj.com reported that Chera is the owner of the adjoining lot next to the sliver of borough-owned property.

The tiny strip of land which is less than acre was appraised at $160,000, according to Fernicola, as was reported by mj.com. Deal resident Chera, however, has agreed to buy it for $1 million for it so that he can have the ability to extend his property line, Fernicola said.

Initially, the American Littoral Society attempted to block the sale of the strip of land and filed site. They argued in court that any measure aimed at privatizing the land would effectively prevent the public from having access to the beach, according to the nj.com report. The foot of Neptune Avenue was recently replenished by the US Army Corps of Engineers, according to the nj.com web site. The report indicated that is has been utilized for many years by fishermen and surfers for access to the beach.

The settlement also requires that nothing be planted or built at the end of Neptune Avenue that would obstruct the public view of the ocean, according to the nj.com web site.