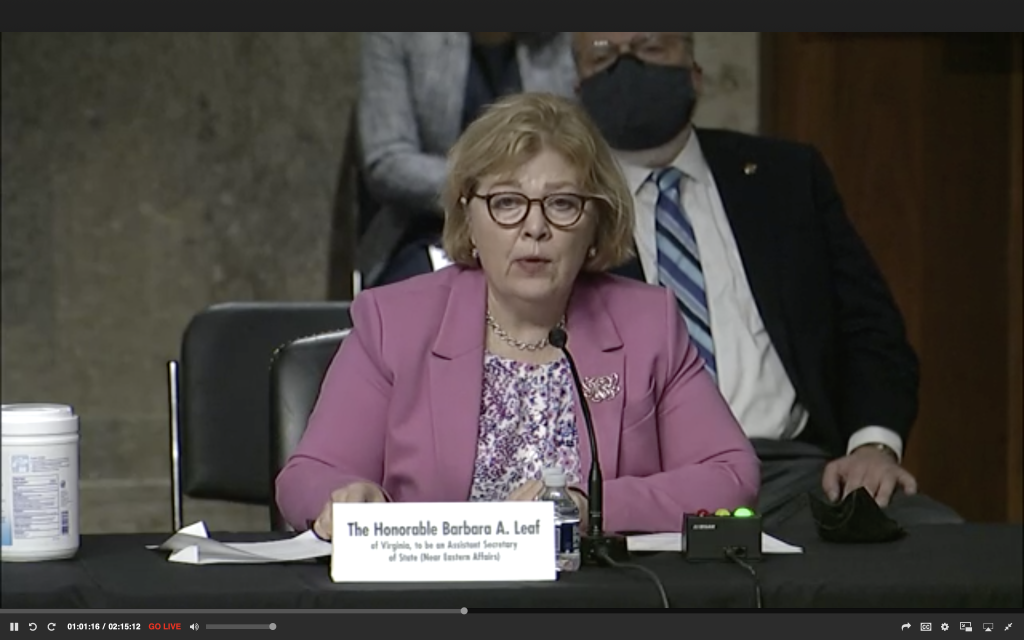 Three Senate Republicans shattered party unity to advance the nomination of a State Department nominee who has been accused of lying to Congress about the terms of a new nuclear agreement with Iran.

On Tuesday, the nomination of Barbara Leaf, a veteran Democratic foreign policy hand who was nominated last year to serve as assistant secretary of state for Near Eastern affairs, was approved by the Senate Foreign Relations Committee after three Republicans—Sens. Mitt Romney (Utah), Rand Paul (Ky.), and Rob Portman (Ohio)—abandoned their party to help Democrats push the nomination to the finish line.

Leaf’s nomination will come to a full vote in the Senate and will likely be approved if these Republicans abandon their colleagues to vote in her favor.

Leaf has seen her nomination blocked from a vote for nearly a year by Sen. Ted Cruz (R., Texas), who maintains that during her confirmation hearing last year in the Senate she provided inadequate or false answers about the Biden administration’s policies on Iran, the Muslim Brotherhood, and peace agreements between Israel and its neighbors.

The contested vote came at a precarious time for Senate Democrats, who had to delay Leaf’s vote last week due to poor attendance from committee Democrats.

The showdown over the vote comes as the Biden administration is working with Russia to secure a revamped nuclear deal with Iran. The administration is poised to remove Iran’s Islamic Revolutionary Guard Corps from the terrorist list as part of concessions meant to entice Iran into accepting an accord that will provide it with billions of dollars in cash windfalls.

Leaf’s nomination was seen as a proxy vote for the Biden administration’s nuclear deal and a bellwether for the Republican opposition.

Cruz spearheaded a Republican campaign to highlight Leaf’s efforts to mislead lawmakers about the terms of a new nuclear accord.  Leaf, in written testimony to Cruz that was viewed by the Washington Free Beacon, said in September that the Biden administration was not seeking a deal with Iran that is separate from the original 2015 accord, known as the Joint Comprehensive Plan of Action.

Asked for the details of a potential, weaker new deal, Leaf said, “There have been no such arrangements, deals, or agreements contemplated to reduce pressure on Iran.”

Cruz and other Republicans say Leaf’s response was meant to obfuscate efforts by the Biden administration to ink an accord, which they are calling a “less-for-less” deal with Iran.

Sen. Marco Rubio (R., Fla.), an anti-Iran-deal hawk who voted against Leaf, told the Free Beacon that he could not support “such a naïve and dishonest nominee.”

“Barbara Leaf is yet another Biden foreign policy ‘expert’ who will serve as a polite and orderly caretaker of America’s decline,” Rubio said. “Leaf is advocating for a deal with an openly anti-American regime that would put nuclear weapons into the hands of the Ayatollah, even as he sponsors attacks on American service members. Her refusal to admit to negotiations with Tehran proves that she has no problem doing all this behind the backs of the American people.”