Kanye West: Hitler’s Bad Reputation Was ‘Made by Jewish People’ Who ‘Control the Majority of the Media’ 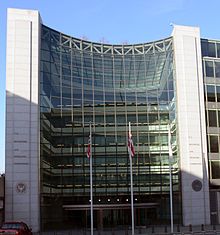 ABC’s Christoforous: Labor Force Participation Decline the Opposite of What You See ‘in a Healthy Economy

Amazon CEO: ‘We Have to Allow Access’ to Antisemitic ‘Hebrews to Negroes’ Documentary — Fails to Mention Past Censorship on Other Topics

Parshas Vayishlach – What Difference Does it Make?

By Thomas Catenacci(DCNF) The U.S. Securities and Exchange Commission (SEC) proposed rules that would force companies to publicly disclose a wide-range of climate-related information.

The SEC, the nation’s top financial regulator, would require publicly-traded companies to disclose how “severe weather events and other natural conditions” may impact their business, under the proposed rules, according to the Monday announcement. Companies would also be forced to publish the greenhouse gas emissions produced from their operations.

“I am pleased to support today’s proposal because, if adopted, it would provide investors with consistent, comparable, and decision-useful information for making their investment decisions, and it would provide consistent and clear reporting obligations for issuers,” SEC Chairman Gary Gensler, who President Joe Biden appointed in February 2021, said in a statement.

“Today’s proposal would help issuers more efficiently and effectively disclose these risks and meet investor demand, as many issuers already seek to do,” he said. “Companies and investors alike would benefit from the clear rules of the road proposed in this release.”

In addition, companies would be required to share their transition plans as part of their “climate-related risk management strategy,” the proposal stated.

The commission published a complete list of a dozen requirements companies must comply with under the rule.

“The proposal will undermine the existing regulatory framework that for many decades has undergirded consistent, comparable, and reliable company disclosures,” SEC Commissioner Hester Peirce, the agency’s lone Republican, said during a hearing on the proposal held Monday. “We cannot make such fundamental changes to our disclosure regime without harming investors, the economy, and this agency.”

Peirce, who said she wouldn’t support or vote for the measure, added that the SEC lacks the authority to propose such a rule.

“Congress, however, did not give us plenary authority over the economy and did not authorize us to adopt rules that are not consistent with applicable constitutional limitations,” she said. “This proposal steps outside our statutory limits by using the disclosure framework to achieve objectives that are not ours to pursue.”

The SEC is currently made up of four members, three of which are Democrats. The independent agency is a five-person panel, but former Commissioner Elad Roisman, another Republican, resigned in January, creating a vacancy for Biden to fill.

Republican lawmakers have ripped the SEC for considering climate measures, echoing Peirce’s argument that Congress should issue such sweeping laws.

“Today’s action hijacks the democratic process and disrespects the limited scope of authority that Congress gave to the SEC. This is a thinly-veiled effort to have unelected financial regulators set climate and energy policy for America,” Senate Banking Committee Ranking Member Pat Toomey said in a statement shared with the Daily Caller News Foundation. “Forcing publicly-traded companies to gather and report global warming data—almost none of which is material to the business’s finances—extends far beyond the SEC’s mission and expertise.”

“The last thing the American people need are unelected regulators advancing policies by partisan vote that will cause energy costs to further rise,” he said.

In June 2021, Toomey wrote a letter, signed by his fellow Banking Committee Republicans, to Gensler and Commissioner Allison Herren Lee, urging the pair against pursuing the disclosures rule. Companies are already required to disclose global warming-related information, the letter said.

“The Biden Administration is pushing its climate agenda through financial regulators because they don’t have the votes to pass it in Congress,” House Financial Services Committee Ranking Member Patrick McHenry said in a statement. “The SEC’s proposal to require disclosure of information related to climate change that is not material for most companies is tone-deaf and misguided.”

Parshas Vayishlach – What Difference Does it Make?

10 Things to Do in the Pocono Mountains in December