Letter to The Editor: While the Ukraine War is going on, The Iran Deal is Secretly Happening. - The Jewish Voice

Letter to The Editor: While the Ukraine War is going on, The Iran Deal is Secretly Happening. 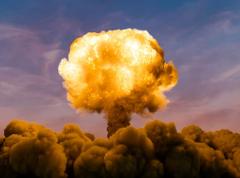 A Message to Biden – The Drumbeats of War Have Already Begun

According to Reuters News and Iran’s Foreign Minister , “The Iran Deal is closer than ever”. We must do whatever it takes to stop it.

The Ukrainian War and Supreme Court Nomination gave President Biden the perfect cover to push for the NEW Iran Nuclear Deal, because the media is more focused on other issues rather than discussing the Iran Deal. It is a typical political move that happens more than it should. Using a terrible situation to push an agenda while everyone else is concentrating on other issues.

A call to action is much needed. Every single person needs to call their Senators and Congressmen and make their voices heard ASAP. If that means call every day, then call every day. Tell them that you will stop donating until they say in writing, I do not support the New Iran Nuclear Deal. Call every single hour until they threaten you and say, “stop calling or else.”  If calling every day and hour makes you become an annoying person, Great. Mission somewhat accomplished. Now they are listening to you. If you want to take it a step further. Stop by their offices and ask to speak to your representative and make your voices heard that way. We need to stand united against a nuclear Iran. This is not a Republican or Democrat issue, this is a global issue.

The threat of a nuclear Iran is coming closer than most people think and we need to do everything we can to stop them. I encourage everyone to stand united against the new Iran nuclear agreement.

Share
Facebook
Twitter
Pinterest
WhatsApp
Previous articleIvanka Trump Donates 1 Million Meals to Ukrainian Refugees; Amounts to 158,400 Pounds of Food
Next articleSenators on Ketanji Brown Jackson’s School Indoctrination: What Did She Know and When Did She Know It?