A Dutch publisher has said that it will cease publication of a best-selling book, “The Betrayal of Anne Frank,” and remove it from bookstores, in response to a report by historians that objects to its finding, according to a recent report in the New York Times.

The Times also reported that the book had claimed to identify the informant who alerted Nazi police to the Frank family’s hiding place, but the report’s authors said the conclusions were based on “faulty assumptions” and “careless use of sources.”

The U.S. publisher of “The Betrayal of Anne Frank: A Cold Case Investigation” announced Wednesday that it will continue to sell the book, according to an AP report.

The AP report also indicated that the cold case team’s research, published early this year in a book by Canadian academic and author Rosemary Sullivan, immediately drew criticism in the Netherlands.

The publisher, Ambo Anthos, which released the Dutch translation of the book by Rosemary Sullivan, a Canadian author, on Jan. 17, said on Tuesday that it would halt publication in response to the “refutation” by prominent Dutch historians, according to the Times report.

“Based on the conclusions of this report, we have decided that, effective immediately, the book will no longer be available,” Ambo Anthos, which had apologized for the book last month, wrote in a statement on its website. “We will call upon bookstores to return their stock.”

The book alleged that the person who revealed the location of the Frank family’s secret annex hiding place was likely a prominent Jewish notary, Arnold van den Bergh, who disclosed the location in an Amsterdam canal-side building to the German occupiers to save his own family from deportation and death in Nazi concentration camps, as was reported by the AP.

The Franks were arrested on Aug. 4, 1944, and deported to concentration camps, where Anne, her mother and sister died. Only their father, Otto Frank, survived the war, according to the Times report.

In a 69-page written refutation, the historians said the book “displays a distinct pattern in which assumptions are made by the CCT (Cold Case Team), held to be true a moment later, and then used as a building block for the next step in the train of logic. This makes the entire book a shaky house of cards, because if any single step turns out to be wrong, the cards above also collapse.”

The Times reported that recognized Holocaust historians and experts on the history of World War II had grave doubts about the finding in the book. They questioned the veracity of the argument’s main premise which focused on the notary who had access to lists of Jewish hiding places that were compiled by the Amsterdam Jewish Council, an organization the occupying Nazis had set up in 1941, as was reported by the Times.

The AP reported that in response, the cold case team’s leader, Pieter van Twisk, told Dutch broadcaster NOS the historians’ work was “very detailed and extremely solid” and said it “gives us a number of things to think about, but for the time being I do not see that Van den Bergh can be definitively removed as the main suspect.”

In an interview with the Times, van Twisk said at the time, that the evidence for the lists was “circumstantial, but circumstantial evidence is still evidence.”

The AP reported that since the book’s publication in January, the team has published detailed reactions to criticism of its work on its website.

Dutch filmmaker Thijs Bayens, who had the idea to put together the cold case team, conceded in January that the team did not have 100% certainty about Van den Bergh. “There is no smoking gun because betrayal is circumstantial,” Bayens told The Associated Press at the time.

Ronald Leopold, the director of the Anne Frank House museum based in the building where the Frank family hid in Amsterdam, said in January that there remained “many missing pieces of the puzzle. And those pieces need to be further investigated in order to see how we can value this new theory,” as was reported by the AP.

On Wednesday, the AP reported that Leopold said question marks the museum had in January about the cold case team’s conclusions “are supported by the counter-examination of leading historians. You may not consign someone to history as Anne Frank’s betrayer if you do not have conclusive proof. We hope that this counter-investigation clears Van den Bergh’s name from blame, also for his relatives, including granddaughter Mirjam de Gorter.” 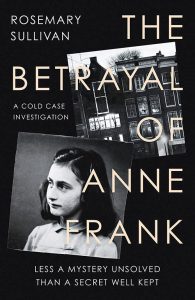 The Times reported that de Gorter had issued an emotional public appeal to HarperCollins, which released the book in the U.S. with plans to publish it in more than 20 languages, asking that the publisher issue a retraction and cease publication.

de Gorter said that the investigators from the team approached her in 2018 without telling her that her grandfather was a main suspect, even though, as Sullivan wrote in the book, they were already seriously considering him as the betrayer, according to the Times report.