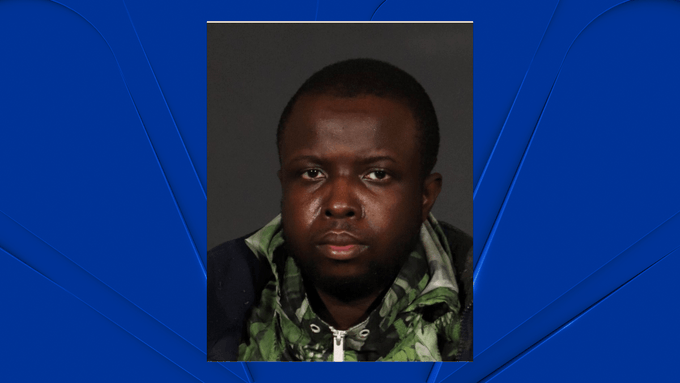 By NICK GILBERTSON A man who has a track record of assaulting strangers allegedly punched a four-year-old boy in the head in Times Square on Thursday, authorities say.

Police say the attack occurred around 3:20 p.m. at the corner of 7th Avenue and West 46th Street when Babacar Mbaye, 34, randomly pummelled the small child who was with his 43-year-old mother, WABC reports.

Surveillance footage obtained by the New York Post shows two women, one of whom is the four-year-old’s mother, going after the suspect. One of the women tackled the perp to the ground while the other swung an object in her hand while standing over him, the footage appears to show. Two police officers then burst into the frame, with one of them engaging the suspect on the ground as the woman who was battling the man gets up, the video allegedly shows. It is unclear which woman is the boy’s mother, the Post reports.

The boy received medical attention at the scene in Times Square.

While being taken into custody, Mbaye allegedly kicked a police officer.

Prosecutors said that once he was in custody at Bellevue Hospital, he allegedly told police that he “drank a whole bottle of hand sanitizer” and added, “I shouldn’t have done this,” the Post reports.

He was charged with felony assault, reckless endangerment, and resisting arrest, prosecutors and police said. He was arraigned on Friday.

A New York City Police Department (NYPD) spokesman told WNBC that Mbaye has 40 prior arrests. His record, which dates back to 2009, includes arrests for criminal possession of a weapon, assault, driving while intoxicated, and menacing, sources told the Post. Additionally, he has 16 misdemeanor convictions on his record, prosecutors said.

At the time of Thursday’s attack, he was on supervised release for three open misdemeanors related to “assaulting strangers,” which date back to last summer, prosecutors said, per the Post. Two of the attacks happened in the past month; one where he “pushed a stranger and punched her twice in the shoulder,” and another in which he “punched a stranger in the head,” prosecutors said.

Thomas Kenniff, Mbaye’s lawyer, said the defendant lives with his mother and siblings and is unemployed.

He was dancing in the midst of Times Square and inadvertently made contact with the child … which drew the ire of the child’s mother who maybe perhaps reasonably believed that he intended to strike the child. But I’m confident that was not his intention.

Mbaye is due back in court on Wednesday.